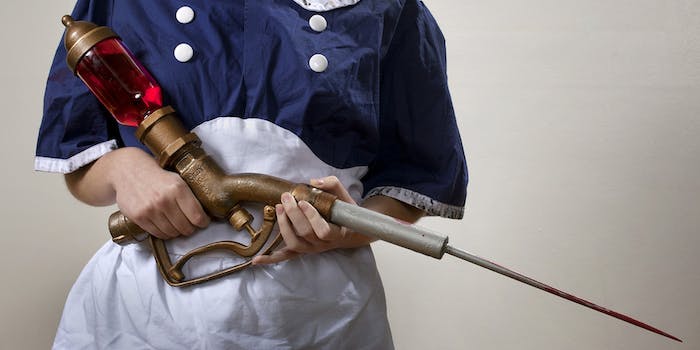 The Internet can be a tool for misinformation and fear, and it's our job to fight it.

Among embarrassments to the contemporary Left, few are more shameful than the anti-vaccination movement. Liberals—we climate change champions, we Darwin defenders and NASA funders and Cosmos watchers, we sharers of I Fucking Love Science memes—have given birth to one of the nation’s most reviled subsets of scientific skepticism, second only to climate denial in its flirtation with dangerous stupidity.

While largely apolitical these days, the anti-vaccination movement’s origins are distinctly left wing, proffered by what the Right might call “Hollywood Types” (read: Jenny McCarthy) and spread over the decades by a network of niche blogs, health fads, and the odd Huffington Post-enabled megaphone. It is the perverse culmination of Whole Foods environmentalism; a middle-class, leftist fetish now, evidently, dedicated to the restoration of a more “natural” order of infant mortality.

It’s humiliating. The whole business has opened a pretty clear spot-the-hypocrisy case for the Right, and that—if the literal welfare of children is insufficient—should be motivation enough to shutter this particular cottage industry. Say what you will about Noah’s Ark surfing the Grand Canyon; at least the reactionary zeitgeist, spare the odd faith healing fanatic, hasn’t yet made a crusade of mistrusting general practitioners.

But that lonely bright spot went dark this month. Thanks to Christy Murphy, a Michigan mother-turned-reactionary Internet folk hero, the Right finally has some skin in the medical skepticism game. It began when Duffy took her 17-year-old daughter to a local hospital for a foot injury and came away with a viral case of righteous indignation, brought on by a sign notifying parents of a new hospital policy. When treating minors aged 12 to 17, the notice explained, parents would be asked to leave the room for a five minute, private conversation between their child and a nurse.  Murphy’s emphatically-titled screed “I. Am. The. Mom.” takes it from there:

I asked if this policy was in effect and if so, how could I opt out. The receptionist told me it’s a new law and there is no opting out. Working to keep my cool, I said, “I’m sure there is.” She said, “No, there isn’t.” At which point I asked if I needed to leave and go to the urgent care center because I was not submitting my daughter to such a conversation.

That did not go over well.

If you hadn’t already guessed, the private conversation policy was designed in order to allow minors to discuss medical concerns they might be embarrassed or afraid to talk about in front of their parents—especially if your parents are anything like Christy Duffy, who seems to prefer risking her child living with undiagnosed neurosyphilis than to allow a doctor or nurse to “sequester my child in an exam room and talk to them privately.”

It wasn’t that Murphy didn’t grasp the purpose of the chat; rather, she feared its darker implications:

Make sure this is crystal clear: what they want to do is talk to your child about sex and drugs (maybe rock and roll—who knows?) without your input. Is it really such a stretch to imagine that a doctor who does not value abstinence before marriage would encourage your daughters—as young as 12!—to receive birth control? Is it really such a stretch to imagine a nurse telling a young boy—because a 12-year-old boy is a BOY—that she will give him condoms so he can be “safe”? Is this what you want told to your children without the ability to filter the info through your world view?

And so they left, daughter unexamined. Murphy posted her essay. Soon, it had been picked up by Glenn Beck’s The Blaze and the right-wing Independent Journal Review. Enter the amplifying power of the Internet: within a week, the story had been shared hundreds of thousands of times, rallying erstwhile doctor-friendly conservatives to defy the creeping socialism of standard patient history chats.

But reading the comments and the commentary, one gets the sense that the issue isn’t really about the particular horror of imagining sexually active children, or even chancing a frank chat about rock and roll. Rather, the appeal of Murphy’s cause to the Right seems predicated in a commitment to absolute familial autonomy, an extension of the paranoia that fueled Christian home school movements and resistance to deliberately multicultural PBS programming. “I. Am. The. Mom.”—damn medical school, damn sound policy: those aren’t the issues. It’s the principle of depriving parents of their right to control the so-called private sphere; to make progeny after their own image without the meddling of outside influences and so-called experts.

It’s the same logic that fuels the anti-vaccination movement. Confronted with alarming instances of measles and an ever-weaker herd immunity, they tend not to deny the evidence so much as consign it to the status of a secondary issue. At the end of the day, it’s about their absolute ability to make medical decisions for themselves and their families, no matter what kind of syphilitic, polio-hobbled, whooping cough of a future they’re colluding with the Murphy’s of the world to leave us.

Even as medical skepticism becomes a bipartisan undertaking, it is, at least for the moment, confined to the fringes. Only 13 percent of parents indulge “alternative vaccine schedules,” and in the weeks since Murphy’s Last Stand, her story hasn’t spread beyond the purest corners of tribal right-wing id—even Fox News hasn’t picked up the story. Most Americans, it seems, would still prefer a nation not hellbent on returning to the medical landscape of centuries past, when undetected and resurgent disease cut the average life expectancy in half.

But when we consider the fundamental issue at play, it becomes a more difficult task. We are all prepared to encourage vaccination and STD detection, but are we prepared to do what that would require and push back against the holy principle of absolute medical autonomy? To think we will persuade anti-vaccers and sex-talk skeptics with rational argument is wishful thinking. The solution is not through their consent; rather, it would require limiting, by law, the ability of parents to overrule the doctors of their offspring.

I suspect that that’s a bridge too far even for many who are otherwise compliant in matters of their children’s health. But what is the alternative? Remember that amongst the paranoid set, such an effort is already under way. If we can’t convince them otherwise, then we might as well make it so and win ourselves a safer country in the process.

Emmett Rensin is an essayist and playwright in Chicago, IL. His previous work has appeared in The Atlantic, New Republic, Los Angeles Review of Books (where he is a contributing editor), and elsewhere. Follow him on Twitter @revemmettrensin.