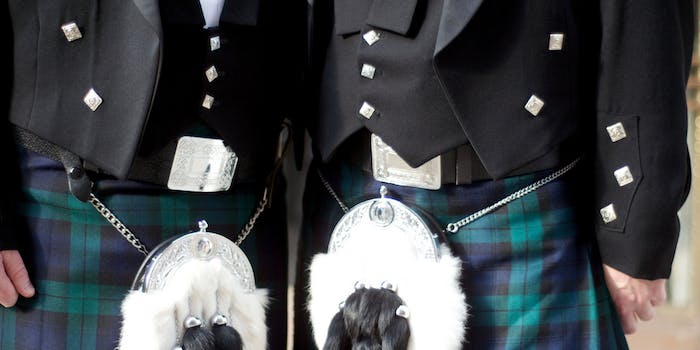 It could happen anywhere, at any time. A train station. A Disney Channel show. The NFL draft. Your kids are just hanging out, being kids and daydreaming about candy, when suddenly they see two dudes kissing. Or maybe they spot a little girl in the drop-off line at school. She kisses her mom goodbye—and then she kisses her other mom goodbye.

You feel a tug on your leg, you look down, and there’s your kid. He just saw the same thing you saw, and now he looks up at you with his innocent face and says, “Yo, what’s the deal with that?”

As a gay man, I know I’ve spurred conversations like this myself—by doing just what Michael Sam and his boyfriend did on live TV. I want to be clear first of all that I don’t kiss my husband in public because I want to confuse your child or piss off right-wingers, although I’m aware that both of those things might happen as a result. I’m kissing him because I love him and I’m probably saying hello or goodbye at the time. (I assure you. It will never be because I’ve just been drafted by a professional sports team.) When I kiss my husband, I’m not going to look around first to make sure your kid and/or Pat Robertson isn’t watching. I’m just going to kiss him and then go on with the rest of my day.

I understand you might be unprepared for what follows. So here and now, I’m going to do what I feel is only fair for someone in my position to do. I’m going to prepare you.

Obviously, what you say will depend on how old your kids are and how much exposure they’ve had to gay people previously, but in a broader sense, these suggestions should apply to anyone.

I’m not a child psychologist, just a gay dad who’s thought a lot about the issue and who has a big stake in it. After all, I don’t want your kids coming up to my kids one day and telling them they’re weird for not having a mommy.

If you don’t want that either, here are a few things to keep in mind:

Everyone’s concentrating on taking the negative connotation away from the word “gay,” but at the same time, let’s not forget to encourage the positive. We don’t want “gay” to be a curse, so go ahead and teach it to your kids. That’s how we’ll really take the sting out of the word.

“Oh, Uncle Doug and Uncle Max? They’re gay.” “Aunt Vera and Aunt Debbie aren’t sisters, honey. They’re lesbians.” “Well, statistics suggest at least 3 of the Smurfs must be gay.” Don’t make a big deal about it. Just say it. If your kids hear some jerk at school sneering, “That’s so gay!”, their response will be, “Yeah? So what? So are Uncle Max, Aunt Vera and, most likely, Brainy.”

Don’t play down the fact that your kids may have witnessed something unfamiliar. “Geez, Madison. They have two daddies, what’s the biggie?” It’s natural for poor little Madison to be confused, so give her a damn break.

Kids are probably going to assume all families have one mommy and one daddy, because that’s all most of them see. You can be honest. Use words like “most” and “some.” “Most families have a mommy and a daddy, but some have two mommies or two daddies.” “Most women marry men, but some women marry other women.” As long as you don’t attach a value judgment to those statements, it really is no biggie. (The same goes when explaining single-parent families, divorced families, or anything else your child might be witnessing for the first time.)

Some kids might say something like, “That’s weird,” or they’ll think you’re playing a joke on them. That should just be a reminder of why you’re having this conversation. Get to your kid before ignorance does. If you’re honest with them, they’ll get it.

3) Get Your Mind Out of the Gutter

It seems silly that I even have to say this, but when some people think about homosexuality and kids, they imagine that you’re suggesting they graphically describe intercourse to kindergarteners. Um, no. All you should be doing is answering the questions they’re asking, and save the rest for junior high health class. If they wonder why they saw two football players kissing, it’s because “Those two men are in love” or because “Some men love other men.” Hopefully, you’ve taught your kids to understand what love is, so no further explanation should be required.

And do use the word “love.” That’s what we’re talking about here. You don’t need to say “attracted to” or “some boys like boys.” “Like” is how they feel about each other. A kid might think, “Well, I like boys. I guess I’m gay.” Compare it to your own relationship (assuming you have a good relationship). “You know the way Mommy and I love each other? That’s how those two men or those two women feel about each other.” And if your kid says, “Yuck!” it’s probably because they feel the same way about when you and your spouse get all schmoopy-doopy with each other. That’s progress.

4) Don’t Make It About Your Kid–Yet

Understanding homosexuality is a big enough topic of discussion, and your kid probably won’t be prompted to wonder about their own sexuality at this point. You don’t need to say, “You might marry a man someday yourself, Junior!” While it’s great to plant the seeds of acceptance early, you’ll probably just end up confusing them more. Your kids have plenty of time to figure their own feelings out, and when the time comes, make sure you let them know that you love them no matter what. But no, they can’t marry Brainy Smurf.

5) If Your Kid Does Ask You to Speculate, You Can Tell Them They’ll “Probably” Be Straight

Again, only if your kid expresses some curiosity should you even broach the subject. But if they’re wondering, “Who will I marry someday?”, feel free to tell them, “You’ll probably marry someone of the opposite sex, but I’ll accept you either way.” Of course, if you’re like the mom from the amazing blog Raising My Rainbow, you “probably” might lean the other way. Just take your cues from your kid.

6) Remember the Magic Phrase, “Love Is What Makes a Family”

Even kids who don’t know exactly where babies come from understand that women are the ones who get pregnant and give birth. When that’s all you know, then the idea of two men being in love and even forming a family together just might not add up.

Again, don’t go into any more detail than you need to. Remind your kid that while it’s a woman who gives birth to a baby, your Mommy (or Mommies) and/or Daddy (or Daddies) are the one(s) who raise you. It’s no different than how you’d explain adoption by a straight couple. “The Strattons flew to Beijing and brought little Daisy home. Now they’re her Mommy and Daddy.”

What kids want to know is that the little boy or girl they see whose family looks different is still being well taken care of. Assure your children that the kids are in good hands (because love is what makes a family), and those parents love their kids as much as you love yours.

7) Most Importantly, Just Talk to Your Kids

Your kids are bound to see a gay couple sooner or later, even if it’s just Mitchell and Cameron on Modern Family. So if they come to you with questions, it’s really important that you don’t get weird about it. Don’t change the subject, don’t tell them they’re too young to understand and definitely don’t lie and say that those two ladies were only kissing to be silly or because they were rehearsing a play. Otherwise the message you’re sending is that there’s a reason to be uncomfortable around gay people. The same goes for all kinds of people, really—just explain that some people look or feel a bit different from most people we meet, and isn’t it nice that everyone’s a little different.

This leads me to a big secret: you see, there is a gay agenda. It’s true. But what most people don’t realize is that the gay agenda isn’t “everybody should be gay.” It’s “everybody should be themselves.” Be a nerd, be a Yanni fan, be a real housewife of your particular geographic region. Whatever. It’s all part of the same cause, and it’s a great message to teach your kids.

I shouldn’t have to say this in the 21st Century, but for anyone who’s still wondering: no, I don’t want to make your kids gay. I just want to live my life with a sense of mutual respect for everyone else on this planet. If you want the same thing, then let your kids learn by your example. Show them that gay people and nontraditional families are nothing to be afraid of.

I know some people think differently, but that’s what I call family values.

This article was originally featured on the author’s blog and The Good Men Project. Jerry Mahoney is a stay-home gay dad, writer, sporadic tweeter and a frequent Bowser in Mario Kart. Mahoney is also the author of Mommy Man: How I Went From Mild-Mannered Geek to Gay Superdad, which is available for purchase on Amazon.