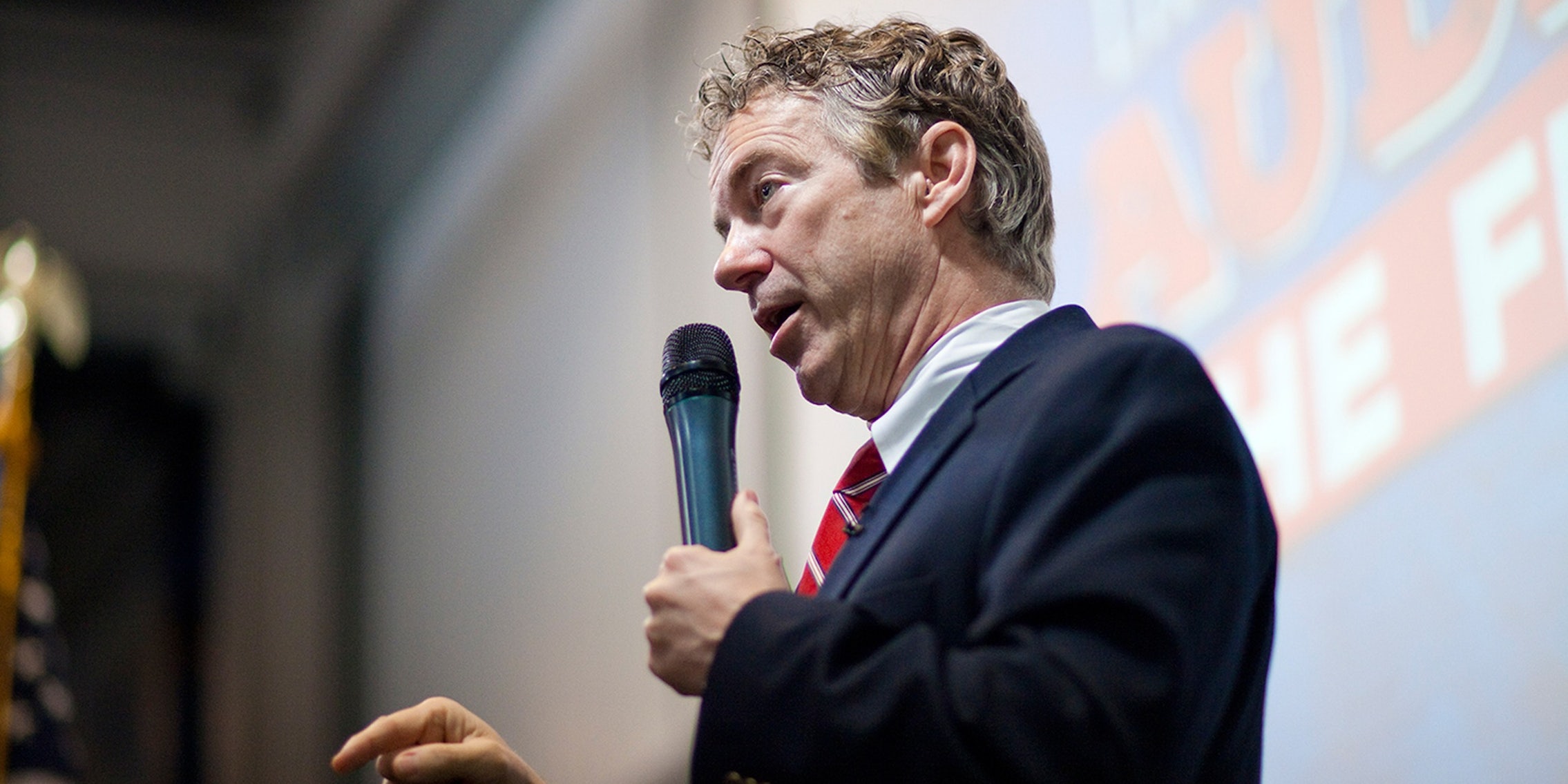 'If Rand Paul were a Democrat, Reddit would be in love.'

Earlier this week, Rand Paul became the latest presidential candidate to drop out of the crowded Republican field.

After finishing in a distant fifth place in the Iowa caucus, tallying just 4.5 percent of the vote, Paul suspended his campaign on Wednesday, thanking his followers and supporters on Twitter.

We are not trading our liberty for anything. Not now, not never. Hell no.https://t.co/J8TM92EBT2

The Kentucky senator’s poor finish in Iowa is surprising for a number of reasons. After New York billionaire Donald Trump pulled out of the Fox News-Google debate, Paul gave what was widely considered the evening’s strongest performance. Four years ago, his father, former congressman Ron Paul, who finished in a very strong third in polling with 21.5 percent of the vote, actually won the most delegates.

So what happened to Rand Paul? The answer may lie not in his GOP rivals but in a Democratic contender: Vermont Sen. Bernie Sanders.

Sanders remains the clear favorite candidate of r/Politics, the site’s nexus of election news, where he dominates headlines every single day. However, Paul’s concession announcement received a very high 5,881 points on the subreddit, with many of the comments positive and respectful. One of the most upvoted came from user a_man_without_fear: “There goes the only anti-illegal-spying candidate on the GOP side.”

It’s precisely his anti-bulk collection stance where Rand Paul found common ground with Sanders, as a well-circulated meme on the site pointed out: 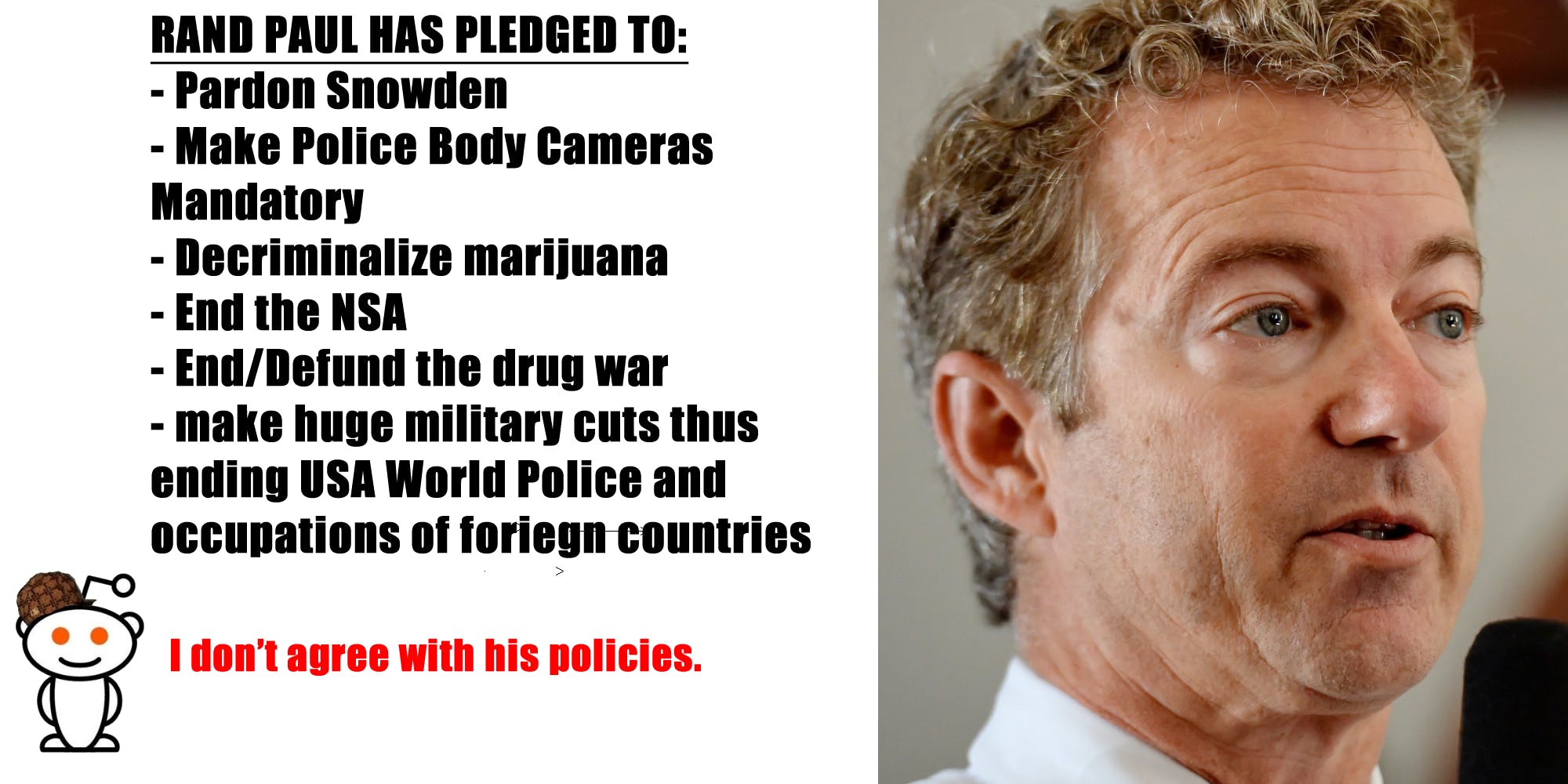 Like Sanders, Paul has been a vocal critic of the NSA’s bulk metadata program—a stance that has made the Vermont senator extremely popular with Reddit users even outside the politics hub. On the thread “If Rand Paul were a Democrat, Reddit would be in love,” a graphic points out that Sanders and Paul also agree on marijuana reform, ending the drug war, police surveillance, and cutting funding to the military.

Rand Paul, however, didn’t lack appeal on Reddit—or the wider Internet. Paul had his own subreddit that showed a vocal, if modest, base of passionate supporters, and he remains very popular on Facebook, where he commands 2.1 million followers. That’s far more than Ted Cruz (1.8 million) and Marco Rubio (1.2 million), who polled first and third in Iowa, respectively.

Instead of facing an uphill battle on a liberal-leaning Web, Paul had difficulty competing with Sanders for an audience to whom his core issues appeal—the very same digital natives who fueled his father’s campaign.

With Rand Paul now out of the running, it’s likely Bernie Sanders—not Donald Trump or Ted Cruz—who stands most to gain from his absence in the race.

“Young people, especially young men, anti-establishment voters, first-time voters, isolationists and libertarians made up the base of Ron Paul’s coalition in 2012,” writes Pat Rynard of Iowa Starting Line, a website dedicated to reporting on the Iowa caucus. “In 2016, many of those same votes are with Sanders.”

The numbers bear out Rynard’s assertion. In the 2012 Iowa Caucus, Ron Paul polled best with 18-29 year olds, first-time primary voters, the non-religious, and Independents (basically all the same groups that are likely Reddit users). Those demographics all went heavily for Bernie Sanders this time around, with a whopping 84 percent of under-30 voters supporting him in Iowa. For reference, even Barack Obama, who was widely elected because of growing millennial fervor, only managed to snag 57 percent of the “youth vote” back in 2008, when he notched a surprise victory over Hillary Clinton.

In an article for Bloomberg, David Weigel called the Sanders-Paul overlap the “protest vote”—those “who want to rebel.” Weigel spoke to Rand Paul supporters and found them very receptive to Bernie Sanders’ anti-establishment message, one they recognized from their own candidate’s speeches. “[Sanders is] probably the most honest person on the Democratic side,” one Paul voter remarked. “I don’t like a lot of what he says, but he’s a civil liberties type—even if his overall goal is to increase the amount of socialism in this country.”

With Rand Paul now out of the running, it’s likely Bernie Sanders—not Donald Trump or Ted Cruz—who stands most to gain from his absence in the race. At Cedar Rapids’ Coe College, the president of Students for Rand, Wade Hill, noted the widespread support for Sanders among his peers—and vice versa. Hill told Pat Rynard, “A lot of Bernie Sanders supporters tell me, ‘Well, if he doesn’t get the nomination, I’ll probably vote for Rand Paul.’” As the numbers show, the opposite is likely to be true.

It’s unclear if following his strong showing in Iowa, Bernie Sanders will receive much of a bump in the New Hampshire primary, which is set for next week. Ron Paul finished second in the Granite State in 2012, while Sanders is polling double-digits ahead of his rival, former Secretary of State Hillary Clinton.

But if the same group of voters who stumped for Rand Paul in Iowa begin to #FeeltheBern next week, don’t blame the medium. Blame the message.

Photo via StumpSource.org/Flickr (CC BY SA 2.0)