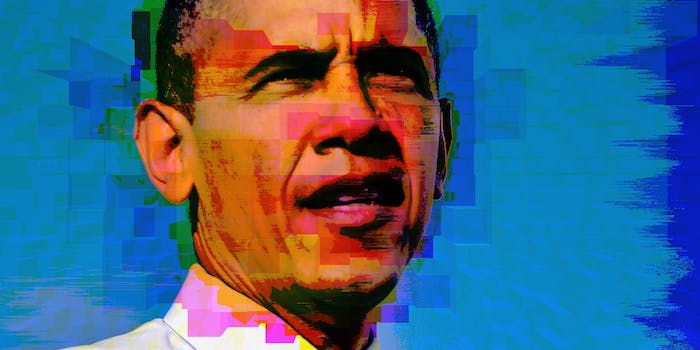 President Obama is harnessing the power of pop culture.

In the most recent episode of his hit webseries Comedians in Cars Getting Coffee, Jerry Seinfeld featured a guest who is not a professional comedian: President Barack Obama. At one point in the show, Seinfeld asked the president what was his most embarrassing moment in office so far. “This may be it,” Obama joked.

The thing is, though, that some other Hollywood figures agree with him. “A president should have a little more dignity,” comedian David Spade said in a TMZ video after Obama recently appeared on the NBC reality show, Running Wild with Bear Grylls. “I realize Woodrow Wilson went on Dancing with the Stars once. But what president is doing reality shows? It just seems weird to me.”

Yet while Obama’s critics argue that he’s demeaned his office by appearing on these shows, the fact remains that in our increasingly media-driven times, it is not only politically beneficial but often necessary for presidents to use their power of celebrity–and, quite often, do so with positive results.

Perhaps the most famous example of this was the first televised presidential debate in 1960 between John Kennedy and Richard Nixon. By being widely declared as the winner because of his more telegenic appearance, Kennedy cemented the importance of celebrity in American political culture. His erstwhile opponent took this message to heart in his own successful presidential campaign eight years later, shaking up his image as a dull stiff with an unexpected cameo on the popular sketch comedy TV program Rowan & Martin’s Laugh-In.

Before long, it became clear that Reagan’s movie career–and the motion picture business in general–had a profound effect on the president’s policies.

By 1980, the American public had grown so accustomed to blurring the lines between celebrities and politicians that it elected a former Hollywood actor, Ronald Reagan, to the White House. Before long, it became clear that Reagan’s movie career–and the motion picture business in general–had a profound effect on the president’s policies. His love of the Star Wars movies inspired the nickname for one of his signature defense programs (the Strategic Defense Initiative), as well as his tendency to refer to the Soviet Union as the “evil empire.” And many of his speeches were peppered with quotes from Dirty Harry, Back to the Future, and the Rambo movies (after seeing the latter, Reagan remarked that the next time American hostages were taken overseas, “Now I know what to do”). Indeed, Reagan’s belief that the American military should focus on preemptively thwarting hostile missiles could be traced to one of Reagan’s own film roles–the 1940 Warner Brothers movie Murder in the Air–in which the young actor played a Secret Service agent who stopped a foreign spy from stealing a similar program that would “make America invincible in war and therefore be the greatest force for peace ever invented.”

By the time Bill Clinton was wooing young voters with a saxophone solo on The Arsenio Hall Show, there was nothing particularly novel about a president immersing himself in America’s pop culture milieu. That said, while David Spade is correct in his assessment that Obama has taken this trend to another level, the president has for the most part demonstrated how the power of political celebrity can be a positive thing.

Sometimes he has used this solely for educational purposes. For example, during his appearance on Mythbusters in 2010, Obama challenged hosts Jamie Hyneman and Adam Savage to test Archimedes’ solar death ray, an alleged weapon developed by the ancient Greek scientist that used giant mirrors to reflect sunlight toward Roman ships and set them aflame (it didn’t work). In his appearance on Running Wild with Bear Grylls, Obama explored the Alaska wilderness and discussed the effects of climate change.

Even his laid-back exchange with Seinfeld contained educational moments, with Obama offering insights into the mundane details of presidential life and enlightening viewers about one of his favorite presidents, Theodore Roosevelt. “Teddy Roosevelt would go up to Yellowstone Park for like a month and nobody knew where he was and nobody could get in touch with him,” Obama explained, before wistfully adding, “Can you imagine that?”

That said, Obama’s use of celebrity has occasionally been not just informative, but historic. In 2014–back when it seemed like the Affordable Care Act was doomed to fail because not enough young people were enrolling–Obama agreed to a suggestion by actor Bradley Cooper that he appear on the online comedy series Between Two Ferns with Zach Galifianakis. Although the 6-and-a-half minute skit mostly consisted of the president exchanging barbs with his deliberately discourteous host, it also told viewers how they could enroll in Obamacare’s insurance exchanges – and was a rousing success. Not only was the skit subsequently nominated for an Emmy Award, but it garnered 33 million viewers and–along with a promotional campaign by basketball star LeBron James–helped lead to a last-minute surge in enrollment that ended with 7.1 million people signing up on federal or state exchanges.

If they use it responsibly, the nation can benefit enormously; if they use it improperly–whether by promoting ignorant ideas or deliberately cultivating prejudices–it can be a destructive force.

Of course, this doesn’t mean that there aren’t downsides to presidents behaving more and more like celebrities. The explicitly racist presidential campaign of current GOP candidate Donald Trump has been enabled by the billionaire’s celebrity status, first as a self-promoting real estate mogul in the 1980s and 1990s and then as a reality TV star in the 2000s. What’s more, the success of his presidential campaign has been fueled by his savvy manipulation of media, as Trump has shown himself adept over and over again at providing ratings-friendly entertainment with his various inflammatory comments. Just as Obama has used the platform of presidential politics to promote health care reform or educate the public on scientific matters, so too has Trump used it to fan the flames of racial bigotry.

Perhaps the lesson here, then, is that the power of celebrity should be viewed as just that–a form of power that politicians can wield as they see fit. If they use it responsibly, the nation can benefit enormously; if they use it improperly–whether by promoting ignorant ideas or deliberately cultivating prejudices–it can be a destructive force. Either way, there is little question that Obama has transformed the office of the presidency with his use of celebrity. The challenge for his successors is whether they will make this a positive or negative precedent.