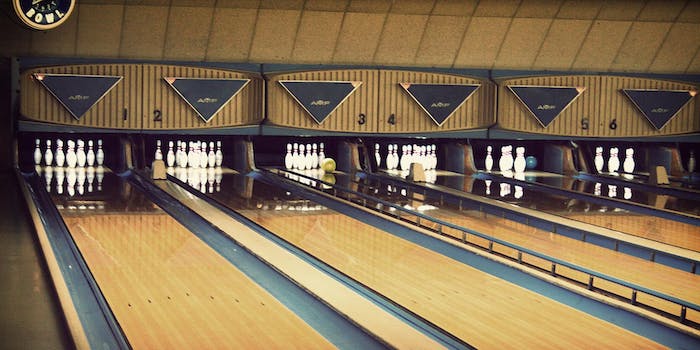 I grew up just a few blocks away from what was once the Showboat Hotel & Casino in Las Vegas, Nevada. One of the main features of the Showboat was its massive bowling alley. Added in 1953, the lanes of the Showboat were amongst the oldest bowling alleys along the PBA tour circuit, but were mostly a fun Friday night for a downtown family that couldn’t afford the gas to make its way to the then-new attractions on The Strip, such as the Stratosphere, Treasure Island, and the Luxor.

To say bowling was a large part of my childhood would be an overstatement; I never participated in any youth leagues and even now can’t bowl much better than a 130. But it was a fun, air-conditioned respite from the boiling city streets and greed-enabled exhibits mostly meant to get our parents to lose money they didn’t have. Before game consoles and apps were making solid attempts to be integrated with every part of your life, socializing in a real place around a real activity was the best way to feel alive. Plus. bowling is a rare entity: a sport that’s fun even if you aren’t much good at it.

So I do shed some metaphorical tears as bowling alleys across the country begin to die out, as Business Week reports? It does make a sort of cosmic sense: the kids less fitted for football and basketball could easily get a hand on bowling. But why bother participating in a rewardless sport—one treated more like a drinking game than a physical competition—when you can gather accolades amongst your fellow nerds, playing video games or even building them yourself?

Even as a social atmosphere, bowling alleys and other such local hangouts shy away in comparison to the nearly unlimited social possibilities of the Internet. Why bother meeting at a sporting venue—usually dank and outfitted with a bar full of depressing adults—when you can find your crush on Snapchat, Yo, and Tinder? Plus, your parents never let you go anywhere anyway. Why not just stay home?

The death of bowling alleys is about more than low-level physical activity and nachos. Physical, public spaces themselves are at risk of being felled by the enormity of what can be done in a digital space. Online gaming means you can have as much fun (if not far more) on your couch than a teenage kid ever would at a bowling alley. An Amazon Prime subscription is an agoraphobic’s dream, enabling anyone to have everything from groceries to electronics delivered to your doorstep.

Netflix and online streaming as a whole has been slaying yet another important hangout spot for those of us in flyover country: the movie theater. After Hollywood distributors set digital projection as a standard in 2012, over 1,000 local movie theaters across the country went out of business. Combine that with the dearth of quality original movies in production and the surplus of content available at home (it’s no mistake the “Golden Age” of TV syncs with a decade of nothing but sequels and reboots), not to mention soaring ticket and concession costs, what’s the point?

When Facebook purchased VR manufacturer Oculus back in March, people were perplexed by what a social network and a immersive gaming console could possibly have in common. “The incredible thing about the technology is that you feel like you’re actually present in another place with other people,” Mark Zuckerberg said of the Oculus Rift headset. “Imagine enjoying a court-side seat at a game, studying in a classroom of students and teachers all over the world or consulting with a doctor face-to-face—just by putting on goggles in your home.”

What Zuckerberg is not merely predicting but, in fact, celebrating is a world within our world, wherein all locations will eventually be replaced by digital approximations, with avatars portraying the real bodies of your friends.

Tech companies’ aim, whether they know it or not, is to remove the social factor from much of our lives, and bowling is just one of many fatalities. As our options for media and consumption grow and fracture, all of our options for how we spend our free time are competing against one another. Books, sports, bars, movies, and games are all essentially in the same market for your time.

But as home media becomes cheaper, more abundant and, yes, greater of quality, we are abandoning a former way of life. People wonder why “car culture” continues to dwindle in the U.S.—a country famous for its historic fetishization of the automobile—when the answer is simply there’s no where more interesting to drive than the place where you keep your phone chargers, Xbox, and Chromecast: home.

It’s entirely possible I’m merely being wistful for Friday nights, eating cheese fries and rolling blocks of marble at wooden pins with a family I now mostly communicate with through texting and the occasional Call of Duty match. But there are more reasons than nostalgia to hold on to such low-culture meetups as bowling alleys and movie theaters.

When we hear that vinyl records are resurging as a music format, it’s easy to chalk it up to hipsterdom or Boomer nostalgia, two forces as potent as they are self-aware. What it really stems from is a distinct nostalgia for holding something. But like a Millennial long-distance relationship, we continue to be wistful for physical aspects while embracing the digital.

Locations may soon be no different. Faster than we can say “Moore’s Law,” the digital sphere of our lives is stealing away places we will one day miss. Our children will stare at us blankly as we talk about bumpers and scorecards and how you never fully realize how heavy twelve pounds is until you have to fling it down a well-oiled wooden lane.

What we’ll be talking about—and what our parents talk about when they talk about vinyl records—is what philosophers call qualia. Defined as the subjective quality of an experience, the immeasurable sensation of being somewhere and doing something, qualia loses its uniqueness—its very subjectivity—the more we trust digital universes to recreate original, real-world settings.

And maybe that is a good thing. Maybe a world that is the same for everyone—or possibly so individualized it’s beyond sharing with others—is what we want. But if we hope to be both social creatures and remain individuals, we need to sustain our physical spaces. The more removed we are from seemingly silly experiences like bowling or going to the movies, the more we are removed from one another.