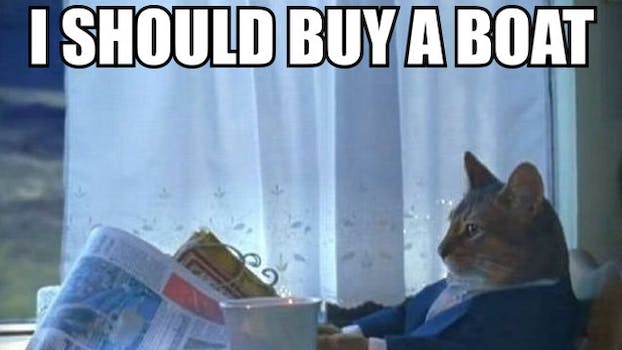 A ginger cat named Orlando made better investments than three professional and a class of secondary school students.

Britain’s The Observer has just concluded a year-long investment challenge which sought to determine if decades of experience gave seasoned stock market professionals any stock-picking advantage over a common household cat.

The result? Ha ha no.

Per the rules of the challenge, each group of participants—three professionals, a class of students from a secondary school in Hertfordshire, and a ginger cat named Orlando—were allowed to invest £5,000 in any five companies on the FTSE All-Share index.

While the professionals used their decades of investment knowledge and traditional stock-picking methods, the cat selected stocks by throwing his favourite toy mouse on a grid of numbers allocated to different companies.

Every quarter, the teams were permitted to switch stocks around if they so chose.

By the end of the third quarter, wealth manager Justin Urquhart Stewart, stockbroker Paul Kavanagh, and fund manager Andy Brough earned their clients a commendable profit of £497 versus Orlando’s £292.

However, a sudden fourth-quarter decline in the market value of the professionals’ stocks — which remained the same — compared with a sizable increase in the value of Orlando’s portfolio resulted in a stunning upset by year’s end.

It’s worth noting that, though the schoolkids’ finished the year with a net loss of £160, their fourth quarter gains were by far the strongest thanks to the property company Savills, whose stock climbed 17.4% in three months.

In other words, save your money and buy a cat.