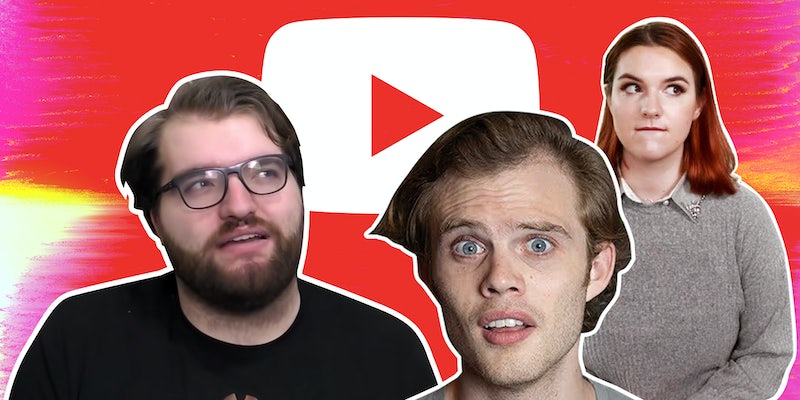 'A weird mix of intrigue and the inability to remember the source material led to this storm of people.'

Nostalgia is a hell of a drug. It can cause you to tear apart your childhood closet in search of Pokémon cards, splurge on a puffy North Face jacket on eBay, or spend hours of your life watching television shows you only vaguely recall.

As Zillennials age, a market for memories has sprung up on YouTube, with content creators creating hours-long opuses to the media we were glued to. Videos dissecting the intricate plotlines of Glee or detailing theories of a Nickelodeon-connected universe are incredibly lucrative, pulling in millions of views stemming from curiosity and an algorithmic push. This trend of two-plus-hour videos could be a bubble that can burst at any moment, but creators are going to capitalize on it while they can.

“Children’s media is something we are all connected to,” YouTuber William Thies told Passionfruit. “There are more and more people creating this content, but there will always be an audience looking for this content.”

Thies runs Billiam, a 560,000-subscriber YouTube channel dedicated to chronicling odd pieces of media and playthings from the ’90s and early aughts. In November 2021, Thies released the first of a planned three-part series on the 2004 ABC series Lost that clocked in at just under three hours. Over the course of a year, Thies wrote the script and produced the video, combing through old interviews, podcasts, and magazine websites to not only analyze the mythological lore of the series but also to piece together a complete look at what happened behind the scenes. And that’s just for part one.

His hard work paid off, with the video currently sitting at 1.3 million views, and said that it is still one of his “highest-earning videos.”

“It’s a lot more appealing to do a single video on a topic that you are really interested in and work on that for a really long time,” Thies said. “Long-form videos have a high return on individual viewers. The economy of YouTube causes longer videos to make sense because it makes your backlog more valuable.”

The evolution of the video essay

Alongside meme compilations and soap tutorials, the video essay is a pillar of YouTube content. At its inception in 2005, the site was mainly used as a place to post rehashed content from television networks and sports broadcasts, but quickly creators started to realize they could put their own face to commentary online. Comedy and video game content, popularized in part by James Rolfe’s Angry Video Game Nerd series, created the template of serving niche, highly stylized content that became the backbone of the genre.

“We are seeing this first generation of YouTube media critics form, where earlier ones focused on comedy,” Thies said of contemporary video essayists.

In 2012, YouTube’s algorithm changed how it promoted videos, prioritizing watch time over clicks. This small change allowed the video essay to take its first steps out of the Family Guy clip primordial ooze, allowing creators like Lindsay Ellis, hbomberguy, and countless others to apply proper analysis to seemingly trivial pieces of media.

The genre has since exploded, with near-forgotten fandoms and communities fueling this engine of childhood memories. The YouTube algorithm feasts on clicks and watch time, which both come in abundance from viewers watching longer content in chunks. Most viral videos tend to be on the shorter side, with platforms like TikTok, Instagram, and even YouTube Shorts encouraging viewers to endlessly scroll.

“Long video essays are successful with the audience because it’s the opposite [of where] a lot of the internet is going,” YouTuber Quinton Hoover told Passionfruit. “We are in the age of TikTok where a lot of online content is under a minute, so this content is contrasting.”

In the past, a YouTube video was considered long if it tapped out at just over an hour. Hoover, the man behind the 700,000 subscriber YouTube channel Quinton Reviews, broke the mold with a series of videos on Nickelodeon shows and stars that range from three to eight hours long. His four videos on shows iCarly and Victorious have accumulated over 14 million views with a combined run time of over 21 hours.

“I thought it was going to be as successful as my other content, I didn’t expect it to be the most successful thing I ever made,” Hoover said. “A weird mix of intrigue and the inability to remember the source material led to this storm of people.”

Hoover’s videos break down each episode of the series, discuss behind-the-scenes drama, and reflect on a generation of television populated by teeny-bopper sitcoms. To create these massive pieces of media, Hoover said that he watched over 72 hours of television episodes for both shows, online exclusive clips, and video games over the course of a year. Editing most of the videos himself over the course of many months, he said that he outsourced a small portion of the work out to editors he trusts.

“How did I stay sane? I don’t think I did,” Hoover quipped.

In an attempt to see how far a creator can push YouTube’s systems, Hoover has been experimenting with how long of a video he can upload. He claims that at 60 frames per second, he can get to about 24 hours before things start “getting weird.” That doesn’t mean he has any current plans to post a full day of new content—he admitted that getting his video to eight hours was more of a “fluke” because he kept tacking on new segments.

“The comedic long video is a bubble and I’m going to be the one that bursts it,” Hoover added. “There will be a limit one day, YouTube is full of short-term trends and they have to end eventually.”

The bubble hasn’t burst yet, and there are plenty of creators swimming in its success. Sarah Z has over 500,000 subscribers and focuses on videos dissecting the communities built around online or cultural phenomena. Sitting on her couch with a drink in hand, her videos have dissected Tumblr trends like the Johnlock conspiracy, the weirdness of Mean Girls: The Musical, and the absurdly complicated world of Homestuck.

“For some people, nostalgic topics are a way for them to revisit times that were meaningful and fun to them,” Sarah said. “For people who weren’t there, it’s a fun look into a type of nostalgia that they didn’t experience and maybe didn’t fully understand while it was around.”

When creating a video, Sarah sits down with her writing partner Lady Emily, who has her own channel, and tries to figure out what the thesis of her video is going to be. From there, they will scavenge through online message boards, forums, and the internet archive in order to get as much information as possible to create the “definitive video” on a topic, she said.

Her videos tend to skew on the shorter side of the uber-long video essay, ranging from one hour to over two, but Sarah understands why this content is appealing.

“When I reach a certain length, it’s the novelty factor,” Sarah Z. “If someone sees a 12-hour video, they are going to wonder what someone has to say for that long.”

YouTube has gone through countless trends over the course of nearly two decades, with creators consistently finding ways to cheat YouTube’s algorithm to net viewers and a profit. At any moment, the video hosting platform can choose to change how its backend algorithm works, making these video essays unprofitable to produce.

There’s also the risk that the companies that develop or distribute these old programs could strike them with a Digital Millennium Copyright Act (DMCA) claim. Though these videos arguably transform the original work and fall under fair use, companies can still use YouTube’s system to take them down using copyright strikes.

Though creators understand the risks, the popularity of these videos makes it unlikely that they’ll disappear overnight.

“Trends are always coming and going on YouTube,” Sarah Z said. “Creators [who] make these videos do so with the understanding that the popularity of certain topics is going to ebb and flow.”