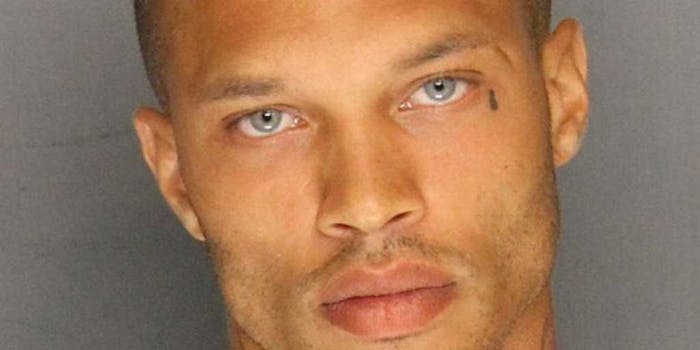 According to the Internet, your mugshot might just get you a date.

The saying goes that “crime doesn’t pay.” But according to the Internet, it might just get you a date.

This was made evident last week when the mugshot of Jeremy Meeks, a Stockton man with an arrest record, went viral. The ensuing clamour over Meeks’ good looks led to thousands of likes and shares for his mugshot, various photoshopped ads featuring him as a model, and a “Free Jeremy” campaign on Twitter.

Jeremy Meeks might be objectively good looking in the traditional sense, but the fervor over his handsome face seemingly stems at least in part from his criminal past, rather than in spite of it.

It’s a well-known reality that Americans are obsessed with crime—and in many cases even attracted to it. Pop culture reinforces this fascination, whether through the mythic outlaws of the old west or the wisecracking gangsters of the urban jungle. There’s a reason why an almost 300-pound balding man like James Gandolfini managed to become a sex symbol while playing Tony Soprano. As a country, we have been, and continue to be, utterly drawn to both manufactured and realistic ideas of the criminal lifestyle.

But what happens when the lines of the manufactured and the realistic get crossed, as they did in Meeks’ case? To be attracted to individuals with a penchant for illegal activities is one thing if it’s a fantasy, but it’s an entirely different thing to act on it.

The first step to understanding America’s love affair with crime, is to realize that we don’t feel nearly the same way about female lawbreakers that we do about male ones. One person who knows this is Gillian Flynn, author of the hit book and upcoming David Fincher film Gone Girl. Flynn has not been coy about her desire (mild spoiler alert) to write malicious women. Amy Dunne, the female protagonist of Gone Girl, has been heralded for being a complex female sociopath. As Flynn told Time Out Chicago, her reason for creating the character came out of society’s unwillingness to recognize the darker qualities in women.

Women are just as violently minded as men are, but with men it’s taken for granted. It’s something to be gotten out of the system or something to be put up with or dealt with, whereas women, it’s still considered this very surprising thing. And that’s because of this, to me, constantly enraging notion that women are supposed to be natural nurturers, we’re naturally good… I shouldn’t say specifically violence. I mean anger; I mean the darker emotions. The fact that it’s kept in check is a very good thing. But if women are considered innately good, then it robs us of any sort of will for that. I try very hard to be a good person… I want credit for that. I don’t want people to say, ‘Oh, it’s just because she’s a woman.’ That simplifies women quite a bit.

Flynn has also been adamant that her characters purposefully differ from the kind of female villains one usually sees in pop culture. “I don’t write psycho bitches,” she asserted. “The psycho bitch is just crazy, she has no motive, she’s a dismissible person because of her psycho bitchiness. And, to me, the whole point is to write scary women who aren’t dismissible, who are frightening and calculating. but you know the reason why. You know Amy’s back story. And, to me, she’s sympathetic. I mean, I wouldn’t go on a road trip with her or anything.”

In response to Gone Girl’s Amy Dunne and other similar characters that have popped up recently, Digg’s Merve Emre wrote about the rise of the female sociopath in pop culture. The problem, Emre suggests, is that our newfound obsession with female sociopaths is an outgrowth of America’s persistence in ghettoizing women in general. By fawning over female sociopaths, simply because they are female, we’re still separating them from men and, therefore, excluding them from larger conversations about deviant behavior in America.

As Emre puts it, “When we accept as ‘revolutionary’ the well-worn conditions that dictate how a man is allowed to be, and how a woman ought to change to match his success, there is no progress. Strong though she may be, even the female sociopath can be pulled back into the same old structures of sexism.”

Furthermore, Emre claims we like the idea of female sociopaths because, in theory, they have no interest in issues like sexism. “The female sociopath doesn’t want to upend systems of gender inequality, that vast and irreducible constellation of institutions and beliefs that lead successful women like Gillian Flynn to decree that certain women, who feel or behave in certain ways, are dismissible,’” Emre argues.

Instead, she looks at the rise of the female sociopath in the American consciousness as being related to much more stereotypical ideas about what it means to be a women. From her perspective, “Part of the representational appeal of a female sociopath like Amy Dunne invariably comes from her relationship to a more recognizable female identity—the female as victim.” She continues, “The message is maddeningly consistent. When women are being marginalized or exploited—which they always are—the responsibility rests partially, maybe entirely on their trembling little shoulders.”

Ultimately, Emre sees the female sociopath as a response to the fetishization of women as weak, helpless creatures. But by making them a response, rather than a distinct group all on their own, we’re fetishizing female sociopaths, too. Either way, the motif comes out of the idea that women are fragile and delicate.

This is why we aren’t interested in female criminals the way we’re interested in male ones. In television, movies, and books, we relish the archetypes of the femme fatale, the psycho bitch, and the sociopath—but we don’t like to think of women as everyday, ordinary, common criminals. Because to do that would be to suggest that women aren’t always innately frail. That’s why people find a show like Orange Is the New Black so uncomfortable —but also why the show is so vital. Suffice it to say, if Tony Soprano were a woman, she probably wouldn’t be looked at in the same way.

Tony Soprano notwithstanding, however, classically good looks are more often than not a part of what makes a criminal considered “attractive,” as is the case for most people. Keep in mind that Meeks isn’t the first Internet phenomenon that is indicative of this; there was another “attractive convict” meme that preceded him.

In reaction to Meeks’ fandom, Judd Legum at ThinkProgress pointed out that “a 1975 study found ‘unless they have used their attractiveness to commit a crime (for example, a swindle), good-looking people are likely to receive highly favorable treatment in the legal system.’ For participants in the study, ‘When the crime was unrelated to attractiveness (burglary), subjects would assign more lenient sentences to the attractive defendant than to the unattractive defendant.’ A more recent U.K. study found ‘attractive suspects were more likely to be acquitted, despite there being no extra evidence in their favor.’”

The complication that arises when discussing the attractiveness of real criminals, especially male ones, is that their physical features are often used as an excuse to justify their behavior. Sexiness almost always bestows privilege, but depending on the nature of a given criminal’s offenses, that privilege can be borderline dangerous.

As Salon’s Mary Elizabeth Williams argues, “Sure, there’s something inherently laughable about a man a colleague described on Friday as ‘preposterously handsome’ and a photograph that might otherwise be right at home in a Dolce & Gabbana ad campaign appearing instead on a mug shot… But when you’re finished fanning yourselves, all, just note that Stockton Police Officer Joseph Silva told the AP this week he’s also ‘one of the most violent criminals in the Stockton area.’”

Overlooking Meeks’ supposed violent behavior in favor of his handsomeness isn’t even close to the most disturbing instances of willful blindness in the face of attractive criminals. Parts of the Internet missed the boat completely when they decided to focus on how boyishly cute women-hating, mass shooter Elliot Rodger and sociopathic killer T.J. Lane were.

And if you go farther back than that, you’ll find that serial murderer Ted Bundy had a following among women who were essentially his groupies. Unlike being a fan of television’s Dexter, whose redeemability came from the convenient twist that he only killed “bad guys,” being a fan of Bundy meant being a fan of a person who was accused and eventually convicted of violently assaulting, beating, and slaughtering over 30 women.

Returning to the realm of the fictional for a moment, Branwyn Lancourt of The Faster Times penned a piece not long ago wondering if there was some kind of sad revelation underneath the attraction to monstrous men in pop culture. He writes, “On The Sopranos, the audience is bombarded by scene after scene involving physical and mental abuse, adultery, and active disrespect, and yet, millions of female fans are far more intrigued by it all than they are repulsed. Yes, it isn’t real, but is there some sort of universal truth lurking at the heart of it?”

Lancourt’s curiosity isn’t unreasonable, but his questions about whether women are attracted to misogyny are pretty off base. The truth is that people are attracted to violent men because of toxic ideas about masculinity. The belief that the height of desirability is always the strong, powerful, alpha male seeps into our collective curiosity about the criminal element. Sure, a man might be a brutal criminal, but at least he can take charge of something—at least he’s a “real man.”

All of that said, it’s best to take the conversation about Jeremy Meeks and other attractive criminals with a grain of salt. Just because someone is a criminal doesn’t mean they’re automatically a bad person, whether they’re attractive or not. And having fantasies should be okay for anyone. There’s a big difference between casually indulging in Bonnie & Clyde daydreams, where violence is a turn-on, and actually taking the mentality behind those dreams to heart. As Red pointed out in the latest season of Orange Is the New Black, danger can be sexy.

But it’s still smart to remember that danger can also be dangerous.