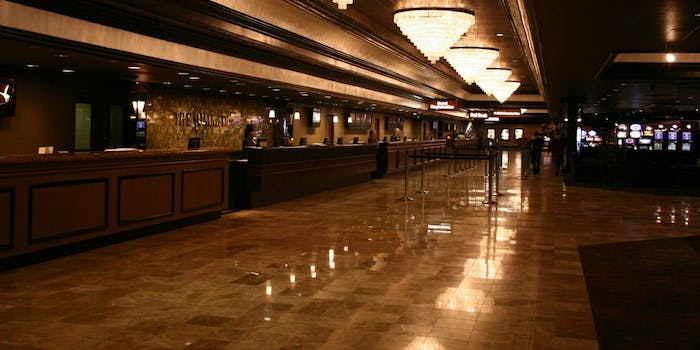 Internet wonders whether hotel patron was checking in without pants on

It's the next great debate.

After a long flight and a bumpy taxi ride to the hotel, there’s nothing we want to do more than strip out of our travel clothes and indulge in a little bit of naked time in the unfamiliar a welcoming room where thousands before us have disrobed and engaged in activities you’re better off not pondering.

Most of us, though, wait until after we’ve checked in before yanking off our pants.

Submitted for your approval and analysis: this post on a Facebook‘s “Passenger Shaming”—a page that exists to highlight egregious travel faux pas—in which an attentive hotel patron has snapped a picture of a fellow guest who doesn’t, um, appear to be wearing anything below the waist.

A closeup? Sure, I can provide. Maybe NSFW? Hard to say! The most obvious explanation here is that this person—and keep in mind we don’t know their gender—is wearing flesh-colored leggings. But if you look close (and boy, have I, in the name of journalism), it appears there are tiny hairs on the person’s legs. That, of course, could also just be the light or the blurriness of the photo.

Then again, if the person really was bottomless, wouldn’t his/her crack be more visible? Instead, it sort of appears as though the person is wearing pantyhose without anything on top of it.

Either way, let’s look at this from a scientific point of view and throw out some theories:

1) The customer is not checking in.

Rather, they have just returned from the pool, and they’ve stopped at the front desk to request extra towels for their room. Their dress shirt doubles as their cover-up. And they’re wearing a thong, so they’re probably European or something. Debunker: So why is their suitcase right there next to them?

Which is why the front-desk clerk doesn’t appear to be surprised and/or troubled by the scenario. Debunker: According to the American Association for Nude Recreation,”the benefits of nude recreation are based on acceptance of self and respecting the individuality and freedom of others.” This bit of nudity doesn’t seem to respect the freedom of others not to see this person naked. Besides, I don’t even know if nudists have their conventions in conventional hotels.

Jesus, you’re right. Enough already. Debunker: But there’s no way they’re smooshing their junk against that little counter built into the front desk. I mean, who would do that?

He or she is wearing pants. Unflattering pants, perhaps. Pants that elicit a triple-take from every passerby. But pants for sure. The railing blocks the cuff on his/her right leg, and the suitcase blocks the same on the left. They’re pants, pants, pants.

And that’s a woman wearing them. I’m 50 percent sure. Perhaps, in the future, he or she could wear something less controversial. Perhaps a nice dress.