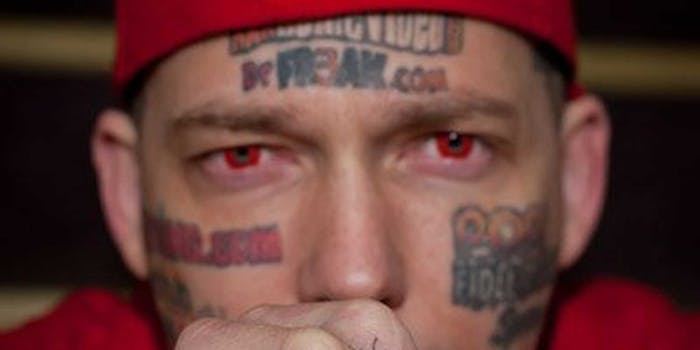 Hostgator Dotcom sold ad space on his face. Now, one of his clients is paying to have the tattoos removed.

“They advertised on my face a long time ago, read the Vice story, and decided they wanted to help me—they’re just doing it to be nice,” Hostgator Dotcom told the publication. “I had my first laser removal treatment last week.”

This is definitely a wonderful resolution for the Anchorage, Alaska, native, who raised $50,000 by selling advertising space on his body more than a decade ago. But if you think Hostgator Dotcom is done with crazy money-making antics, you’re most definitely wrong.

Dotcom told Vice that he’s thinking of selling ads to be placed on his casket once he dies, something he hopes doesn’t happen any time soon.

He’s also entertaining the idea of going back to basics, of using his body as an advertisement board. This time around, it’s his manhood that he’s willing to tattoo if the money’s right, contradicting his previous stance on the matter.

He didn’t say how much he would do it for, but Dotcom noted that “it would have to be quite a bit” because “that’s a good 12 inches of advertisement space.”

This is most certainly a curious and novel idea, but it’s most almost assuredly doomed to fail. The thing that makes advertisements successful is their visibility. Unless Dotcom plans to walk around with his junk hanging out, no one will be getting the most bang for their buck.