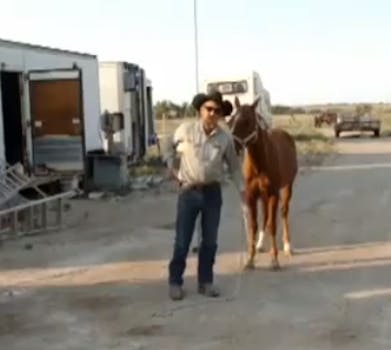 Animal activists across the United States are up in arms this morning after a video showing an employee at the Valley Meat Company in Roswell, N.M., shooting a horse in the head was posted onto YouTube.

Animal activists across the United States are up in arms this morning after a video showing an employee at the Valley Meat Company in Roswell, N.M., shooting a horse in the head was posted onto YouTube.

The video, which allegedly shows Tim Sappington, a maintenance contractor at Valley Meat, pulling a pistol out of his gun holster and shooting what appears to be a perfectly healthy horse in the head.

Just before he shoots, he issues a rude message to those watching.

“To all you animal activists, f*ck you,” he says, then pulls the trigger on the pistol.

The video has brought the ire of animal activists and sympathizers throughout the country. According to New Mexico’s KOB the Valley Meat Company has received a litany of phone calls and hate letters, all of which have slammed the company for employing such a crude individual.

Part-owner Rick De Los Santos has denied any involvement in the act.

“I didn’t have anything to do with that video, that’s the honest truth,” he told KOB. “But like I said, people will make assumptions.”

He added that Sappington shot the video on his own time and property. The FBI is reportedly looking into the shooting.

Earlier this week, Bloomberg reported that Sappington is an avid fan of horse meat who’s “eaten it for years” and keeps a meat locker stocked at his home.

“Anything we’ve ever made with meat, we’ve made with horse,” he said.

UPDATE: Bloomberg reports that Sappington has been fired from his job at Valley Meat Company for his role in the horse slaughter video.

“It’s extreme cruelty, a penalty, to maliciously kill an animal,” Bobby Pierce, the deputy director of the New Mexico Livestock Board, said in a statement. He added that charges will likely result from the investigation.

Sappington maintains that he killed the horse “for my personal consumption.” Earlier today, Pierce verified that it is legal to kill livestock for food.