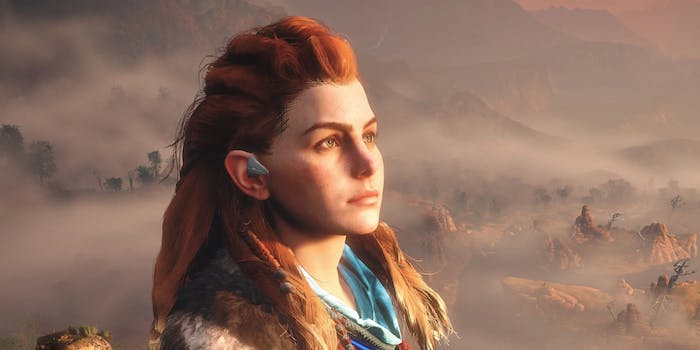 Everyone is making fun of this sexist ‘Horizon Forbidden West’ fanart

Apparently the heroine of this upcoming Playstation game looks too 'masculine'? Sure.

If a female character doesn’t look like a Barbie doll, a certain cadre of male gamers will lose their minds. The latest example of this phenomenon emerged this weekend, reacting to new footage from Horizon Forbidden West, the upcoming sequel to 2017s’ Horizon Zero Dawn.

This open-world fantasy game takes place in post-apocalyptic America, starring a huntress named Aloy. She’s a young red-haired woman with a vaguely Native American-inspired aesthetic, but while the game has already been accused of cultural appropriation, that isn’t what we’re talking about today. No, apparently some people are mad that Aloy isn’t feminine enough, as evidenced by this viral tweet:

The tweet compares a frowning image of Aloy with some fanart where she has Facetune-perfect skin, gleaming white teeth, and a full face of makeup. It quickly grabbed people’s attention because it’s such an absurd example of sexist video game complaints. It’s also a sadly obvious case of Twitter amplifying the worst possible opinions because while there’s definitely some controversy over Aloy’s appearance (she visibly aged between games), there isn’t a widespread backlash.

A lot of gamers—particularly women—are sick of seeing this kind of criticism aimed at female characters. But at the same time, sexist complaints like this tweet can be morbidly hilarious. It highlights the childish, unreasonable, and ignorant underpinnings of misogynist gamer culture, which is part of the reason why it went viral in the first place. This guy is complaining that a slim woman with styled hair and shaped eyebrows isn’t “feminine enough,” essentially because she’s not wearing makeup and smiling like a beauty queen. Absurd.

The phrase “hire fans” from the original tweet turned into a meme in which people shared other side-by-side images of characters from pop culture: the left image showed the real character, the right image showed a prettified version of them.

The original tweet also referenced The Last of Us Part II, which did face a concerted backlash around the design of its female characters. In particular, the character Abby was criticized for being too muscular, resulting in a harassment campaign against the game’s designer and Abby’s voice actress. Some male fans just can’t handle the idea of a female character who isn’t overtly sexualized, regardless of context.

When this kind of criticism reaches a mainstream audience, it often inspires the same mocking response: Have these guys ever seen a real woman? Well, the unfunny answer is yes. There isn’t some secret community of gamer men who live in vacuum-sealed rooms, consuming an exclusive diet of Rihanna videos and Tomb Raider 4 gameplay footage. They do know what real women look like. They have female relatives and coworkers, and they go to the grocery store like everyone else. They just can’t stand the idea of video games catering to a wider audience. The point of these complaints is to push back the Overton Window of games criticism, promoting a false idea of what female characters “should” look like.