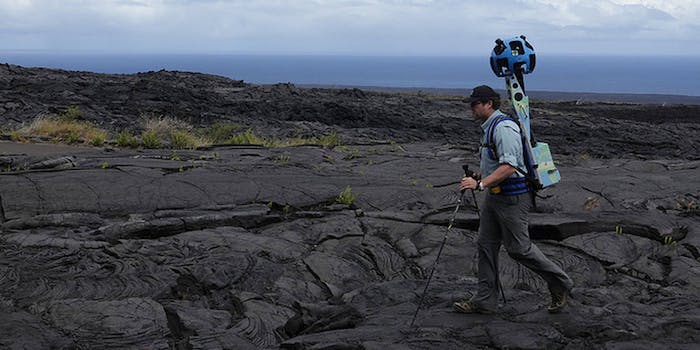 Forget the NSA, with Google’s new Street View Trekker we can spy on ourselves

We don't need the NSA to surveill us—we'll soon all be doing it to each other. Willingly.

Access is the most radical aspect of the Web.

Access by the uncredentialed—bypassing the gatekeepers and flattening the hierarchies of information—is bracing. Like punk rock, it unleashes plenty of garbage, yes; but it also allows those with the mind for it, who only needed information previously locked away, the freedom to change things. All it takes is the simple addition of that little bit of access.

So on the one hand, digitizing archives, making communications between people cheap and fast, and, yes, even Google’s Street View tool are all wonderful things. Street View’s most interesting aspects are those which allow users to enter museums remotely and to visit extraordinary, difficult-to-access parts of the world, like the Grand Canyon—even realms of the imagination such as the fictional Diagon Alley.

On the other hand, Street View has also created a great deal of controversy for its intrusiveness.

So its latest pilot program, the “Google Map Trekker,” is cool in many ways. It’s a pilot program that allows third parties to contribute to Street View Trekker and Google Maps:

For the first time ever, this program will enable organizations to use our camera equipment to collect 360-degree photos of the places they know best — helping us make Google Maps more comprehensive and useful for all. This program is part of our ongoing effort to make it possible for anyone to contribute to Google Maps.

However, given the profound unease that the revelations about the National Security Agency’s surveillance programs have engendered, Google Map Trekker is also troubling. Now we don’t need the NSA to watch our online movements; we’ve got our friends, neighbors and strangers tracking and documenting for Google.

If we have found ourselves (and many have) fed up with the pervasiveness and sneakiness of intelligence agencies, and the high-handedness of multinationals, why on earth would we so enthusiastically document our own movements—and, of course, the stray thoughts of ourselves and our friends and family, as we so obviously do? But we do. With zeal.

Now Google is offering us (via our civic organizations, academies, tourism boards and any other “third parties”) the opportunities to record not metadata for companies to market to us in a manner most intrusive and for governments to track our movements, but actual bona fide high-def, imagery mapped to a sophisticated geolocational software.

Not to mention the fact that with worries over terrorism leading to shoeless airport lines, is the intimate tracking of every square inch of America by amateurs really such a great idea?

Sure, getting 360-degree views of Hawai’i is, on one level, sincerely wonderful. (The Hawaii Visitor and Convention Bureau has become the first organization to take part.) A couple of months ago, the idea that some folks strolling around Hawai’i could be a harbinger of doom would have been the tale of a wingnut. Now, however, in the wake of PRISM, it triggers a fight or flight sensation in even the most satisfied onlookers. It’s probably still a ridiculous worry, but who feels safe discounting it out of hand?

All of these concerns, as grave as they are, say nothing of what we might also be losing in a metaphysical sense. Wordsworth wrote in his odes, Intimations of Immortality,

There was a time when meadow, grove, and stream,

The earth, and every common sight,

To me did seem

The glory and the freshness of a dream.

Where is that “glory and freshness” when we’ve seen every meadow, grove and stream before? Do we want to photograph and map every place we could ever hope to stand before and gaze on in a moment of awe? In the flush of enthusiasm at what technology can do, will we lose the discoverable wonder in the world—the wonder that stays put when we power down?