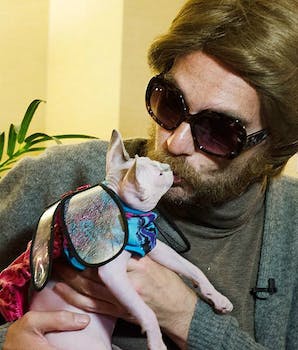 Honey badger don’t care: How Randall became the voice of a nation

The man behind the viral “The Crazy Nastyass Honey Badger” video says he wants to hit the “reboot button” for his country.

In the past week alone, Randall was “on the prowl” at the New York City Cat Fashion Show for PawNation; appeared on Bravo’s Watch What Happens Live with Andy Cohen; narrated over celebrity judges Sharon Osbourne, Howard Stern, and Howie Mandel in a mock documentary on America’s Got Talent; and recorded a voiceover for Far Cry 3. When I finally got a hold of him, he apologized profusely for his busy schedule.

“Since the video’s come out what I’ve found is that I’m this new voice for the animals, which means the world to me because ever since I was a child I’ve always adored and loved animals,” Randall, known as the Cher of the wildlife kingdom,” told the Daily Dot. “In a nutshell, all I’m trying to do is really utilize YouTube as a platform for me to speak on behalf of animals and wildlife that don’t get enough attention.”

“The Crazy Nastyass Honey Badger,” Randall’s hilarious narration of a National Geographic video on honey badgers, was recorded late one night at longtime friend Christopher Gordon’s house. The video, which debuted on YouTube in Jan. 2011, has since been watched over 49 million times, resulting in a book deal and a television show. Glee even gave a shoutout to “nature’s most ferocious animal” in its second season.

Randall’s lent his voice for a Wonderful Pistachios commercial last year and has recorded voiceovers for other wildlife on Gordon’s YouTube channel, such as the Great White Sea-Monster, the American Bullfrog and goats. (Randall doesn’t have his own official channel and all content goes there.)

But none of his videos caught on quite as much as his commentary on the honey badger, whose tremendous popularity he credits in part to its timing.

“If you look at the present state of our society and our country in general—and perhaps even the world—you’ll notice that people are getting sick and tired of dealing with things they don’t necessarily want to (nor should) have to deal with,” Randall noted.

“It’s the honey badger’s mentality: I don’t care. I’m going to take what I want because I’ve had enough. You know, when you think about it, we’ve just endured—prior to President Obama—eight years where a former President’s son, who was basically a puppet if you ask me, who was pushing issues who had nothing to do with us in the end. We’ve lost so much of the nation. Because for once, not only can people relate to an animal, they’ve adopted that mentality.

It’s certainly not the first time that he has taken a political tone. He writes for the Huffington Post and has taken on Rupert Murdoch, polygamist leader Warren Jeffs, animated rocker girl Jem, the Rick Perry commercial that enraged the Internet, and even started the Honey Badger Party.

In fact, Randall, who recently did work with Greenpeace, will make an appearance at the Republican National Convention next week to promote alternative solutions to drilling for oil in the Arctic, such as reusing waste as a natural resource.

“Let’s hit the reboot button and start new and really figure out what’s going on in our country and how to spend our money,” Randall said.

YouTube has evolved tremendously since Randall told us the “honey badger don’t give a shit.” Anything can go viral these days, from Tay Zonday’s “Chocolate Rain” to a how-to tutorial by a 3-year-old, but for Randall, such videos all have one thing.

“As long as it comes from the heart and you’re genuine, you’re gonna get the exposure you deserve,” he observed. “However, when you get trapped in the web of ‘How can I make money off of this?’ is when you you lose it.

“And that’s all I’m trying to do. I’m passionate about animals; I want to share my love for and knowledge of animals with people. And all I can say is thank goodness for YouTube because it gives people who are passionate—people who take pride in what they promote a platform to express their voice without thinking about how they’re going to be judged.”

Maybe Randall’s not so different from the honey badger after all.