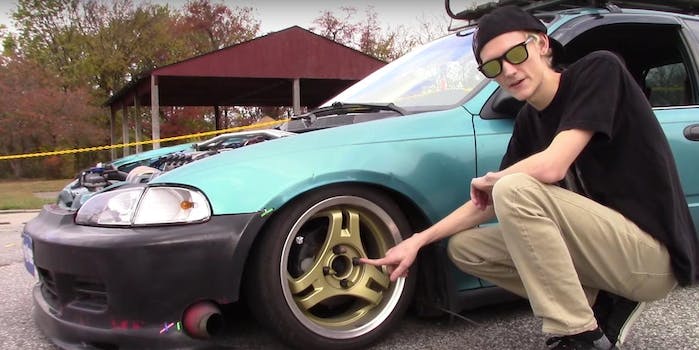 screengrab via Muscle Vs Tuner/youtube

Is this guy for real?

As a guy who uses a Honda Civic to haul groceries, I had no idea I was completely wasting its potential. It turns out that Civics are commonly modified for street racing, as they are relatively cheap, and the parts are readily available.

There are literally thousands of videos of dudes showing off their custom built Civics and racing them against Mustangs and other traditional muscle cars. A little research also reveals that these guys are among the most hated groups of people on the Internet, falling somewhere between people who use comic sans and the guy who shot that lion.

Enter “Robert Lovely,” a man who, despite all evidence to the contrary, I achingly wanted to be real.

“Sure,” I thought, “This video is called ‘Shit Civic Owners Say’ but maybe he’s just owning it.”

“OK,” I told myself, “those lugnuts probably can’t actually shoot off to pop someone’s tire, but it’s not like I know anything about cars…”

Then, with a straight face, the dude he announces that his steering wheel is made of mahogany infused with unicorn dust.  Damn it, Robert, you’ve jumped the shark. If you need any more proof of his trollish ways, here he is showing off his “souped-up” Mitsubishi Lancer.

Screengrab via Muscle Vs Tuner/youtube