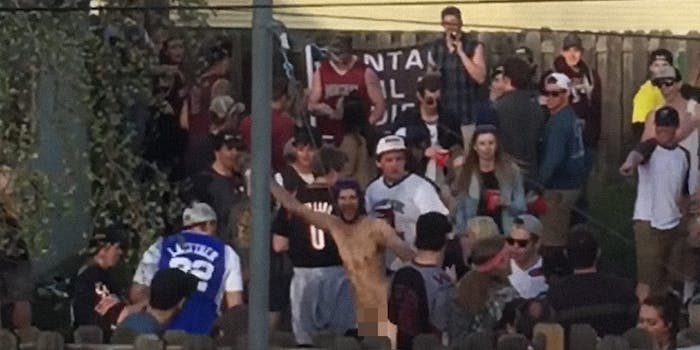 There’s really nothing funnier than a flaccid penis, just flopping in the breeze like a forgotten sock on a clothesline. It’s like God waited until the last minute to put genitals on men, then just threw something on their crouch on the way down to Earth. It’s twice as funny if the owner of said penis is running. His wanger bouncing and twirling like the single blade of a little pink helicopter. That’s way, despite all the many public indecency laws in place, people continue to go streaking.

Just streaking by itself isn’t that notable, but there’s something about “Homie Dave” that just seems to stand out.

Warning: You can kinda sorta almost see Dave’s dick in this video. Which is Not Safe for Work.

Really it’s not so much HomieD that makes this great. It’s the whole, for lack of a better word, package, starting with the title. “Homie Dave Streaks Through a Banger.” It’s like these guys didn’t even wait to stop being buzzed before posting this video. People needed to see Dave’s bouncy dick now!

Then there’s the fact that, even those these guys are messing with a fraternity, they could not seem more like frat bros if they were taking a class. Everything in this video is described “lit” or “savage” by dudes pounding PBRs.

Also, the guy who posted the video is named Ryan Sully, and I’ll pack the next bowl if his friends have ever called him anything but Sully or, when he first walks into the room, “Sullyyyyyyyyy!”

Speaking of our video’s director, YouTube is very unhappy with his cinematography choices.

Perhaps the video’s greatest moment comes when the camera, and presumably all the boys, are facing away from the action trying to find their friend, who they just sent to go streaking through the party behind them. We, as the audience, hear the party react before these clowns eventually turn around.

Sullyyyyyyyyy! redeems himself slightly as a director by somehow having the mind-blowing special effect of Homie Dave being clearly naked here:

But somehow having his pants back on here:

Party on Homie Dave. You are a true hero. At least to a bunch of drunk dudes on a roof.