This is what happens when well-off people attack the poor.

In a recent report at AlterNet, Tana Ganeva outlines what one predominantly wealthy New York City neighborhood’s residents think about its homeless population—and they’re sharing it all on Facebook. Unfortunately, the innermost thoughts and feelings of some members of the New York elite aren’t as beautiful as the gated communities where they live.

“Just be thankful you don’t live in the Future condo,” one group member writes. “I pay $20K in property taxes to have disgusting homeless people all over our public courtyard around our kids. And God forbid you personally say or do something then you are labeled a racist or prejudice [sic].” In another post, one community member shared a photo of a man passed out on the sidewalk, quipping, “Enjoying the finer things in life—covering yourself in feces and taking a Sunday siesta.”

The fun and games go on and on for these affluent residents. One even had advice for others concerned about people experiencing homelessness in their neighborhood: “Just to remind everyone. It is really important that we never give money to any vagrant, it is just like feeding a stray dog, if they get some scraps, they will keep coming back.” And to make matters worse, one resident even suggested calling the police on a man with a cart full of belongings, which included a stuffed toy—to falsely report he’s soliciting children: “It’s time to take this up a level and get these guys out.”

The group in question, Third and 33rd (and Beyond!), describes itself as “A group forum to help improve our neighborhood and share pictures—time and date stamped—along with incidents that related to public safety and quality of life.” The group Third & 33rd, its public counterpart, was set up to “To improve the Kips Bay, Murray Hill, Rose Hill & Gramercy Park neighborhood” under similar auspices.

But while they claim to operate in the public interest, what the majority of the group members are actually doing is participating in the mockery and shaming of homeless people. Their expressions of disgust and loathing are not only unnecessary, but also unhelpful. In a country where housing “remains unaffordable for a large swath of the American public,” the targets truly worthy of shame are predatory landlords and unfair legislation.

According to a recent study released by Economic Roundtable, there are 13,000 people forced into the street each monthin Los Angeles County alone. The reason? Housing costs.

Deeply subsidized housing is needed to enable jobless individuals to avoid homelessness. However, HUD funding for the Section 8 Housing Choice Voucher Program, the primary resource for making rental housing affordable to low and very-low income households, has declined since 2010. The wait for vouchers is now longer than ten years. Chronically homeless individuals with acute disabilities are given priority access to Section 8 vouchers, but this still leaves the majority of currently and formerly homeless individuals with very long waits for affordable housing. We estimate that only one in ten individuals in this segment of the population touched by homelessness is able to obtain a Section 8 voucher.

Back in New York, many of the members of Third and 33rd (and Beyond!) use the group to direct their blame towards New York City Mayor Bill de Blasio:

“Dinkins dayzzz are here again. DUH-blah-zio ruining everything that Giuliani and Bloomberg did. Who elected him???” one group member posts in a thread. The first poster recently returned to the group to voice his opinions, writing that “If these ‘people’ are aggressive toward me or my wife or my family I will NOT hesitate to knock them out! But then I would be called prejudice or racist. Sad state of affairs under or Pres and Mayor. #TRUMP”

But here’s something these residents unfortunately don’t understand: Homeless advocates agree that billionaire businessman and former mayor Michael Bloomberg is actually the person most deserving of blame for the high rates of homelessness in New York City. As Ganeva points out, “In 2012, when the mayor famously said no one was sleeping on the streets, there were more than 3,200 people sleeping on the streets according to city data (probably a huge underestimate because the count takes place during the winter when fewer people are outside).” 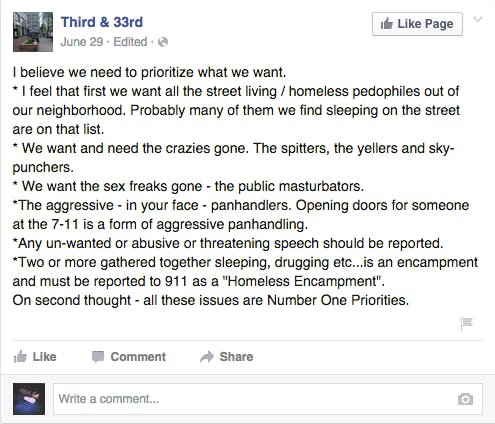 If concerned members of these Facebook groups actually want to get “all the street living / homeless pedophiles,” “spitters, the yellers and sky-punchers,” and “sex freaks” out of their neighborhoods, as the post above alleges, what they first need to understand is that homelessness in the United States is a complex issue. With unfair in housing practices and a history of discrimination against the poor, it’s even more difficult for people who are homeless to get the assistance they need.

For years, landlords have been discriminating against their tenants by raising prices at inordinate amounts since the early 19th century. As explained by Thomas Angotti, director of the Hunter College Center for Community Planning and Development, price-outs prompted workers to unionize so they could afford higher rent. But ultimately, state legislation attempted to placate both sides by implementing rent regulation in New York, which limited landlords’ ability to raise rent prices as they wished.

Since rent regulation was introduced, however, Angotti estimates that around 200,000 rent-controlled units have been lost, as the real estate industry was successful in implementing a rent limit that was, until recently, $2,000. If a landlord was able to raise the rent to that amount or higher, he explains, the unit’s rent was no longer regulated—and landlords could charge whatever price the market could bear. That amount currently sits at a whopping $2,500.

Tenants’ rights lawyer John Gorman explains: “That has a profound impact on this regulatory system, because it opened up or compelled owners to engage in a lot of deception and fraud. The fraud would occur when owners were faced with the dilemma of how to get this rent to the threshold, the $2,000 threshold.”

What homeless people are really asking for—what they need—is legislation that prevents predatory landlords from unfairly taking advantage of tenants.

So those units were lost because tenants, subjected to deception and fraud, simply gave up trying to find affordable housing in the city and left, unaware of their civil rights. Instead, they moved to locations outside of the city for lower rent, and paid high prices to commute in and out of the city, all while work minimum-wage jobs. Commuting is expensive, and difficult to do even on minimum wage. Yet a harmful, classist paradox still persists, with higher rates of homelessness and high-priced apartments going uninhabited.

New websites like Am I Rent Stabilized are helpful for tenants to determine their rights, but the majority of tenants still remain in the dark. Meanwhile, the people who end up out on the streets, down on their luck and without any institutional or governmental support, still get judged by the affluent for a circumstance that’s typically out of their control.

As it relates to the affluent tenants of properties near Third and 33rd, many of them still understand why shaming people who are homeless does more harm than social good. And in many cases, the media doesn’t help matters either. For example, as Ganeva writes, the New York Post, “set the public-shaming-of-street-people bar high earlier in the summer, sending more than 16 reporters to follow one homeless man on the Upper West Side, as Gawker reported. The results of that deep-dive investigation was a picture of the man plastered on the cover and headlined, ‘20 Years of Cleaning Up New York City: Pissed Away.’”

And while some online communities of affluent people betray an interest in the quality of life for their fellow residents, the commentary would benefit from an approach that moves from shaming to empathy and support. All of the vitriol—including the commentary and photos—could be reframed and channeled to potentially assist those who need help. For example, an app called WeShelter does not allow users to post photos, and it connects to 311 for non-emergency cases where homeless people may benefit from assistance.

The wealthy may turn up their noses, deeming their homeless peers “lazy” or “asking for a handout.” But what homeless people are really asking for—what they need—is legislation that prevents predatory landlords from unfairly taking advantage of tenants.