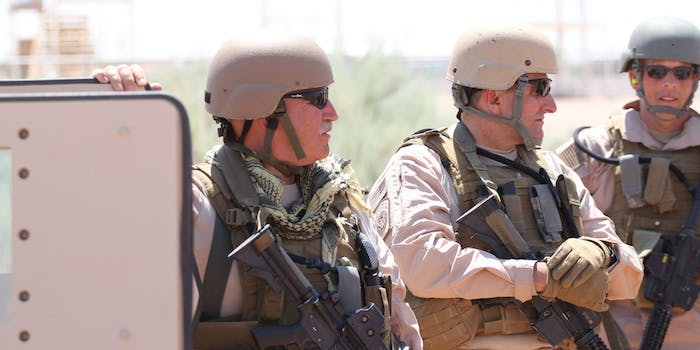 The department says warrantless searches of electronic devices are essential, despite protests from Fourth Amendment advocates.

American border agents can look in your laptop, tablet and other electronic data device, without “probable cause,” without explaining why they’re doing it, and without the sign-off of a judge.

America is passing through an environment heavy on suspicion and light on responsibility, at least when it comes to government representatives and privacy. The Patriot Act has acted like the “anchor store” at a mall and attracted all manner of switch-cheating quasi-legal moves that allow those with badges to rifle through the belongings of those without, without needing a warrant. The warrant itself seems to be joining things like the home telephone as a relic of the American past.

As Cyrus Farivar notes on Ars Technica, “Under the Fourth Amendment to the United States Constitution, Americans are generally protected from unreasonable searches and seizures by government agents. But we generally have less privacy at the border—usually when entering the United States from abroad.”

The atmosphere of “national security” imperatives has intensified this looser world of the border.

According to the Department of Homeland Security’s (DHS) December 2011 Civil Rights/Civil Liberties Impact Assessment, obtained by a Freedom of Information Act request filed by the American Civil Liberties Union (ACLU), only 302 travelers had their electronic device searched in 2009 and 383 in 2010.

While maintaining that “The laptop border searches… do not violate travelers’ First Amendment rights as defined by the courts,” the DHS nevertheless insists it cannot change its policy to accord with “reasonable suspicion.”

“Under a reasonable suspicion requirement,” DHS officials wrote in the assessment, “officers might hesitate to search an individual’s device without the presence of articulable factors capable of being formally defended, despite having an intuition or hunch based on experience that justified a search.”

They also stated their fear that such a “suspicion-based” search could lead to court challenges of their work.

If your response to this justification is “so what?” you’re not alone. In a blog post, the ACLU’s Brian Hauss wrote, “Although DHS might fear the prospect of being called into open court to explain its actions, executive accountability before the law is the bedrock on which our system of constitutional self-government is built.”

He goes on to say that this “‘hard-to-articulate hunch of a border agent’ cannot possibly be considered enough to justify the surrender of both constitutional privileges and access to our personal lives.

Unfortunately, the Obama administration is far from malleable in its clear willingness to trade civil rights for perceived security, going so far as to criminalize whistleblowing, for instance, to a level the previous administrations could hardly have imagined.

So, the likelihood of the government backing down on its backing of border guard hunches—the new backbone of the American security regime—seems low. What can you do to fight against this national-defense-via-gut-feeling? Purge your cache.