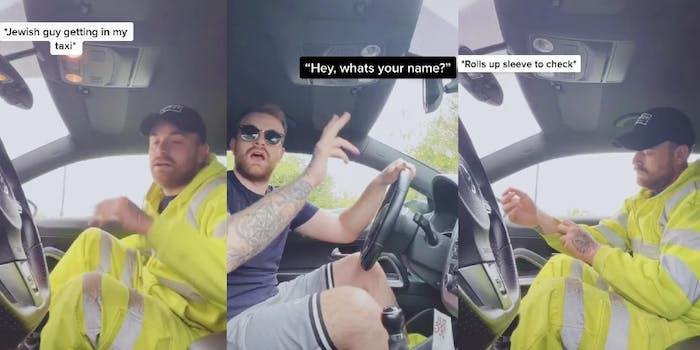 Many in the Jewish community are calling the video anti-Semitic.

A TikTok video joking about tattoos given to Holocaust prisoners at concentration camps has gone viral receiving over 600,000 views.

The video was uploaded on April 28, by Bradley Brooker from the United Kingdom. The viral clip is set to a remake of the 90’s hit “No Scrubs” by TLC.

The video starts as a man gets into a taxi cab under the subtitle “Jewish guy getting in my taxi.” The driver then asks for the passenger’s name, and he is seen rolling up his sleeve to check what appears to be a tattoo. The driver is then shown lip-syncing the lyrics, “No, I don’t want your number,” which is a reference to the Holocaust tattoos given to Nazi prisoners.

The controversial clip has been “liked” over 63,000 times.

Although the video continues to be popular, many, especially in the Jewish community, are calling the video anti-Semitic.

Their point is hard to miss as the object of this dark humor has an even darker history.

The system of tattooing was started in Auschwitz and was used to identify those fit to work in Nazi concentration camps. The practice of tattooing Nazi prisoners was part of a psychological system designed to dehumanize them. Prisoners no longer had a name and were instead given an identification number they were forced to memorize.

According to War History Online, some Jewish people still branded by the Holocaust tattoos have stated that ” the mere sight of that hateful ink on their skin was too much to bear, reminding them of the most degrading, fearful, and arduous period in their life.”

In a statement on Monday to the Jewish Chronicle, Brooker stated, “If you read through the comments on the video there have been Jewish people finding the funny side to it. It’s not me hating a religion––it’s just a joke.’’