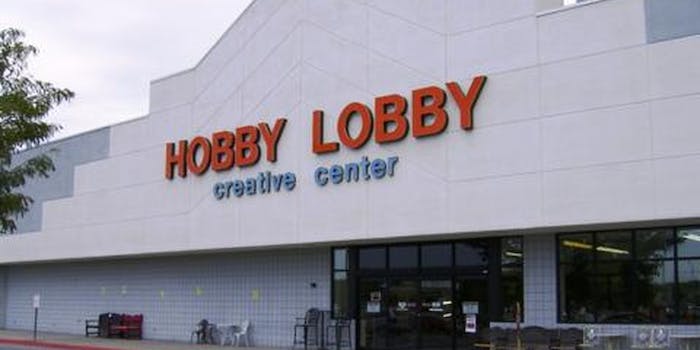 One blogger claims he was told, "We don’t cater to you people."

At least, that’s the claim of a couple of bloggers who tried to buy Hanukkah decorations at the well-known crafts chain recently.

First, on his blog Hopelessly Partisan, writer Ken Berwitz wrote about an experience at the Hobby Lobby in Marlboro, N.J., where his friend was told, “We don’t cater to you people” by a store employee after asking about bar mitzvah cards.

On AddictingInfo.org, Russo writes, “They also noted a glaring absence of Hanukkah-related crafts and decorations in the sea of Christmas-kitsch that dominates every Hobby Lobby after Labor Day. The New Jersey sales associate attributed the lack of Jewish merchandise to the company’s notorious fundamentalist CEO, David Green.”

On Hobby Lobby’s website, the company’s mission statement says that employees “[h]onor the Lord in all we do by operating the company in a manner consistent with biblical principles.”

In the days following Berwitz’s post going viral, Hobby Lobby PR responded saying that the comments by that employee were under investigation, but that they do not reflect Hobby Lobby’s official stance on Semitic peoples.

However, Russo went to her own local Hobby Lobby in Hixson, Tenn., and had a similarly anti-Jewish experience.

Russo wrote, “ I politely spoke to a young sales associate and asked her if it was true that Hobby Lobby did not carry any merchandise related to Jewish holidays. She looked at me like a deer in the headlights and said, ‘We’re a Christian company. I’d—it’s nothing personal. If it were up to me, you know…’”

Russo then called the store and spoke to the manager, who said he did not know anything about Hobby Lobby’s stance on selling Jewish merchandise.

“Next step: I, along with thousands of others, posted on the company’s Facebook page asking why Hobby Lobby doesn’t carry Hanukkah merchandise,” Russo wrote. “My comment was deleted within seconds.”

Then, last night, Hobby Lobby took to Facebook to apologize to their Jewish customers and friends.

“Comments like these do not reflect the feelings of the Green family or Hobby Lobby. We are investigating this matter and do not tolerate discrimination at our company or our stores,” the company wrote.

“Hobby Lobby is currently working with our buyers over our merchandise selection. Our customers have brought this to our attention, and we are currently evaluating our holiday items and what we will carry in the future.”