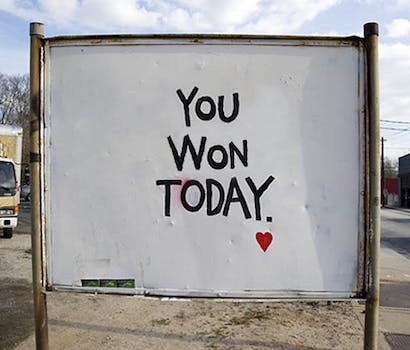 H&M to Regretsy: “You Won Today”

Just when it looked like the controversy had quietly dissolved, the Regretsy community came together once more to help Atlanta street artist Tori LeConsay.

After previously making PayPal eat its words, the Regretsy community has added another cowed corporation to its track record by helping an Atlanta street artist receive a complete apology and settlement from H&M.

The controversy started in late January, when artist Tori LeConsay wrote a letter to Regretsy blogger April Winchill about her plight. LeConsay’s scripted message to her neighborhood, “You Look Nice Today,” had been repurposed by H&M without her knowledge.

“I think it is pretty obvious what H&M have done,” she wrote at the time. “I hoped you wouldn’t mind sharing this with your readers.”

More than 100,000 members of the Regretsy community flocked to H&M’s Facebook page to bombard the retail chain with angry comments. After nine hours of this barragement, H&M updated its status to say it would discuss the situation with LeConsay.

On Friday, however, Winchell updated Regretsy to let readers know the talks had come to nothing. LeConsay sent another email to say that H&M didn’t plan to compensate her in any way for using her artwork. Since the story was no longer viral, the company no longer felt pressured to apologize, she said.

LeConsay, who had wanted to use the compensation to donate to animal rescue organizations in Atlanta, was crushed.

“I would like to state that my objective has never been financial gain. My goal was to be credited, and to see H&M apologize for the theft. I believed that this would make it harder for them to steal again, and would set an important precedent for other creative people.”

LeConsay’s second letter to Regretsy—and the threat to H&M’s business that came with it—turned out to be exactly what the company needed to be persuaded to settle. On Saturday morning, LeConsay wrote a third letter to the community:

“In a gesture of kindness, H&M has offered not only to settle this matter with me, but also with the public at large, by donating $3,000 towards animal rescue organizations in the East Atlanta Village,” she wrote.

Winchell illustrated the letter with a Photoshopped instance of LeConsay’s original artwork, manipulated to say “You Won Today.” The fact that H&M changed its tune so quickly after the threat of another Regretsy pummelling indicates the parody site’s rise as a force to be reckoned with and as a defender of artists’ intellectual property.

“I credit the entirety of this WONDERFUL outcome to the support of my friends and neighbors, the East Atlanta Village, and most of all, the Regretsy community,” LeConsay wrote. “If it weren’t for the kindness, generosity and determination in communities both geographic and digital, we would not have reached this resolution.”