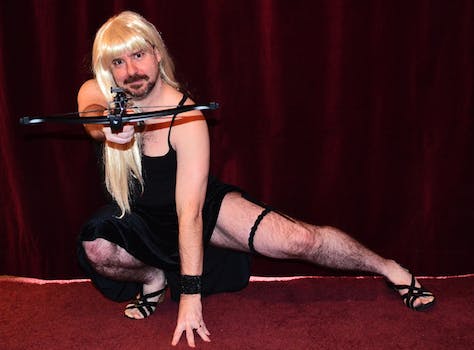 They're raising money for the Aicardi Syndrome Foundation, and more than a dozen poses are on their way.

Imagine you’re a reasonably intelligent space alien studying humanity from a distance, and your only information about the female of our species comes from the cover art of sci-fi, fantasy, and comic books. What do you conclude?

Fantasy author Jim Hines has long been bemused by the implausibly sexy women in his books’ cover art, and to underscore just how ludicrous those poses were, last January he reproduced those poses for his blog. He wrote at the time:

“[P]osing like these characters drives home exactly what’s being emphasized and what’s not. My sense is that most of these covers are supposed to convey strong, sexy heroines, but these are not poses that suggest strength. You can’t fight from these stances. I could barely even walk.”

The “sexy” photos of Hines became his most-viewed blog post ever. Fans sent suggestions of other ridiculous sexy poses he could imitate, and a friend on Twitter offered him five dollars to re-create a certain one.

That gave Hines an idea. A friend’s daughter had recently died of Aicardi syndrome, a rare and little-understood genetic brain disorder usually leading to severe intellectual and visual disabilities. So Hines decided to model for money, and he held the inaugural Cover Pose Fundraiser for the Aicardi Syndrome Foundation.

When Hines’ friend and fellow writer John Scalzi joined in, the fundraiser became a “Pose-Off with John Scalzi.”

Scalzi, meanwhile, announced the contest to his own blog readers by promising, “My dear friends: you will not be able to unsee the unspeakable terror that is the Jim C Hines/John Scalzi Cover Pose-Off.”

Scalzi and Hines decided to first re-create the sultry pose found on the cover of The Taste of Night by Vicki Patterson. True to Hines’ earlier complaint about fantasy art poses—“you can’t fight from these stances”—it shows a sexy woman aiming a crossbow she can’t possibly shoot and wearing a clingy black spaghetti-strap evening gown that, according to military historians, would have been worn by exactly NO crossbow warriors ever.

Hines worries that Scalzi might actually win the posing competition: “I don’t know what master he trained with, but whoever that wise and sadistic sensei might be, they turned Mister Scalzi into a posing opponent to be feared. John went all out in his own, special way,” he noted.

If you’d like to donate to the Aicardi Syndrome Foundation without subjecting yourself to pictures of hairy-legged, bearded men in skimpy clothes and provocative poses, you can do so here. But if you want to see Hines and Scalzi in all their scantily clad sexy-babe glory, Hines says, simply donate to the foundation and “In exchange, I will give you what the internet has deemed my most important contribution to society: ridiculous cover poses. All you have to do is email me at [email protected] letting me know how much you donated. If you give more than $25, please include a copy of your receipt from the foundation.”

He’s picking random contributors to suggest poses for the pose-off, and he’s keeping it running through the end of the year. With $6,500 raised so far, 13 poses are on the slate, and they’re getting close to their next goal.