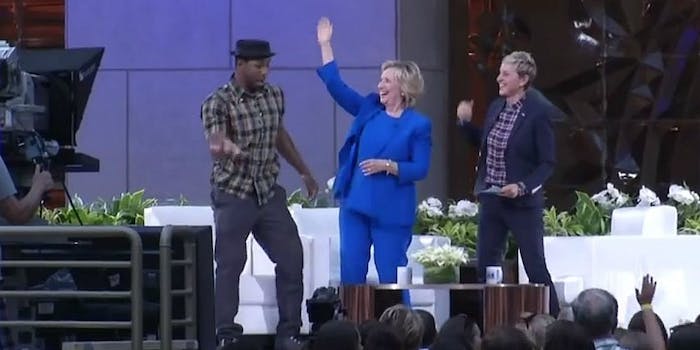 Are Hillary Clinton’s Whip and Nae Nae good enough for the White House?

So you think you can dance your way into office?

Hillary Clinton is struggling in her attempts to win the Democratic nomination for president. She remains unlikeable, according to the polls; Bernie Sanders seems to have caught and/or surpassed her; and she’s still got that lingering email issue from her tenure as Secretary of State.

What do people do to relieve their stress? They dance, obviously. Thus, when Clinton sat down with Ellen DeGeneres for an interview, everyone expected that she would jump out of her seat afterward and showcase her best moves. Even better, Clinton learned something.

And in endless Vine form:

It looked like she was having fun! But now is not the time for fun. Now is the time to be serious. When we elect the next president in 2016, that person better damn well have some serious dance moves so that we, as a country, can be proud.

Let’s break this down scientifically yet subjectively, comparing Clinton to other presidential candidates who have danced in the past. We’ll rank them on a 1 to 5 scale (1 is low, 5 is high) based on their dance moves, their confidence, and their pandering effectiveness.

Only slightly less dangerous than getting into the boxing ring with Evander Holyfield was Mitt Romney attempting to Gangnam Style.

His dancing performance is almost too short to judge, and he had already been beaten by Obama in the 2012 election. But props to Romney for being a good sport.

The senator from Arizona doesn’t always dance conservatively—check him out doing the Robot, years after he lost to Obama in 2008—but he was far too right-wing in this moment. And he failed to showcase his talents at a time when he probably could have used a nice boost in the polls.

When you think Rick Perry, your next thought is likely “rabbis.” So, here’s Perry dancing with a few of them. Yep, this isn’t awkward at all.

See above. There’s little doubt that Clinton needs to come off as likeable—and coming off as hip wouldn’t be a bad idea either. To me, her dancing was decent yet unremarkable. It certainly didn’t match her dancing with Bill.

It’s hard to believe now, but at one point, Rudy Giuliani actually was a candidate for president, and based off his leadership as the mayor of New York on 9/11, he actually made an impact in the 2008 presidential race.

This dancing was from 2000, but that doesn’t mean we shouldn’t include it. He won’t get high marks for pandering here, because he wasn’t running for president at the time. But the effort and enthusiasm are extraordinary. The dancing, though, is somewhat ironic, because it seems like Giuliani doesn’t like it when other people want to dance.

Two seconds after Obama emerges from backstage, he begins to dance like he owns the studio. And it even feels like he’s holding back a little—like, he could have really torn down the place if he’d wanted.

Obama’s competence and his stamina are impressive here, and though I don’t want to say that this was the exact instant Obama won the presidential election, it pretty much was.

This video was made to go viral, and it did. Because it, and Christie, are so damn good. This is the epitome of what a presidential-candidate-dancing video should be—fearless, funny, and phenomenal.

As far as we can tell, most of the current Republican presidential candidates have not shown off their dance moves, so at the end of last season, Saturday Night Live had to do it for them.

Who knew Marco Rubio was so agile?