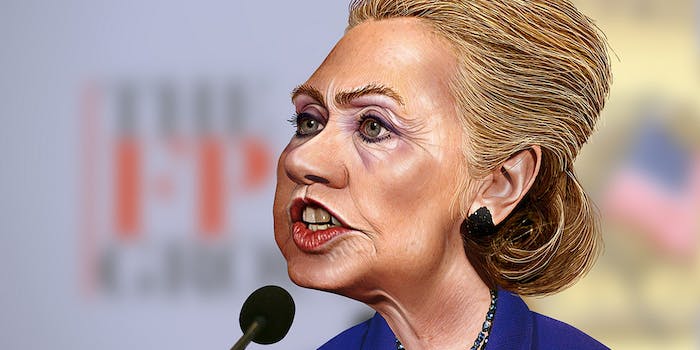 If the media wants to complain about trust issues, it has only itself to blame.

Last week, the New York Times broke the news that presumptive presidential candidate Hillary Clinton had used personal email for State Department correspondence. The result was a flurry of media attention, thinkpieces, and commentary, but many Americans don’t even know about the situation, aren’t following it closely, and don’t particularly care, according to a poll administered by Mic. The situation highlights a growing issue with the U.S. media: Instead of reporting, the media is trying to make the news. Consumers, tired with this transparent plea for their attention, are starting to distrust the media as a result.

The Times coverage was important. Investigative journalism of this nature provides information relevant to the public, creating transparency. Without these kinds of investigations and discussions, Americans can’t make informed choices in elections or learn more about what’s going on behind closed doors. In this case, though, what happened next highlights the increasingly slippery divide between covering news and manufacturing controversy.

As Joe Biden would say, the use of personal email for government correspondence is a big deal. It’s also a systemic problem, with numerous agencies called on the carpet in recent years for similar practices. A policy of only using email from government domains would increase security and transparency, especially with the failsafe of remote backups officials can’t access, thus solving the problem of “mysteriously” erased and missing email. Exposing yet another case of an official abusing personal email—to the point of hosting her own server—is exactly what the media is supposed to be doing.

But the reporting focus isn’t about the security issues and policy solutions—it’s about manufacturing a scandal. This is turning consumers off, as they can smell a rat even when it’s dressed up in partisan pandering. The Mic study shows that while some of the public is interested and following the case, they aren’t reacting to it in ways the media seems to want them to. People are more or less apathetic, with the news only affirming their previous beliefs. In a sense, this isn’t about whether use of private email is acceptable, but about how the media reports on the news.

In the Mic poll, around two thirds of the 1,040 respondents selected at random through Google Consumer Surveys weren’t even aware of the news—a feat, considering how widely it’s been reported. Of those, nearly 80 percent said the news didn’t influence their opinion of Ms. Clinton—though the poll didn’t ask whether that opinion was positive or negative. Of the remaining 20 percent, most reported that the news made them feel more negatively. These poll results could be viewed as a depressing illustration of American political engagement—or as a sign that consumers are actively avoiding the media.

Republicans—who already dislike Clinton—were more concerned than Democrats, and those in the middle seemed largely indifferent. “Although 65 percent of Americans still expect her to get the Democratic nomination,” Ariel Edwards-Levy writes at the Huffington Post, “the divided reactions to Clinton’s emails confirm that any bipartisan appeal she had during her tenure as Secretary of State is largely gone.”

At the National Journal, Charlie Cook writes: “This is the classic kind of inside-the-Beltway, process story that politicos and reporters get in a lather over but that resonates very little with average voters. Most Americans don’t know or care what happens to the old emails of public officials. But chasing shiny objects is an occupational hazard for political journalists during odd-numbered years, because of the infrequent developments of real significance.”

People are reading the news, but their reactions to outrage journalism are starting to fade. Intriguingly for an era of young “digital natives” who have access to scores of news sources at their fingertips, older participants were actually more likely to be aware of the possible ethics breach at the State Department. People in the 18-24 age group were the least likely to know about the Times report, despite being exposed to online media on a daily basis.

Ninety percent of people in the 18-29 age bracket, for example, are active on social media, where stories about the email scandal have been prominently featured; it briefly appeared as a trending topic on both Facebook and Twitter, but many users somehow missed an arguably important piece of political breaking news.

News outlets are well aware that presidential election cycles can provide prime opportunities for consumer engagement. That creates an incentive to generate more news—or the dreaded buzzwordy “content”—where none exists, which brings them up against the wall of the manufactured controversy. Since most Americans don’t care about insider politics of this nature—or may not even understand the security issues involved—the media has to find a way to make it matter.

One of the principles of journalism is the precept that reporters on straight news subjects should not be involved with their subjects, but that line is violated more and more every day. Fox News best exemplifies this approach to content, with its infamous “fair and balanced” coverage turning what should be basic news reporting into opinion editorial. Fox’s hosts and personalities add their own color commentary and thoughts on the news and get directly involved in the narrative to sway public opinion and center themselves in the very stories they’re reporting.

Clear-headed investigative journalism in this case and others of a similar nature reveals that this is an ongoing issue and the government has not moved to address it. This should be a matter of public interest as well as one of national security concerns. The next step should be developing a plan for securing email in the future, preventing breaches and creating a standardized policy for handling email correspondence between agencies and individuals. In this case, however, the media’s focus is on dogpiling on an individual candidate, an activity best left to opponents, not organizations responsible for reporting the news.

In 2012, Lymari Morales at Gawker noted that “Americans’ distrust in the media hit a new high this year, with 60 percent saying they have little or no trust in the mass media to report the news fully, accurately, and fairly.” This trend in news is a troubling development, as a nation where balanced and aggressive investigative reporting is replaced by outrage journalism is not a well-informed, smart nation. Americans distrust the media for a reason, and it’s time for the media to rethink whether fighting for pageviews is the best way to serve the American public.