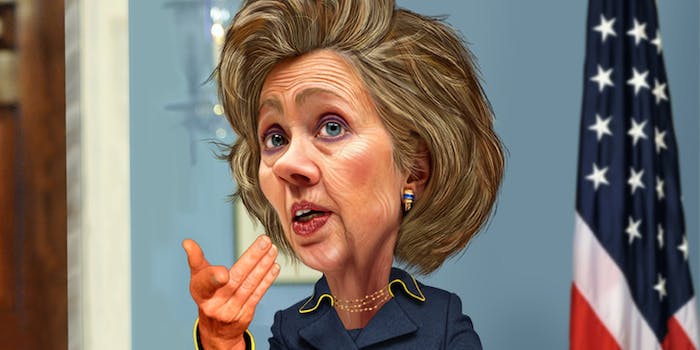 Your sexist comments about Hillary Clinton only make her stronger

It's not her age that's the problem. It's Twitter.

When the news broke Friday that Hillary Clinton will announce her 2016 presidential bid Sunday, Twitter filled with the sexist name-calling that has greeted Clinton throughout her time in the public eye. She’s ugly, fat, a lesbian, a combination thereof. This time, though, they’re also calling Hillary old.

At first glance, this is infuriating—until you realize that this may be the last time anyone thinks it’s an effective slur to call attention to a female politician’s age.

First, let’s talk about the infuriating part. Picture it, intelligent, ambitious friends: You make partner at a law firm. You agree to give up your law gig when your husband gets a big job, then that same husband cheats on you. You stay with him anyway, and while you’re at it, you become a U.S. Senator. A few years later, a younger dude from Illinois gets another job you really want. Instead of crying about it, you go to work for him, and you are so good at it. You fly around the world, leading meetings at 3am and making decisions that impact the course of history.

In the meantime, you break the Internet with your badassery and on-point sunglasses game. And you get ready to go for that job you didn’t get one more time.

So when you do go for that job no one can say you aren’t driven or smart or accomplished or loyal or resilient. They can’t even mock your hair or your pantsuits anymore, because even they realize that’s so 2000. They can’t dispute that you are the most powerful woman in the world. Instead, they focus on your wrinkles.

Young maybe, but never pretty. RT @bob16066: Why do they keep showing young/pretty Hillary.
They should show the old hag she is today!!!

It’s enough to make the rest of us wonder whether our hard work is really going to pay off, or we’re going to be ridiculed and devalued the first time a colleague spots some crows feet. If that’s what’s ahead, wouldn’t we all be better off staying in bed with our Netflix?

This may be the last time anyone thinks it’s an effective slur to call attention to a female politician’s age.

Ageism, when it targets female public figures, is absolutely gendered. Refreshingly, many of the folks posting photos of Clinton’s face and calling her a hag aren’t even pretending that their criticism is grounded in honest concern about Clinton’s ability to do the job at the age of 69, the age she would be when taking office. The tweets contain images, and their language is visual. This is entirely about the former Secretary of State’s looks, which means it is entirely about tying her worth back to her sexuality, rather than her work. And until recently, we were a culture that uniformly portrayed older women as asexual, which meant they were invisible. Emphasize Clinton’s age, make her disappear.

Except that right now, this specific vein of criticism has never been more, well, tired. Because at this particular moment, we’ve never been more insistent that older women remain not only visible but venerable. By now everyone is familiar with the Notorious RBG, a Tumblr started by

NYU law student Shana Knizhink to celebrate the general amazingness of 82-year-old Supreme Court Justice Ruth Bader Ginsburg, who has spent her career fighting for the fair treatment of women under the law. The Tumblr has given rise to T-shirts and an “unobjective biography” by Knizhink and MSNBC reporter Irin Carmon, which is due later this year. An octogenarian has become an idol.

Meanwhile Hollywood, which is rightly blamed for 20-year-olds wanting Botox, has also gradually begun to make older women more visible and not to portray them as fragile or senile but shrewd, accomplished, and—shocker—desirable. Diane Lockhart on The Good Wife and Claire Underwood on House of Cards are both well over forty. Both are portrayed as not only fierce but also sexual.

And while Maggie Smith’s Dowager Countess in Downton Abbey is not a sexualized character (Season 5’s reignited flirtation with a Russian Prince was never really headed in that direction), she is the ultimate GWBNS (Grandmother Who Brooks No Sh*t).

Until recently, we were a culture that uniformly portrayed older women as asexual, which meant they were invisible. Emphasize Clinton’s age, make her disappear.

Meryl Streep, Judi Dench, and Helen Mirren have become the subject of online worship as they continue to get meaty roles.
Way back in 2012, Hillary Clinton got the same treatment. When Stacy Lambe and Adam Smith, two young dudes working in D.C., started the Tumblr “Texts from Hillary,” it went viral almost instantly. Like Notorious RBG after it, it celebrated its subject’s decisiveness, experience, and most importantly, her power.

All of which has made this an actually OK time to run for president as an older woman, which makes it a more OK feeling time to be a woman in general.

When Hillary Clinton celebrated becoming a grandmother so publicly in 2014, I worried that she was giving critics ammunition for when she finally, inevitably announced her second presidential bid. More so than all the times Clinton rocked a scrunchie, she was basically inviting them to call her old.

It now looks like that is exactly what she was doing, She even mentioned her grandmother status again yesterday when she released an the epilogue to her most recent book, Hard Choices, in advance of her announcement Sunday. Referencing little Charlotte Clinton Mezvinsky often not only signals to the record number of Americans over 65 that Clinton is one of them, it registers awareness of the way the Internet has rallied behind iconic women, Clinton included, because of their experience and maturity. In light of that, tweets like this look older and more out of touch than they claim Clinton is:

Hammering home her age may actually be one of Clinton’s shrewdest political moves yet. I think Clinton gets that, yes, we all share Beyoncé’s vision of a world run by girls, but sooner than that, many Americans, at least ones who use the Internet, are ready for a world run by an older woman who knows what she’s doing. And that, in turn, makes for a culture where the rest of actually look forward to getting older. Like this young woman:

There’s your reason to get out of bed.

Margaret Wheeler Johnson is the Deputy Editor of Bustle. Previously, she was the founding editor of the Huffington Post’s Women’s section, and she has also worked on the editorial staffs of Babble.com and Vogue. She grew up in New Orleans, went to Princeton, lived in Brooklyn, and has finally dropped anchor in Manhattan.