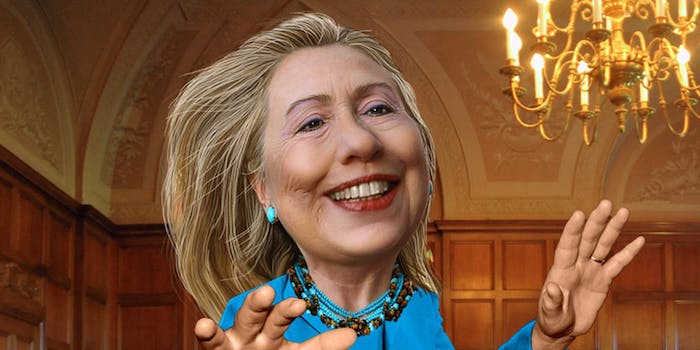 How the Internet killed the celebrity AMA

Q: What did we learn from Hillary Clinton's Twitter chat? A: Nothing.

When we see a politician interviewed on TV or in print, what we typically want the interviewer to do is ask them questions they are unprepared for. Commonly disregarded as “gotcha” journalism, asking those in power off-the-cuff questions should be the aim of any good interviewer. Politicians spend millions of dollars finessing a highly-enriched product—themselves—and a journalist’s job should be to whittle away that artifice.

That’s why it is disheartening to see high-powered Washington elites relying on gimmicky online Q&As or “digital town halls.” Hillary Clinton, for example, recently took to Silicon Valley and paid a visit to the headquarters of both Twitter and Facebook. While there, she fielded questions from both those sites respective user bases.

Very little was hard-hitting: Clinton dodged questions about her 2016 ambitions, took the bold stance that women have it harder in professional life, and slightly revealed that she may watch Scandal (a show that arguably wouldn’t exist without her husband). While she did offer some talking points on Gaza, there was very little in the way of actual substance (especially on the part of these discussions’ moderators who offered next to no follow-up questions).

What Hillary Clinton and others before her want this type of digital theater to accomplish is make them appear more open and more caring about what matters to the actual public. Far from what she would face in the hands of a talented journalist, however, these appeals to the masses only serve to foster an artificial vulnerability.

The very structure of most social media means that any high-profile account wanting to take questions from the community at large can handpick which questions they want to answer. When the President does an AMA on Reddit, for example, he (and his team) can easily prepare every talking point they possess and face little to no repercussions for ignoring questions that don’t fit into the narrative they’ve worked so carefully to craft.

In a one-on-one interview, however, it becomes immensely more difficult for even the most seasoned pols to avoid questions they are uncomfortable with. The very idea of a blank space in front of a hard-hitting policy question is terrifying to any candidate, but only when it is in real time.

Leaving questions unanswered on Reddit, Twitter, or Facebook, however, is not merely easy but free of most any actual consequence. When Hillary Clinton, the most admired woman in politics for at least the last seven years, fields questions from millions of people at once (#AskHillary was the top-trending topic during her Q&A), the press and public will naturally zero in on what she had to say.

However, to paraphrase the old jazz adage, it’s the notes the politician isn’t playing that make the difference. By soliciting questions from the public at such a grand scale, politicians manage to appear more personal while actually making themselves less so. It’d be entirely unreasonable to expect Clinton or anyone else to give detailed answers to every question they get from what might as well constitute the entire general public, so they get a pass on answering what are essentially cherry-picked questions and ignoring the others.

Of course, this structure isn’t entirely specific to social media. When a debate organizer selects members from the crowd to ask pre-selected questions of the candidates, it’s pure theater. These poor souls are simply asking the questions the moderators would ask, anyway. In fact, it’s politics’ worst kept secret that many campaigns will stock the crowd with their own supporters, scripted questions in hand. Clinton herself was caught doing this during her last Presidential run, swapping out a student’s question about health care for a question about jewelry.

This cannot, however, simply be laid at the politicians’ feet. The press—and cable news, in particular—often attempt to hide their gilded status as gatekeepers by opening their Twitter feeds to questions. They’re akin to a talk radio host who screens his calls for only the nuttiest discontents, simply to reinforce their own popularity and ego.

Our first glimpse of this cowardly new world was in 2007, when CNN teamed with YouTube to host the world’s first Presidential YouTube debate, wherein GOP and Democratic primary candidates were asked questions by YouTubers. What followed was one of the great farces of the digital age.

By abandoning the typical structure of a team of moderators facing a field of candidates, CNN and YouTube attempted to recreate the town hall format with a Millennial twist. What they got instead were nutheads calling their rifle “baby” and a bemused Mitt Romney being asked about global warming by a poorly-voiced snowman. CNN simply asked whatever questions they would have anyway, so what’s the point of involving the public at all?

This is not to say social media has no role to play in holding those in power responsible. The Internet has been a great tool for social justice since the delirium of such niche movements as Operation Clambake (which protested Scientologists before anyone stateside even knew what Guy Fawkes looked like) all the way up to Occupy and the Tea Party.

However, outside of this capacity, social media is at risk of becoming an even larger mouthpiece for politicians than cable news. By simply exhibiting the same glad-handing we could see out of Hillary Clinton at a fundraiser, venues like Twitter and Facebook prove themselves useless as megaphones for the people.

The very numbers of their user bases mean any leader can seek only the questions they want to answer and abandon the rest. Social media by its very structure is pointless as a vehicle for useful political debate. So let’s stop pretending that any political leader is going to willingly subject their crafted image to scrutiny. If they barely let the press do it, they certainly aren’t going to allow you.