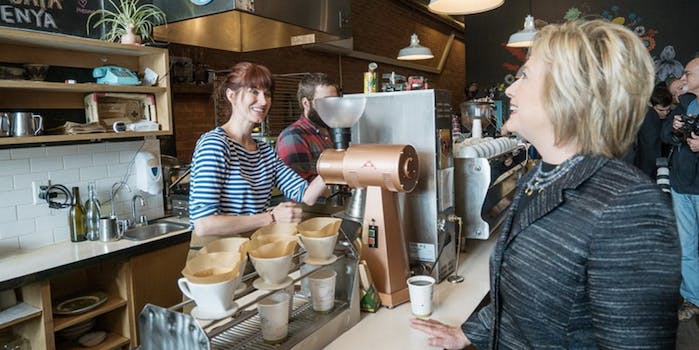 The 2016 presidential race has given us plenty of opportunities to laugh, squirm, gasp, and more. From an audience asked to clap by failed candidate Jeb Bush to people arguing that Bernie Sanders is the Zodiac Killer (assuming Ted Cruz isn’t), there’s been a steady stream of highly entertaining nonsense.

International Business Times‘ Brendan James has preserved the disaster on Twitter: Clinton’s social team posted a picture of the candidate with a barista and geotagged the snapshot at Avalon International Breads in Detroit. The original caption read: “Inspired by the women who started @AvalonBakery. Highly recommend the coffee, too.”

But the woman in the photo didn’t appreciate being a Clinton prop. She commented, “That’s me and I’m voting Bernie. I’d like it if you took the pic down.”

Clinton’s social team has since edited the picture’s caption to “Highly recommend the coffee at Astro” and updated the location to “Detroit, Michigan.” That’s because they screwed up in more ways than one: The photo wasn’t taken at Avalon Bakery but Astro Coffee. And the photo is still up despite the barista requesting its removal.

Hillary, I highly recommend you listen to this woman, because the Berners are coming after you.

Highly recommend the coffee at Astro.

Comments on the photo have since swirled into a frenzy of Clinton supporters versus Bernie lovers. Others have demanded that the Clinton campaign #freejill and supported the barista with the hashtag #imwithjill.

Meanwhile, James reminded us that a similar encounter went down between Rahm Emanuel and a man who wasn’t a fan of the Chicago mayor.

this is a solid sequel to the greatest of all time pic.twitter.com/eyY3USYMuR