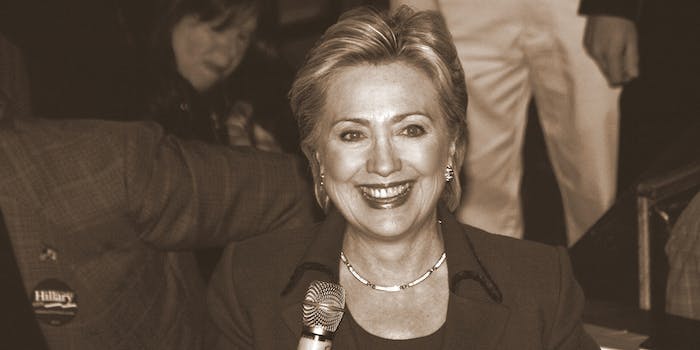 In order to gear up for the presidency, Hillary Clinton became Washington's "cool girl."

Hillary Clinton is one of the most high-profile women in U.S. politics today, and that comes with a heavy cost. She’s criticized for not wearing the right outfits, for not caring enough about her appearance, for crying during the 2008 presidential campaign, and for not having made the right choices during her time at State, among everything else you can think of.

While close scrutiny and criticism is par for the course for any public figure, especially in politics, Hillary has been in for a double dose because she’s not just a politician: She’s a woman, and the wife of Bill Clinton, no less, which allows critics to weave in lewd comments about Monica Lewinsky and other juvenile remarks into discussions that are, ostensibly, about Mrs. Clinton.

Like other women in politics, Hillary Clinton has had to fight back hard against sexism, often confronting it with humor and deflection. She’s chose to take the “one of the boys” route in her confrontations with Washington sexism, rather than addressing it head-on. It’s a common defense not just for women in politics but for women across a number of fields, including tech, science, and business, where women perceived as “masculine” tend to get further ahead than those who are too “feminine.”

A large part of the reasoning behind Clinton’s decision to harden up likely has to do with the looming 2016 election, as she attempts to position herself as a tough, no-nonsense woman who can take charge of the White House—but is it fair to young women and girls who look up to Hillary as an inspirational figure?

In her recent book Hard Choices, chronicling her time at the State Department, Hillary Clinton makes a telling comment about the sometimes horrifically misogynistic and abrasive commentary slung her way: “One silver lining of defeat was that I came out of the experience realizing I no longer cared so much about what the critics thought about me… The campaign certainly tested me on that.”

In other words: Let it roll off you like water off a duck’s back, or you’ll be another one of those weak, flailing, girly-girls who can’t be trusted to head up a major U.S. agency. There are no seats in the nuclear bunker for pansies. There is no crying in politics, and it’s time for us all to get serious here.

She’s taken the same messaging to the digital world and the younger generation, too. She got on board with the popular “Texts From Hilary” Tumblr account, poking fun at herself to indicate she wasn’t above it all, and she just gave a Q&A at Twitter headquarters. When actress Kerry Washington (of TV’s Scandal) asked Clinton about what advice she would give to young women considering careers in politics and public service, Hillary’s response was:

Grow skin as thick as the hide of a rhinoceros. I have certainly, as you can tell, have had to learn how to do that, and there’s a lot of good moisturizers I can tell you about if you’re interested. The second thing is to learn how to take criticism seriously but not personally.

Sounds like nice advice, but how are women supposed to take it seriously when outspoken women around the world are receiving rape and death threats just for having an opinion, are being shot in the head for wanting to go to school, are being harassed in their workplaces to the point of quitting in desperation rather than dealing with it anymore, and are being dragged through the mud on political campaigns and while in office? “Suck it up, buttercup” just isn’t going to cut it in the face of such widespread misogyny. As a leader, Clinton is failing women and girls by suggesting the solution is just that simple—we all know that “ignore the trolls” doesn’t work.

Clinton’s eagerness to be perceived as one of the cool kids is clearly linked to her desire to convince the American people, and the world, that she’s ready for the responsibilities of high office. In a world where sexism is king, any hint of the feminine is regarded as a negative trait, rather than a neutral or even positive one. Consequently, Hillary Clinton is presenting herself as a hardened, unflappable woman who can take on anything and anyone, a woman without emotions, because emotions are too weak and girly to have a place in the White House.

Similarly, President Obama was often pushed to stay away from racial issues during his campaign to avoid being perceived as too racially sensitive for his role in office. Both candidates dealt very directly with hate and bigotry during the 2008 race, including from members of their own party, and they were forced to choke it down in order to keep their eyes on the prize. The fact that politicians from marginalized backgrounds can’t openly acknowledge their identities and talk about the effect that discrimination has on them is a telling testimony to the strictures on public speech for politicians.

Clinton undoubtedly saw the way Sarah Palin was pilloried for crying during John McCain’s concession speech in 2008. Hillary Clinton has witnessed the way women in politics have been trashed. Instead of engaging with the issue of sexism in politics and political reporting, she’s chosen to turn her back on it. Clinton speaks passionately in Hard Choices about wanting to pursue a career in public service and feeling called to office, but isn’t a solid fight against misogyny one of the greatest acts of public service a high-profile woman can offer?

She clearly fears her political prospects for tackling sexism head-on, and it’s an unenviable position to be in. If she can play one of the boys long enough and make herself out as an untouchable “cool girl,” she might just grab the brass ring—but at what cost to other women? Is she hoping to make it to high office and then start fighting back, showing people firsthand just how effective a woman in politics can be? Or is her image as a hardened politician so engrained that it’s possible to shake?

Photo via taekwonweirdo/Flickr (CC BY S.A.-2.0)