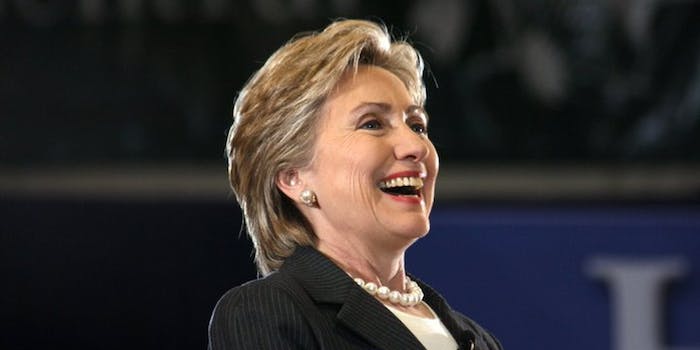 #Emailgate is far from the former Secretary of State's biggest problem.

You may be surprised to learn that Hillary Clinton is still the frontrunner in the Democratic presidential race—and that lead is only growing. Despite a constant barrage of criticism over her use of a private email server during her tenure as Secretary of State, Clinton remains ahead in the polls. A recent CNN/ORC poll shows Clinton with an 18-point lead nationally over her nearest rival, Sen. Bernie Sanders (I-Vt.). Yet if you turn on network or cable news, pundits would have you believe Clinton is in crisis mode, her campaign imploding around her.

It’s just the latest example of the media’s unfair treatment of the former Secretary of State. This implicit bias is unfair to her, it’s unfair to the public, and it’s bad for our election process.

Hillary is no stranger to bad buzz. Her 2008 campaign was known for its rocky relationship with the press, in which polls found that the majority Americans recognized the implicit bias toward Barack Obama—who enjoyed much of the favorable coverage that Clinton was denied. (Saturday Night Live even spoofed it). Her relationship with the State Department press corp improved, but in March of this year, following the Washington Post’s scathing editorial on her use of a personal email server, relations with the media again soured. And the story has shown no signs of slowing down.

This implicit bias is unfair to her, it’s unfair to the public, and it’s bad for our election process.

It’s true that Clinton has a transparency problem, one which has arguably done her no favors. “Secrecy is to Hillary Clinton what sex was to Bill,” Roger Simon wrote at Politico earlier this year. According to one account by the journalist Carl Bernstein, the BIll Clinton campaign set up a “defense department” to specifically counter press attacks and scrutiny during the 1992 campaign. According to Thrush and Haberman, Hillary was personally involved in the operation, which they described as “a prototype of sort for Clinton’s fortress-like approach to press relations.” Since then, her dismissive attitude toward reporters has won her few allies.

But considering how frequently Clinton has been dragged over the coals, can you blame her? From criticism of her ever-changing hairstyles to her wardrobe, Hillary Clinton is caught in a perpetual double-bind. She’s either cold and aloof, such as when she answered questions about wiping the email server, or trying too hard, like during the infamous 1994 “pink press conference,” in which she answered questions about Whitewater while wearing a pastel pink suit.

Clinton herself has pointed this out, once saying that “the double standard is alive and well and I think, in many respects, the media is the principal propagator of its existence.” She can’t win for losing, even when she’s actually winning.

Despite continuing to lead in the polls, the news that the Federal Bureau of Investigations was able to recover emails from her private server has fanned the flames of the latest Clinton controversy. It has led to speculation that Democratic power brokers are privately pining for Vice President Joe Biden to enter the race as a “break the glass” candidate—and Clinton’s critics are already reaching for the little red hammer.

From criticism of her ever-changing hairstyles to her wardrobe, Hillary Clinton is caught in a perpetual double-bind.

However, there are two problems with this logic. First, the email controversy (I refuse to use the word “scandal”) has been blown grossly out of proportion. As the editorial board of New Jersey’s Star-Ledger wrote last month, “there is no evidence of criminal activity here, despite what her rivals claim.” It’s no surprise that the FBI was able to recover emails from her server; the tech company that managed it said as much earlier this month.

The second is that, as Politico today reported, leading Democrats aren’t exactly abandoning Clinton, even if they are concerned with the way she’s handled the server story thus far. Her backers may be “rattled,” but they’re hardly retreating. However, even that Politico piece had a headline which indicates her support is dwindling, even when the story itself indicates otherwise. That’s not surprising, considering what Nate Silver found in recent weeks in regards to Clinton’s media coverage:

By contrast, I identified just one morning since July 24 when a favorable headline for Clinton gained traction on Memeorandum (the endorsement of Clinton by former Iowa Sen. Tom Harkin), along with four other mornings when there was an ambiguous Clinton-related story making news, like this one about her comments on Jeb Bush.

There’s an easy way to put the coverage of Clinton and the server story in broader context: by looking at coverage of the GOP. After last week’s Republican debate, Carly Fiorina was praised for her performance, including receiving kudos for a powerful—and untrue—attack on Planned Parenthood. However, the media has not pushed back on Fiorina the way it has pummeled Hillary Clinton for, well, nearly everything she’s ever done. According to the Daily Kos, outlets from CNN to the New York Times have reported her claims as “said to be exaggerated” and “true but misleading” rather what they are: totally false.

It’s true that Clinton has a transparency problem, one which has arguably done her no favors.

Hillary Clinton likely considers this a part of the “vast right-wing conspiracy” that she believed was hell-bent to bring down her husband’s presidency, one she’s determined to fight. A pro-Clinton Super PAC, Correct the Record was founded in 2013, billing itself as “a strategic research and rapid response team designed to defend Hillary Clinton from baseless attacks.” Correct the Record is almost exclusively using social media to counter the prevailing Clinton narrative. This week, the group reminded Americans that #Emailgate isn’t just a Hillary problem—other politicians have engaged in similar behaviors.

If there’s a silver lining here, it’s that the Internet has offered a necessary balance to media bias. Sites the Daily Kos have been instrumental in calling out Fiorina, while Media Matters has addressed the inconsistencies and exaggerations in Clinton reportage. Meanwhile, social media has shown that Clinton continues to have broad support. The “Texts from Hillary” meme has become an Internet classic, and when Clinton joined Twitter in 2013, the Washington Post couldn’t deny her appeal, even with a backhanded compliment of a headline: “Hillary Clinton joins Twitter, sounds Human.”

Therein lies the problem for Clinton. Even when it’s good news for Hillary, her critics can’t help but to knock her down a peg. Hillary Clinton is an imperfect politician and has a lot of work to do if she wants to be president, but the press is going to have to finally start treating her as a candidate—not a scandal.

Photo via Victory NH: Protect Our Primary/Flickr (CC BY ND 2.0)