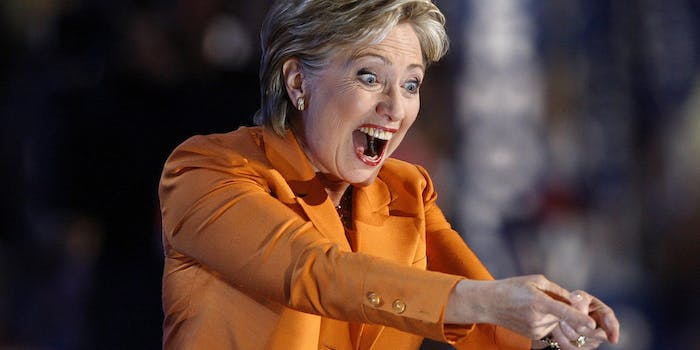 Why don’t Mike Huckabee and Chris Christie have an ‘authenticity’ problem?

Do you trust Hillary Clinton? More to the point, do you believe she represents herself authentically? When she says she’s bolstered by her Christian faith, do you believe her? When she famously teared up on the campaign trail in New Hampshire in 2008, what was the first thought to cross your mind—sincere emotional moment or coldly calculated ruse?

These aren’t abstract questions, and the answers to them are incredibly important. There’s no area in which Clinton’s political brand suffers more than on questions of trustworthiness, honesty, and authenticity. Even before Emailgate, it was a pervasive media narrative, reinforced by decades of investigations, instigations, and occasional conspiracy theories. These include absurdities from back when conservatives accused the Clintons of murdering Vince Foster during her tenure as First Lady to the endless Benghazi suspicions. Some are even more inane—remember when some theorized that Chelsea’s baby had been timed to help her mother’s public image?

But the question is why we continue to debate her authenticity so heavily. During her 2008 campaign, Hillary Clinton was subjected to overtly sexist attacks in the media—criticized for her appearance, her age, and her demeanor. Eight years later, it’s unacceptable to say that Clinton “looks like everybody’s first wife outside of probate court”—like MSNBC’s Mike Barnicle did—but that doesn’t stop her critics from holding her to unfair, gendered double standards when it comes to her candidacy. If you can’t call a woman a “ballbuster,” call her a “liar” instead.

@TheBriefing2016 @HillaryClinton You're a pathological liar and a grifter. What worse leadership qualities are there?

There’s a case to be made that if you dig around in a given politician’s affairs deeply enough, and for long enough, you’re going to eventually turn up something—whether or not it’s politically or legally significant. In a piece for Vox, Jonathan Allen explored this idea in a piece detailing the media’s unique rules for covering the Clintons:

One of my former colleagues, a hard-nosed reporter who has put countless political pelts on his wall, once told me that everyone in public life has something to hide. Who goes down in the flames of scandal? The politicians we decide to go after.

This has been true of Hillary Clinton her entire public life. Months before her husband was elected in 1992, they were already the targets of the lengthy and ultimately fruitless Whitewater investigation. This might partially explain her trust issue—especially after two decades of scandal-making—but how do you explain the glut of Republican candidates who don’t get the same treatment?

Gov. Chris Christie (R-N.J.), for one, has had a tenure that could be most politely described as mediocre and impolitely described as a scandal-ridden mess. Although Christie was rocked by the Bridgegate scandal that came under federal investigation for alleged misuse of Hurricane Sandy relief funds, he’s not described as “untrustworthy” and “inauthentic.” This is even though “dishonest,” “crook,” and “deceitful” were some of the most common words used to describe Hillary Clinton.

Look at former Arkansas governor Mike Huckabee. His recent track-record has given voters plenty of reasons to view him as insincere: his post-gubernatorial career selling Christian revisionist history videos; his endorsement of wildly unscientific, fallacious health remedies; and his bizarre decision to double-down on support for admitted molester Josh Duggar. And the list doesn’t stop there. Gov. Bobby Jindal (R-La.) claims to have performed a bedside exorcism. Former Texas governor Rick Perry—and recent electoral dropout—was actually under indictment. Any combination of these various transgressions would ruin Hillary Clinton.

This is the influence of implicit sexism on a presidential campaign. We’ve already seen what some GOP voters are willing to let their frontrunner get away with. After months of hate tweeting Megyn Kelly, Donald Trump’s “look at that face” remark about Carly Fiorina might be the most nakedly misogynistic quote from a presidential candidate in recent memory, delivered with all the confidence of a man who expects he’ll never have to say he’s sorry.

But it’s deeper than that. Back in 2007, former CNN personality Glenn Beck commented on Clinton’s presidential primary campaign. Here’s what he had to say:

It can’t be just me. I know it’s not. I mean, if there’s somebody in your life whose voice just sticks in your ear like an ice pick, somebody who makes every part of you just clench every time they speak. Yes, the senator and presidential hopeful Hillary Clinton has a voice like that. It makes me envy the deaf. It does. She could be saying, “All right, Glenn, I want to give Glenn Beck $1 million,” and all I’d hear is, “Take out the garbage.”

As pigheaded as his commentary might be, it’s surprisingly common—with Pat Buchanan and Fox News’ Marc Rudov making the almost exact same comment. And even this year, both the liberal Pacific Standard and the New Republic ran thinkpieces about why people hate the sound of Hillary Clinton’s voice. As the New Republic’s Elspeth Reeve wrote:

You know Hillary Clinton’s voice, right? I mean, you know it. It’s just so loud and annoying. Or maybe it’s like a nagging wife. Or inauthentic—that phony Southern accent! Those flat Midwestern vowels! Whatever it is, her voice is burned into your brain. Now think of Jeb Bush’s voice. It’s so—wait, what does it sound like again? He sounds just… like a guy, maybe? It’s probably hard for you to recall distinguishing features about most of the Republican candidates.

If Reeve argues that this is “because women’s voices are scrutinized more,” it’s hard not to come to the conclusion that this is true of how Clinton is perceived in general. When we scrutinize Clinton’s voice and her laugh or we call her conniving and calculating, shrill and icy, are we giving a viable presidential candidate constructive criticism or telling a woman that we’d prefer if she shut up already? This isn’t just a conservative issue: I’ve often reflexively found Clinton rather insincere—in spite of the fact that her scandals, gaffes, and half-truths are no more nefarious than anyone else’s.

You might like Clinton’s politics or you might not, and you might have entirely cogent reasons believing she isn’t suited to be president of the United States. She’s hawkish and too cozy with Wall Street for comfort, and there are plenty of people who are bothered by her incredibly late embrace of marriage equality—I count myself among them. But the great mass of criticism that’s built up around her ensures that she’s held to a standard of authenticity and realness that no one expects of any of the men she’s running against.

She’s too calculating? If you don’t think decades-long members of Congress like Sen. Bernie Sanders (I-Vt.) and Vice President Joe Biden know how to run some political calculus, you’re fooling yourself. She’s arrogant and ambitious? Anyone who thinks they should practically run the world probably has a high opinion of themselves. Just because that person is a woman doesn’t make her shrill, nagging or aggressive. It makes her a candidate for the most powerful job in the world.

Photo via cobblucas/Flickr (CC BY 2.0)