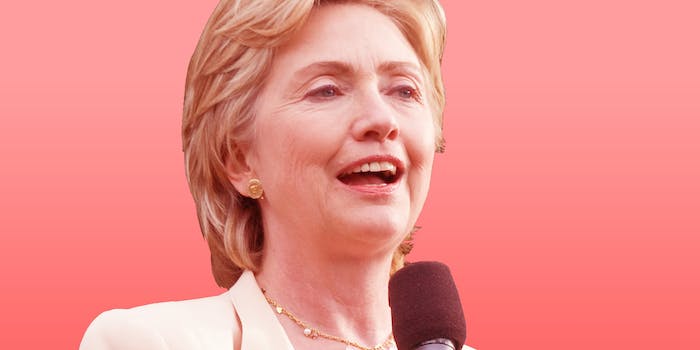 How Hillary will spend $2.5 billion to reform campaign finance

Hillary Clinton's in to reform campaign finance—right after she buys the presidency.

At a cozy campaign event Iowa this week, Hillary Clinton announced that campaign finance reform will be one of the key goals of her administration, along with addressing social inequality, improving conditions for children and families, and examining U.S. foreign policy.

Clinton’s Tuesday event clearly played into her larger campaign aesthetic of being a low-key candidate focused on small, intimate events to reach out to middle-class voters, but making good on the pledge to get money out of politics could be an uphill battle, given the entrenched nature of campaign finance. If she wants to truly reform the way American elections are funded, she can’t rely on Congress and the threat of a constitutional amendment: She needs the Internet, and she knows it, given that she made the announcement via online video.

President Obama has made the use of the Internet almost obligatory in campaigns, but he’s also illustrated how the power of Web culture can back fights for political and social change. Members of Congress faced with presidential pressure for reforms may drag their heels, but an organized and coordinated constituency is a different matter. Even the largest of donors can’t make up for the critical power of a vote.

I believed in her then, I believe in her now. @HillaryClinton #mypresident Me and @ambertamblyn stumping in 2008 pic.twitter.com/z8USWRabdb

This is Hillary reading a text from me that says "with you every step of the way, gurl" #mypresident https://t.co/IpeklQIXzl

Somewhat humorously, Clinton’s campaign will involve a record-setting $2.5 billion U.S. dollars in spending, including her own campaign coffers and those of the Democratic Party. And then there are super PACs like Ready for Hillary and Democratic Action 2016—which she declined to discuss at her campaign event. She’s not alone, with this election likely to involve billions in spending overall as candidates on all areas of the spectrum attempt to woo voters.

The use of Super PACs is one of the most contentious and critical parts of campaign finance reform, as these outside organizations can spend unlimited contributions to support candidates. Their robocalling, mailings, events, and other tactics aren’t subject to the same regulations faced by political parties and candidates, and many push an agenda beyond a simple electoral outcome. Republicans are already jumping on Clinton to criticize the seeming hypocrisy of pushing for reform while taking advantage of the very dysfunctional system she’s condemning.

Republicans depicted Clinton as two-faced for making campaign finance a priority, given that she and her husband, former two-term President Bill Clinton, have raised hundreds of millions of dollars in donations for their various campaigns and philanthropic enterprises. After her appearance, a spokesman for the Republican National Committee, Michael Short, said: “The ‘H’ in Clinton’s campaign logo might as well stand for hypocrisy.”

But the situation is more complicated than that. Hillary Clinton can’t hope to reform campaign financing if she can’t make it into office, and that means working within the broken system in order to fix it.

“Wanting to change the rules doesn’t mean that Clinton is obligated to unilaterally disarm in the meantime,” writes Scott Lemieux for the Guardian. “There’s no contradiction in wanting to restrict the role of money in political campaigns while raising money under the existing rules—and the fact that Clinton is doing the very fundraising that is necessary to seek the presidency in 2016 doesn’t mean she isn’t allowed to argue for changing the system.”

With decades of political experience and Washington connections, Clinton is likely to be able to push something to Congress if she gets elected—but it’s something she can only accomplish by mobilizing the electorate on an Obama scale, with direct and focused online engagement, grassroots organizing, and, yes, massive fundraising events. If she wants her reform to have teeth, and to stick, she can’t stop there. Members of Congress thrive on support from big donors during elections, and the only way to convince them that the costs outweigh the benefits is with the vote itself.

The Internet represents a powerful organizing tool thanks to the rapidity of communication, ease of breaking down information into simple and digestible bites, and large, interconnected communities that act together to achieve common goals. One of the most remarkable is Change.org, home of scores of political petitions that have generated meaningful traction in political debate. The site’s coordinated and heavy users apply pressure at all levels of society and government and could become valuable allies if the campaign reaches out to them.

Clinton would also be wise to look to some of Obama’s tools for Internet engagement. Multiple Reddit AMAs have served him well in terms of connecting with ordinary voters and generating support amongst users of the notoriously freewheeling but also highly organized website. If Clinton can win over members of r/politics, that would create a huge and powerful base for applying pressure to senators and House representatives. That pressure can include direct constituent campaigns flooding offices with emails, phone calls, letters, and more.

Twitter and Facebook provide ideal methods for voter outreach to people who may not be as politically engaged and want the thumbnail version of what campaign finance reform is and why they should care. Clinton’s team needs to work on smart, engaged taglines to reach users who are rapidly scrolling through a timeline, driving them with a call to action, and an easy method of taking action. Those voters can in turn connect with disaffected or disinterested people who can take an active role not just in voting for Clinton, but also advocating for finance reform.

Moreover, Clinton needs to take advantage of transparency in her own campaign, a misstep she’s already made and needs to correct. By being evasive about her Super PAC, she suggested that there was something to hide, and that’s a mistake. Opening up about her finances for this campaign gives her an opportunity to highlight the problems with campaign financing and to indicate that she’s serious about making changes.

Resources like Open Secrets already provide methods for tracing political funding—the site maintains a file on Clinton already—but that data should be available in many places. Being honest about the scope of the problems with electoral donations and funding makes the issue real for members of the public who might view it in the abstract.

She also needs to cast an eye to earlier attempts at reform, including McCain-Feingold, tragically defanged by the time it passed the legislature. At the Washington Post, Robert Kelner and Raymond La Raja illustrate the unintended consequences of the bill, which was designed to limit campaign spending but ended up only creating a broad opening for so-called “soft money” contributions:

The issue was compounded by the infamous Citizens United Supreme Court decision, which opened the door to Super PACs and effectively unlimited campaign contributions. As Clinton rightly notes (and has done in the past), campaign spending is limited to a handful of privileged individuals who effectively determine the fates of elections.

If Clinton wants to succeed in her goal, she needs the power of the Internet to do it. The Web represents a huge pool of untapped talent and resources, with more opening up every day, and her campaign urgently needs coordinated individuals with their own extensive online networks on board to get campaign finance up and running with a clear plan before the election even begins.

While women may have pushed for—and won—the right to vote by taking to the streets at the turn of the 20th century, the Internet is the new streets, and campaign finance is, in many ways, as important as voting itself.