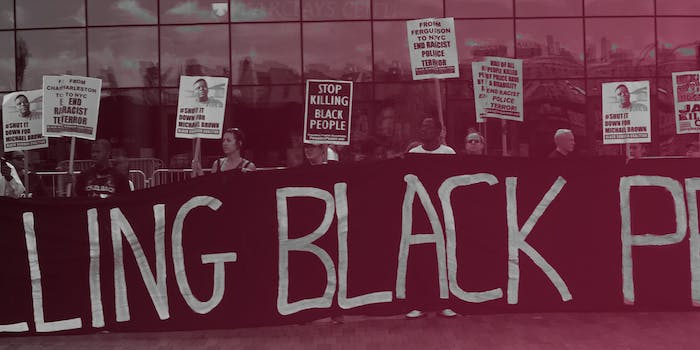 Saying “Black Lives Matter” isn’t enough. That was the message a group of activists hoped to deliver to former Secretary of State Hillary Clinton on Friday, when they interrupted the presidential candidate’s speech in front of a mostly Black audience in Atlanta. As the crowd sang “Hell You Talmbout,” Janelle Monaé’s powerful BLM anthem, Clinton tried to talk over the crowd for another 12 minutes. While noting that she appreciated “their passion and urgency,” Clinton clearly wanted the crowd to listen. “I have some issues to discuss and proposals to make if our friends will allow me to do it,” she said. “They may actually find them to their liking.”

It was a long time coming. After months of mounting pressure, Clinton recently unveiled her platform for tackling institutionalized racism. This included prison and sentencing reform, ending private prisons and detention centers, and backing the “ban the box” movement—which seeks to prevent employers from asking about criminal history until after employment has been initiated. She did not, however, call for the abolition of the death penalty, which the New Republic’s Jamil Smith criticized. “A racial justice platform that omits a call for the end of the death penalty isn’t a complete racial justice platform,” Smith wrote.

If this is any indication, the Black Lives Matter movement isn’t going to stop disrupting Clinton or her fellow candidates just yet—and that’s a good thing. For far too long, the Democratic Party has taken Black voters for granted. That’s exactly what Alicia Garza, the cofounder of the Black Lives Matter Network, told In These Times earlier this year. “Our strategy is to push the Democrats to acknowledge Black people’s concerns,” she said. These sentiments were echoed by David Love in the Grio, who wrote: “Black folks have been the afterthought for Democrats, with policies that could benefit African-Americans but did not necessarily have them in mind or seek their input.”

If this is any indication, the Black Lives Matter movement isn’t going to stop disrupting Clinton or her fellow candidates just yet—and that’s a good thing.

By confronting candidates directly and bluntly, activists are holding allies accountable. After all, the Democratic Party has proclaimed itself the party of civil rights and social equality for over half a century. “That’s why we are having these conversations and we are forcing this dialogue with Democrats: because we’d have a chance to actually reach them,” activist Elle Lucier told the Guaridan.

Lucier is right: Many in the GOP may already be a lost cause. Republican presidential candidates like Gov. Chris Christie (R-N.J.) and Sen. Ted Cruz (R-Texas) wrongfully allege that the Black Lives Matter movement is encouraging violence against police. Meanwhile, conservative critics—like FBI Director James Comey—are spreading the myth that cops, afraid of being accused of excessive force, are nervous to do their jobs in a new (and entirely fictitious) phenomenon dubbed the “Ferguson Effect.”

But to distinguish herself on the issue, Clinton needs to do more than align herself with a movement Christie and Cruz have shunned. Following the first Democratic debate, former Ohio State Senator Nina Turner told the Daily Beast’s Joy-Ann Reid that she “could not help but feel the Democratic presidential candidates believe if they give the shoutout, ‘Black Lives Matter,’ that their obligation to the African-American community has been fulfilled.” Or, to put it more bluntly, as activist Aurielle Marie did, “rhetoric does not save my life.”

But Clinton’s Friday speech wasn’t all rhetoric: It was also the first time she laid out exactly what her approach to racial justice will be. Her chief rival, Sen. Bernie Sanders (I-Vt.) had previously promised a similar approach, as has former Maryland governor Martin O’Malley. The problem with the Democratic candidates’ platforms, though, is that they are addressing the symptoms of structural racism and not the underlying issues. Police brutality and incarceration rates are a manifestation of a culture that criminalize Black bodies and prioritizes white feelings over Black lives.

And while prison reform and ending racial profiling are, as #BlackLivesMatter cofounder Patrice Cullors told CNN, “important and necessary,” they’re not the only target in a fight for racial justice. “I’d like to hear [Clinton] speak about the issues affecting all Black people, not just Black men,” she said. Those issues include the pay gap between Black women and the rest of the population and the epidemic of violence against trans women of color, neither of which gets much lip-service from the Democratic candidates.

Johnetta Elzie of Campaign Zero—a group working to end police violence—summed up the need to go further when she tweeted, “Hillary’s baby steps towards addressing racial justice in a real way aren’t working. She is lagging behind her competition, Sanders.”

And therein lies the problem for all three candidates. They both arrived at this point far too late, and they haven’t come far enough. Clinton, Sanders, and O’Malley have all addressed Black Lives Matter only after activists directly confronted them—and even then they’ve often fumbled. Many activists feel that presidential candidates shouldn’t need prodding to address the concerns of Black Americans. And they shouldn’t. After all, as writer Kellee Terrell pointed out, “Cecile Richards [the president of Planned Parenthood] doesn’t have to go to Hillary with a 12-point plan to campaign for reproductive justice, so why should Black Lives Matter?”

The onus of dismantling structural racism shouldn’t be on people of color, but by the rest of us, including Clinton, Sanders, and O’Malley. This is going to require speaking forcefully and consistently about the issues affecting Black Americans, as well as offer policy measures that do more than score political points. It means addressing not just the symptoms but the causes of structural racism—not just issues affecting some but those that impact the entire Black community. The candidates have come a long way, but there’s still so much further to go.

Photo via The All-Nite Images/Flickr (CC BY 2.0) | Remix by Max Fleishman