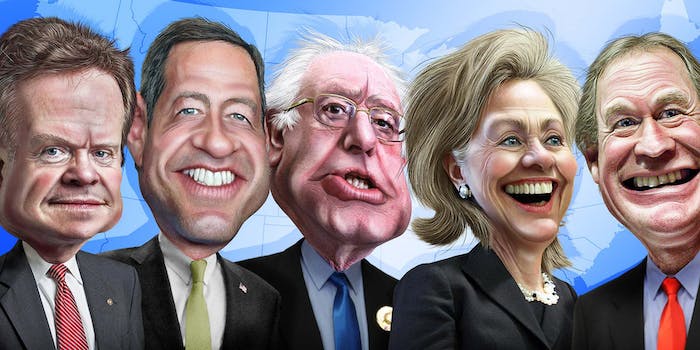 If you want fair presidential elections in America, we need fair debates

Here's the big problem with the 2016 race you should be talking about.

If Democrats want to make the election process as democratic as their party’s name suggests, the best way to do is by having a competitive race among a diverse field of presidential hopefuls. This is especially crucial in a political era where the Internet is leveling the playing field by making candidates’ messages instantly accessible to a wide, digitally engaged audience. Unfortunately, if the current debate rules remain in effect, this will be unlikely likely to happen.

The problem isn’t simply that the Democratic National Committee (DNC) is only sponsoring six debates (which it did in 2008) but that it has also established a rule dictating that candidates cannot participate in debates organized by groups not affiliated with the national party. This means that if a private group or entity were to host a debate, contenders like Sen. Bernie Sanders (I-Vt.) and former Secretary of State Hillary Clinton would be forbidden from attending.

This policy is especially crucial given the decreased number of debates in the 2016 race. Even though there were 17 debates in total during the 2008 election, there will be only slightly more than one-third that number this time around.

If a Clinton candidacy looks like a foregone conclusion, the current debate schedule is unlikely to change that.

The end result? Instead of providing voters with an opportunity to be introduced to lesser-known candidates and ideas by having a large number of debates, the DNC has effectively limited the ability of its own underdogs to reach the widest possible audience. If a Clinton candidacy looks like a foregone conclusion, the current debate schedule is unlikely to change that. That’s not just bad for supporters of Sanders and longshot candidates like former Rhode Island governor Lincoln Chafee—it’s bad for American democracy.

This problem has not escaped the candidates themselves. In an email to his supporters, former Maryland governor Martin O’Malley declared that it’s “time to protest” the 2o16 debates. O’Malley argued, ”It’s frankly undemocratic. Enough tweeting. Let’s take action.” According to Washington Post correspondent Philip Rucker, Sanders argued the debates were rigged to favor Clinton, the current frontrunner. Sanders pointed out, “At a time when many Americans are demoralized about politics and have given up on the political process, I think it’s imperative that we have as many debates as possible.”

Asked if he agrees with O’Malley calling DNC debate process “rigged,” Bernie Sanders says, “I do."

Even Clinton herself realized the necessity of increasing the number of debates for underdog candidates trying to gain a foothold in the primaries. Back when she was falling behind then Illinois Senator Barack Obama in the 2008 race, she released an ad accusing her opponent of avoiding debates so he could duck “tough questions.”

“Both Democratic candidates were invited to a televised debate here in Wisconsin,” the 30-second clip alleged. “Hillary Clinton has said yes. Barack Obama has not. Maybe he’d prefer to give speeches than have to answer questions—like why Hillary Clinton has the only health care plan that covers every American and the only economic plan that freezes foreclosures.”

There is good reason to believe that, given more exposure to the other candidates, Democratic primary voters might change their opinions. Although Clinton has been the presumptive frontrunner since the start of the 2016 election cycle, Sanders has been progressively catching up to her over the past few months. Whereas Bernie Sanders polled at less than five percent earlier this year, he’s leading by nine percent in New Hampshire and rapidly closing the gap in the Iowa contest, where just 11 points separate the two candidates. That’s a big change from the 24 percent gulf between them in July.

This surge largely is to his massive online following, where Sanders has been hugely successful at marketing his plans for economic reform. As Gregory Krieg writes for Mic.com. the crowds Bernie Sanders has amassed in cities like Portland, Oregon and Los Angeles “don’t arrive by accident.” Krieg explains, “In fact, both are largely the result of a broad, digital grassroots effort orchestrated by the campaign itself and enthusiastic volunteer organizers. Sanders and his supporters are now successfully parlaying the powers of social media into meaningful, strategic success on the ground.”

There is good reason to believe that, given more exposure to the other candidates, Democratic primary voters might change their opinions.

While Sanders’ has been successful at tapping into the resources of sites like Reddit, where he regularly leads stories on r/Politics, the Web has unfortunate limitations in the audience it reaches. Although President Barack Obama’s two campaigns in 2008 and 2012 relied on the Internet to help organize support and mobilize followers to get out the vote, Obama’s effort heavily relied on young voters, who are notoriously finicky about turning out on Election Day to cast an actual ballot.

Spreading the message to older Americans on the Internet may be harder—because many of them aren’t on the Internet. Although Web usage among the elderly continues to increase, seniors lag behind all adults in digital literacy. Whereas 86 percent of Americans over the age of 18 are active online, just 59 percent of elderly people are connected to the Web. That’s a huge obstacle for a politician trying to reach not just a segment of the population but as many potential voters as possible.

Televised debates, on the other hand, often pull in a wide, diverse audience of Americans; the first Republican presidential debate this year reached 24 million viewers (not including those following on Facebook and Twitter). This massive, instantaneous influence is why the debates are notable for shaking things up in presidential primary races. In 2008, Clinton gradually lost support to Obama after Clinton had gaffes in several debates that year, such as when she flip-flopped on the issue of driver’s licenses for immigrants.

And for many of the candidates, the debate stage may be their only chance to reach a national audience, as many—like Lawrence Lessig, who recently announced his candidacy—will struggle for basic name recognition, partially due to media bias. Others simply aren’t taken seriously. Whereas Hillary Clinton’s email scandal has dominated headlines, Salon’s Simon Malloy writes that “reporters still don’t seem to know what to do with Bernie Sanders beyond treating him as a foil to Hillary.”

Despite his recent gains, Sanders continues to lag behind in media coverage, depicted as an absurd curiosity. In the opening sentence of a Washington Post profile, Paul Kane and Philip Rucker describe him as an “ex-hippie, septuagenarian socialist from the liberal reaches of Vermont who rails, in his thick Brooklyn accent, rumpled suit and frizzy pile of white hair.”

If Sanders and the other non-Clinton candidates are being treated differently by the media, an extensive, thorough debate process could help change the conversation—giving them the exposure they’re too often denied. A fair election deserves a fair campaign process, and this is likely to be the case unless we demand reform. This isn’t about whether you support Bernie Sanders, Hillary Clinton, or any of the other contenders vying for the Democratic nomination. It’s about letting Americans make their own decisions, rather than deciding for them.

Matt Rozsa is a Ph.D. student in American history at Lehigh University who specializes in studying national politics. As a political columnist, his editorials have been published on Salon, Mic, and MSNBC.