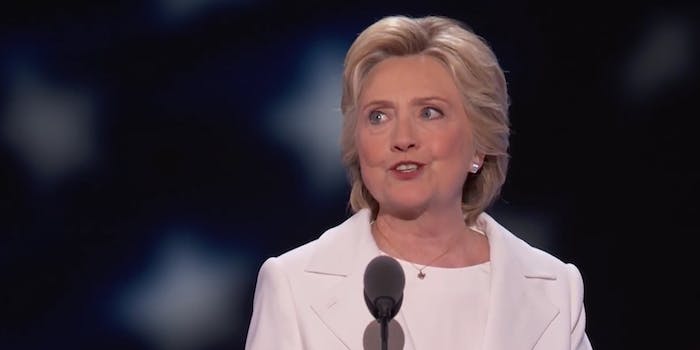 Not a single mention.

Hillary Clinton went for Donald Trump in her historic acceptance speech at the Democratic National Convention Thursday night as she officially became the first woman to win the presidential nomination of a major U.S. political party.

During her time on stage, Clinton covered a lot of ground. Trump attacks aside, she discussed gun control, women’s rights and LGBT rights, the economy, making college affordable, mental health care, systematic racism, ISIS, and she even worked in a Hamilton reference. But some people watching at home noticed at least one important topic missing from Clinton’s speech.

While some held out hope, Clinton’s speech didn’t include a single mention of Harambe, the beloved gorilla who became a Weird Twitter meme after his death in May.

Hillary needs to mention Harambe in her speech tonight if she wants Independents and moderate Republicans to vote for her.

Hillary speech is almost over. Not a single mention of Harambe. #DemsInPhilly

"If you believe there needs to be justice for Harambe, JOIN US!" -a real quote from Hillary Clinton #DNCinPHL #DemsInPhilly

I like to imagine Hillary just made the funniest Harambe joke known to mankind pic.twitter.com/ukGc1wSESU

Don’t lose hope just yet. If Clinton wins in November, she’ll have another four years to bring up Harambe in a speech.