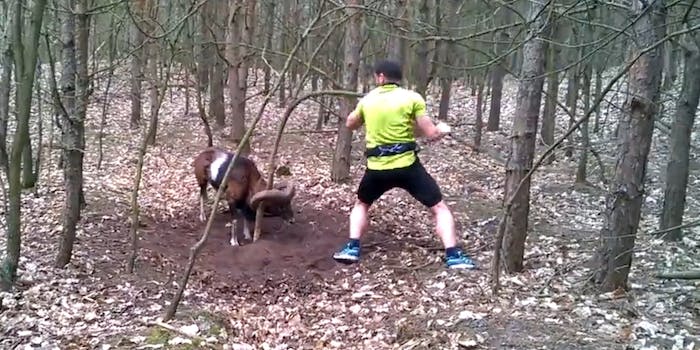 Hiker who rescued trapped sheep is our hero of the day

The animal even said 'thank you.'

It’s widely agreed upon that humans are pretty much destroying this planet in every way possible. But sometimes humans make things better for our fellow creatures of Earth. Hiker Krystof Wlodarczyk’s heroic rescue of a wild sheep definitely qualifies as pretty great.

According to LiveLeak, Wlodarczyk was getting some exercise when his morning jog was interrupted by the sight of the animal in obvious distress. The sheep, a male mouflon, had somehow managed to get one of its curved horns wrapped around a young tree with no way of untangling itself. It’s unclear exactly how long the ram had been stuck there, but judging by the significant damage to the tree and deep gouges in the dirt, the animal had been dealing with the issue for quite some time.

Wlodarczyk, unafraid of the sheep—they are a regular sight along his jogging trail—closed in on the distressed animal and was eventually able to set it free after a few attempts. Once the ram broke free of the tree, he quickly scampered off into the forest, but not before taking a look back at the jogger who had freed him.

“He stopped on a hill, and we measured for a few seconds, amazing,” Wlodarczyk noted. ‘I think it was its way of saying ‘thank you.'”