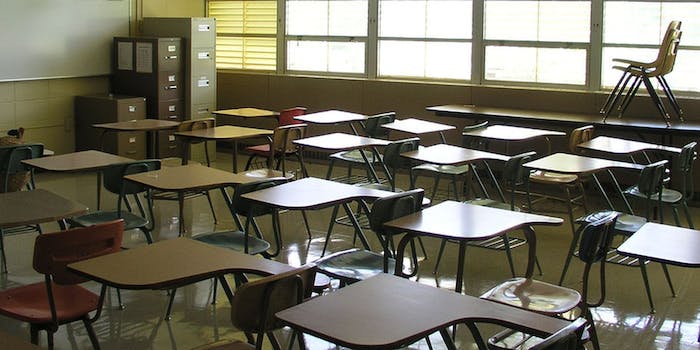 This is no way to get out of an algebra quiz.

Don’t shout “fire” in a crowded theater, and try not to text about gunfire… well, anywhere. Even on April Fools’ Day.

We doubt if April 1 will ever be quite the same for the student who triggered a lockdown and mass alarm at his school by texting the phrase “shots fired.” Also, we wouldn’t hold out much hope for his career in comedy.

Several police departments near Roxana Junior and Senior High School in Illinois learned of the message just after 1pm, a local Fox affiliate reported; officers arrived at the scene along with ambulances, helicopters, and frantic parents, many of whom had been contacted by their kids.

Some 950 students were made to shelter in classrooms, or evacuated from the cafeteria, or simply fled the premises. “People were jumping the fences, people were freaking out, scared cause we thought we were going to get shot,” said freshman Devn Reinke.

The Alton Telegraph provided updates throughout the afternoon: officers swept the building and by 2:20 p.m. had concluded there was no active threat on campus. Early reports stated that authorities had taken three people into custody, but it was later noted that just one “person of interest” was being interviewed by detectives.

There’s every indication this was a bad joke gone horribly awry—though if it’s hard to imagine how it might have gone better. Perhaps the term “shots fired” was being used in its newer, slangy, Internet-ready sense, as in, “wow, you’re gunning for a fight with that tweet.”

Unfortunately for everyone involved, semantics can be a very tricky thing indeed.