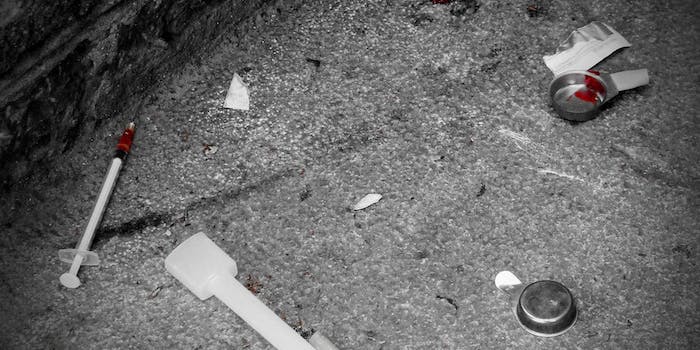 When your friend dies of a heroin overdose, what do you say in the obituary?

The Internet is helping us have a more honest conversation about drug addiction.

On the popular A&E show Intervention, the counselors guiding friends and families through the struggles of addiction always advised them to tell their loved one the same thing: “Stop using, or you will be cut off.” I, too, believed that was how it went: This was how you save someone’s life. I bought the idea that addicts should—that they could—just “stop,” and that was it. It was that easy.

While Intervention encouraged many families to share their pain to find healing, addiction is infinitely more complex, and having a real conversation about it remains taboo. When a heroin addict overdoses, obituaries often euphemize their death: “He died unexpectedly” or “she passed away suddenly.”

With heroin use reaching epidemic levels in the United States, as a report released last month by the U.S. Centers for Disease Control and Prevention (CDC) states, this kind of glossing over is dangerous: While I acknowledge the reasoning behind it, it discourages us from talking about the problem. Allowing those affected to learn, share, and support one another is a critical step toward educating others about addiction and finding effective ways to treat it.

In particular, Internet forums are shedding light on the intricacies of addiction, as increasing numbers of bereaved friends and family have made the difficult decision to forego euphemisms for hard truth. According to a report from Boston.com, more entries on Legacy.com are openly acknowledging heroin use as a cause of death in the obituaries they post for lost loved ones. A quick search for “heroin” on the obituary aggregator site lists several obits that include the term.

“As those who struggle with addiction know, it is a daily fight—hour by hour, as it is ever constant. As her family all try to wrap their heads around how this disease pulls their loved ones back in, [she] succumbed to it on Thursday—but not without a valiant fight,” reads one such tribute. Another writes, “Logan fought substance abuse for 8 years of his short life. He experienced many periods of success, during which he was fully himself; a kind, intuitive, strong and generous young man. Ultimately he lost his battle, and is now another heartbreaking reminder of the heroin epidemic in this country.”

Conversations taking place on the internet help shed light on the intricacies of addiction where previously it lived in darkness.

In Maine, one bereaved ex-husband recently penned a lengthy, 900-word account honestly detailing his late friend’s fight with addiction as well as the many highlights of her life; he also calls out Maine governor Paul LePage and the state’s drug policies. “She was a victim of herself, of LePage’s politics, of our society’s continuing ignorance and indifference to mental illness, and of our society’s asinine approach to drug addiction,” he writes.

Between 2007 and 2013, according to the CDC, there was a 150 percent increase in the number of people who reported that they had used heroin in the last year or had a heroin-related dependency issue. And according to 2013 statistics, heroin use had increased by 63 percent over the past decade. During that same period of time, heroin-related overdose deaths nearly quadrupled.

The report concludes that there is a very probable link between addiction to prescription painkillers and the rise in heroin use. To that end, the U.S. government is making access to substance abuse treatment more available under the Affordable Care Act, as well as increasing education and training for providers.

As the CDC reports, states can address the problem by implementing prescription drug monitoring programs and expanding access to naloxone, an opioid overdose antidote. New programs aim to reform the way the criminal justice system deals with addicts: One local police department’s Facebook post outlining its novel, compassionate approach to area addicts—vowing to help them receive help and treatment for their addictions, rather than charging them with a crime—quickly went viral. It even caught the attention of the Massachusetts state government’s higher-ups.

This reflects a growing understanding of some of the origins of heroin use, yet the effects of the ill-informed War on Drugs as a whole still persist: Federal drug laws currently classify heroin as a Schedule I controlled substance, lumping it together with marijuana and LSD.

The stigma around discussing drug use is so pervasive that doctors associated with the Department of Veterans Affairs are prohibited from talking about medical marijuana, or from even offering their medical opinions about using it. This is despite findings that cite positive effects on people experiencing anxiety, insomnia, and depression.

“We haven’t had that real conversation about how to best use it,” Scott Murphy, the president of Veterans for Safe Access and Compassionate Care, told the Boston Globe. “I shouldn’t have to be my own doctor. It shouldn’t be this secretive,” he added. The White House finally lifted a federal ban on researching the health benefits of marijuana only a little more than a month ago.

Precious little actual scientific research has been thus far involved in the development of addiction treatment methodology overall. As the Atlantic’s Gabrielle Glaser points out, researchers have found the central tenets of Alcoholics Anonymous’ doctrine to be severely lacking in scientific support, while other approaches have been found more effective in treating various kinds of addiction.

The Gloucester police department’s trial run, for example, currently counts 75 addicts in recovery since June 1, thanks to their approach. “Tell us the stories of those you love so that we can gain a louder voice in our representation of the survivors and for those who are still struggling,” a recent post on their Facebook page reads. “Our officers are fighting tirelessly everyday because we believe this is the right thing to do. We need to change this. And we can. With your help.”

The success of Gloucester’s program and their devotion to “tell stories” is an encouraging battle cry for the families and friends whose loved ones are addicts. Internet communities and obituaries readily available online not only help to combat and defy stigma but also help reduce the persistent feelings of guilt and shame that addicts’ friends and family often feel. On internet groups—like Lost to Heroin on Facebook, for example—users find much-needed support in the comfort of strangers.

“So sorry for your loss. Heroin does not discriminate and is truly an epidemic. I lost my son a year ago it’s not easy, hang in there,” one user’s comment reads. Another writes, “Sorry for your loss. I am with you. My fiancé of 7 years lost his life a year ago, leaving behind his kids and myself. It’s hard to deal with, but just remember you have those babies and they need you now more than ever!”

Internet communities and obituaries readily available online help to combat and defy stigma and spread information that could prove crucial.

Michael Duggan, founder of Wicked Sober, a Watertown, Massachusetts-based support group for families and those struggling with addiction, told the Boston Globe that the reason for the rise of internet support groups may be linked to the fact that more families have started to seek out support and join recovery groups before their family member dies. There, rather than blaming themselves or feeling as if they failed their loved one, family members meet and speak with others from different backgrounds who have been through the same trials. “They’re ridding themselves of the guilt and the shame that goes with it,” Duggan explains. “They’re not blaming themselves anymore.”

However, reducing stigma will prove to be yet another struggle for families and friends; the Globe article about honest obituaries garnered its fair share of ill-informed commentary. Yet without more attention, educated information about addiction issues, and a space where people can discuss them without fear, the issue will continue its path toward becoming an unstoppable epidemic.

Ten years after the premiere of A&E’s long-running program started a conversation on drug abuse, it’s time for America to have its own intervention.

Kasia Pilat is an intern at the Daily Dot.