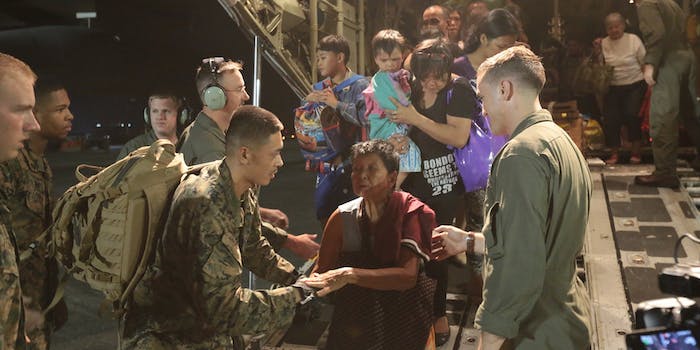 How you can help victims of Typhoon Haiyan

No matter what your social network of choice happens to be, there’s something you can do.

Typhoon Haiyan, one of the most powerful typhoons ever recorded, fell on the Philippines Friday, destroying virtually everything it touched. As of Tuesday morning, 1,774 fatalities have been confirmed; 10,000 more are feared dead. More than 9.8 million people have been affected nationwide, according to the U.N., as aid crews continue to find survivors and casualties. The country’s government declared it a “state of calamity.” International relief is already on its way to disaster zones.

Like with Hurricane Sandy last year and more recent natural disasters in Japan, New Zealand, and Haiti, the Internet is coming together to provide relief. Internet connection is scarce, but Filipinos online are reaching out on social media daily to bring attention to areas affected the most and lists of supplies that they desperately need such as food and clean water. Volunteers are using OpenStreetMap to help rescue workers determine where buildings used to be.

Hugely popular websites from Reddit to Tumblr are finding ways to assist relief efforts. No matter what your social network of choice happens to be, there’s something you can do.

Before Typhoon Haiyan hit, Google hosted a crowdsourced map which located many of the evacuation centers and relief good drop-off centers. Once the storm passed through, the map has been updated to include the islands affected, most of which are located in the central Philippine islands.

If you try Googling how to help those affected by the storm, these links will now appear before any news story.

From here, you can access the official Philippines government website, Google’s Person Finder, and more news and resources in order to stay up-to-date.

If you’ve noticed what looks like a sun in place of the usual period in the Tumblr logo, you’re not alone. It’s the same sun featured in the Philippine flag, and if you hover over it, a message pops up.

Clicking on the sun will take you to the Staff blog, where resources for those affected to find family members or request rescue. And for those not affected, Tumblr encourages them to donate to the U.N. World Food Programme online or through a text message.

A Facebook group aimed to call attention to devastated areas after a storm and gather volunteers has been around for around two years and has come into use once again after Haiyan. Facebook hashtags allow you to search for those asking for aid directly, and Jose Carlos L. Cari, a local Philippine politician in Baybay, has used Facebook to bring attention to devastated areas such as Mayorga, Dulag, Tolosa, and Tanuan, and to update his constituents.

“More people are dead,” he wrote. “Scarce supply of food, water, medicine. People are outraged, taking everything they can get due to lack of supplies! They need medical attention immediately!”

Reddit’s r/Philippines has a comprehensive and constantly-updated list of where to find relief and how to volunteer. More geared towards people who live in the Philippines, it covers operations that are taking place on many of the islands as well as some of the charity efforts set up by major companies and Filipino-American groups.

You can now donate directly to the Red Cross through iTunes, where you can choose to contribute anywhere from $5 to $200. However, you aren’t able to use any iTunes credit to donate. 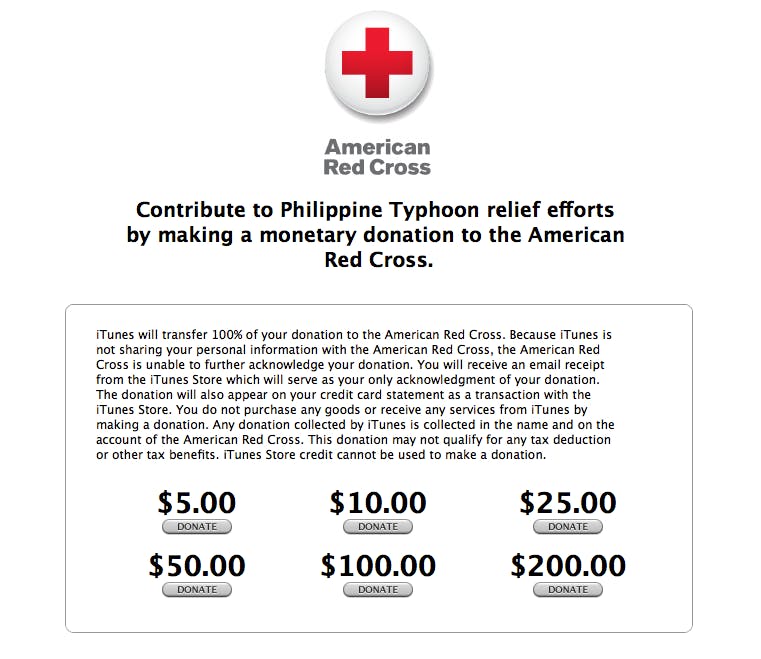 Or, if you’re looking to directly find a charity to help, here are just some of the places that are accepting donations. If you’re not sure whether a charity is legitimate, use Charity Navigator or GuideStar to check credentials and avoid scammers.

Greatest needs of Filipinos affected by Typhoon #Haiyan are: FOOD and water. You can help them now: https://t.co/h5lL88tIOc

Easy way to help typhoon survivors: Text “MED” to 80888 from US cell to give $10 to @IMC_Worldwide #Haiyan Emergency Response efforts

U.S. followers: $184 can give a family emergency shelter in the Philippines. Help tonight: https://t.co/loVUWrJMfu