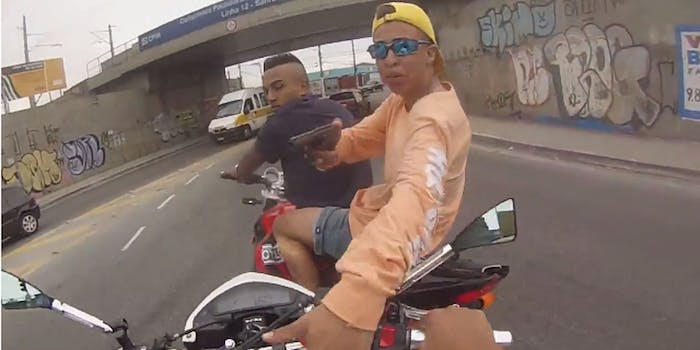 The following helmet-cam footage captures that universal truth with raw intensity. In it, a motorcyclist is hijacked at gunpoint at a stop light. Mere moments later, an officer shoots the robber twice at a close range.

The first-perspective makes it even more unnerving. It’s a jarring look at the random chaos of life, a fleeting glimpse of just how quickly our sense of security can be shattered. (Warning: The video is graphic and NSFW.)

As with dash cams in Russia, helmet-mounted cameras are popular with motorcyclists as a means of insurance, capturing interactions on the road from the driver’s point of view. The rest of the videos by YouTube user Anderson Mangai, which commenters believe to be shot in Brazil—an assumption backed up by the Portuguese used in the title and description—are from his motorcycle as well.

It’s worth noting that the officer acted in apparent self-defense. The following screengrab, as mentioned on Reddit but reproduced below, shows the robber drawing his weapon at the 59-second mark. 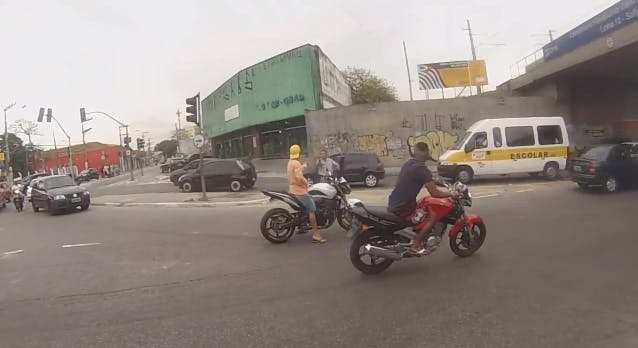 What I find even equally unsettling are the six minutes of video that follow. People are just standing around while traffic buzzes by in the background. It’s almost as if nothing even happened.