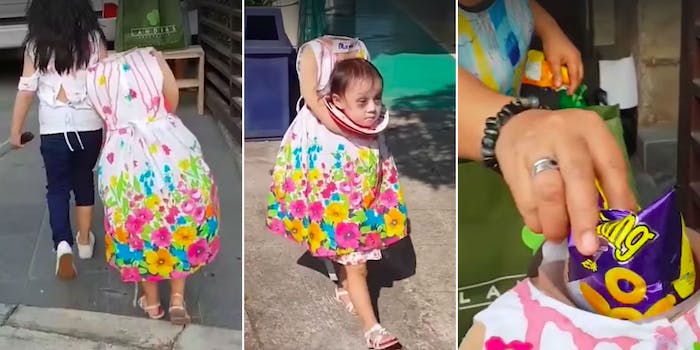 The internet can’t get over this ‘headless’ toddler Halloween costume

This costume is 'aHEAD' of the game.

This year’s award for most innovative Halloween look goes to a toddler who’s completely creeping out people on Twitter—in the most impressive way—with a “headless” costume.

A 2-year-old girl named Maya shocked the internet by walking around with what looked like a severed head last week when she asked for candy in the Philippines’ City of Parañaque, according to the Daily Mail. Complete with a fake neck and arms, the costume gives the appearance of a girl carrying around her own head.

Maya’s face is painted white with dark circles under her eyes to complete the look. When Maya walks up to one house, a woman places chips in her severed “neck,” adding to the chilling effect.

The viral clip shows Maya and her sister Charlie, who is dressed up as a butcher, walking house to house for trick-or-treating. Their mom, Krystel Hwang, dressed her girls in the spooky costumes and uploaded the video on Facebook. It’s been shared with many local stations, and one post received over 12 million views.

Of course, people on Twitter had to share what they thought of the creative and creepy Halloween costume.

The candy in her neck just puts is over the edge for me!

Some speculated that Maya’s sister, who has a machete knife, was the main perpetrator of the crime.

Yup, older sister is the killer

People also threw in some puns to make the conversation even more interesting.

They’re fine. They’re aHEAD of their time. I’m sure they won’t get a headache over this. Nothing to lose your head about. Ok. I have to head out.

Now this deserves a HEADline

This went over my neck

I’m headed over there to see what’s this about

Lets not get ahead of ourselves on all this