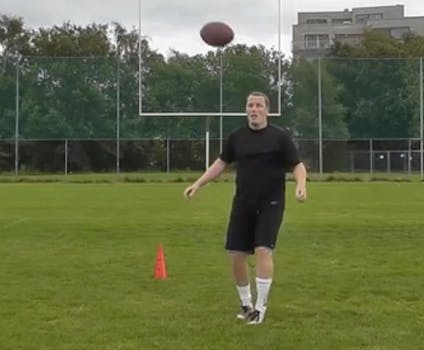 Havard Rugland, Detroit Lions. This has to be the first time in history a Norwegian known in the U.S. only for his trick-shot kicks on YouTube has signed an NFL contract.

This has to be the first time in history a Norwegian known in the U.S. only for his trick-shot kicks on YouTube has signed an NFL contract.

The team announced the signing Thursday evening on its blog, and Rugland himself tweeted the news a few minutes later.

Rugland introduced himself to the Internet in 2012, when his trick shot video went viral. In it, he kicks a field goal from a remarkable 60 yards away. He also completes tricks that are impressive but somewhat less vital in a professional American football game, like landing a football into a moving boat, in a basketball hoop, and to a guy who’s skating away on roller blades. It’s now past 3 million views.

That’s not a guarantee that you can round out your next fantasy team with a guy from YouTube, though. On Tuesday the Lions also signed 38-year-old David Akers, one of the most accomplished kickers in the NFL, to a one-year contract. The two will compete in training camp for the starting job.

Rugland had previously caught the interest of at least two other teams.

One other plays made it big on YouTube before joining an NFL team. “Trick shot quarterback” Alex Tanney, who in college put up very impressive numbers playing very unimpressive Division III competition, signed with the Kansas City Chiefs last summer. He’s yet to see playing time but is still listed on the Chiefs’ roster as a backup.