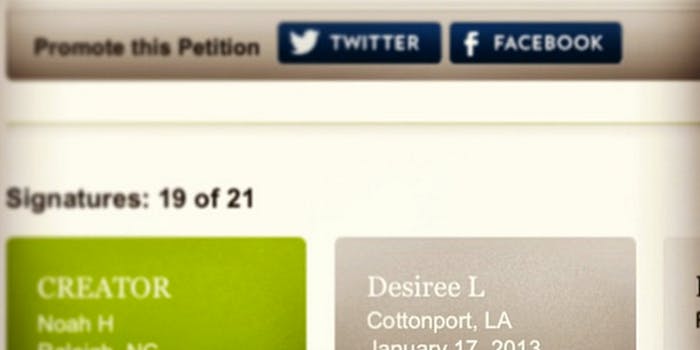 The Hater: We The People are sick of White House petitions

The Hater thinks the White House could do with fewer "hilarious" petition responses and more updates on First Dog Bo Obama.

We the people need to collectively learn how to shut up.

In a pivot to make democracy feel like a focal episode of American Idol, the White House stupidly decided they wanted to hear from us. So they concocted “We the People,” a (very) special subsection on President Obama’s website to hear the public’s ideas.

When the site launched in 2011, the White House foolishly tricked us by saying that they wanted “to hear from you,” and pitching We The People as a perfect way “to take action on a range of important issues facing our country,” not limited to debating if Michelle Obama’s new bangs: hot or not? Hot!

Anyway, the gullible public stupidly believed that the White House wanted to hear from us. Instead of using it as deserving platform to make it mandatory for people to watch the wonderfully underrated comedy Happy Endings, we pitched some of the dumbest things.

The site transformed into a writer’s room filled with loser applicants from the Onion mixed with a low-brow appeal of Big Bang Theory. Ugh, Death Star jokes?

As discovered by Daily Dot writer Mike Fenn, people just pitched the dumbest things in a ploy to be funny. People thought they were so clever jumping on the anti-Piers Morgan bandwagon, trying to get the CNN host exiled back to Britain.

Then he had the petition’s creator, nutcase Alex Jones, on his show and things got weird. How awkward is it for you now to have your name on that “deport Piers Morgan” petition? Does it still feel good to see you sort of near its crazed creator who lives in a perpetually conspiracy-fueled word of nonsense?

Another petition we all wasted our stupid brain on was asking the White House to build a fully functional Death Star to wisely kill all of our enemies in one attack. I guess it’s a Stars Wars reference but the only thing I remember from that bore was falling asleep halfway through the first one.  Also, so glad the 4chan-based petition creators managed to sneak in those Ron Paul references.

“The Administration does not support blowing up planets,” supposedly “hilariously” responded the White House. That time could’ve been better suited releasing an update on cool dog Bo Obama since he’s been suspiciously quiet since his Christmas video.

Anyway, I hate everyone involved. Let’s start with the White House. It’s creation seems like a stupid ploy to act like the cool parent at the sleepover, trying to relate to us by asking us about the “cool, modern technology” we’re using. There has to be a better way than creating a Kickstarter-meets-Change.org website to communicate with us. I have unlimited texting. Can I text you my problems?

Then, ugh, the people signing these things. How awfully bored are you that you’re trolling the White House? We should go back to the simpler times when you rightfully trolled the Westboro Baptist Church. There’s really no good reason to subject Pres. Obama to your painful Star Wars jokes.

Where is the petition to shut this down?