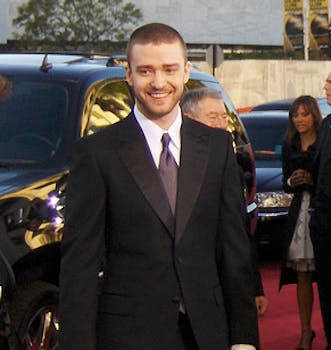 We’re only eleven days into 2013 and it’s quickly shaping up to be the most annoying year ever.

Let’s start with Justin Timberlake. On Thursday, the struggling venture capitalist-slash-singer announced that something big was happening on Sunday. In a cryptic tweet, Timberlake wrote “To whom it may concern…I think I’M READY!” (capital letters are his! The excitement is ours!) with a link to an MTV Cribs-style one-minute long YouTube video walk-through of his fancy house.

Using his best NPR voice, Timberlake talks about how his life is the absolute hardest, how difficult is to make music that he loves, and pontificates on what the next decade holds. It doesn’t appear that Alpha Dogs 2 is in the mix.

“I’m the one that’s obsessive about it before you get to hear it,” Timberlake bizarrely states, apparently not apologizing for releasing your sister’s favorite song, “Cry Me A River.” The rest of the video involves him waxing further philosophical about how hard it is to write music you aren’t embarrassed about.

Timberlake also transformed his site into one big countdown clock that ends roughly around the same time the Golden Globes Awards begin. We have no idea what this means. Maybe he’s just super excited to live-tweet the awards? No wait, it’s probably some dopey love song produced by Timbaland and featuring Jay-Z because, frankly, they’re all underexposed.

Speaking of countdown, and of Jay-Z for that matter, in a celebrity coincidence of epic proportions the Z’s other half, at the SAME TIME on Thursday, posted (personally) a message on Destiny’s Child’s Facebook that they’re back…ish. The album, slated to release Jan. 29, features just one new song, as the rest of the album is unreleased crap.

The Destiny’s Child social media shart flung at Timberlake proved to be the only exciting part of the two announcements. Because the only amusing thing about Destiny’s Child is watching how Beyonce climbed over the others, crushing them in her path to becoming American royalty. Plus, the girls can’t really top “Lose My Breath” and “Survivor,” so why bother? I suppose it’s because Beyonce doesn’t need the money and Kelly Rowland has seen nice success in Europe so it was either this or start a Kickstarter fund to keep Michelle Williams fed.

Returning back to the enigma of Timberlake, who is like bad a case of indigestion that you can’t cure, the odds of him releasing an original-sounding song using Timbaland are as high as my regularly using the new Myspace before Frankie Muniz loses his shit again.

“Beyonce and Justin Timberlake scrolling through Buzzfeed, wondering how they can capitalize on our obsession with nostalgia,” accurately tweeted the must-follow Pilot Bacon.

Call us back when City High reunites.