Resting b*tch face may have had its moment. But what about UBF? Or CCMD?

About 15 (!) years ago, I lived in New York. I was walking to dinner at a friend’s apartment when a homeless woman came up to me and asked for money. I demurred, and she shuffled away, muttering, “Ugly bitch.”

I wasn’t ugly. I was 23. That’s the furthest from ugly most of us will ever get without the help of surgery or airbrushing.

And then there is me at 39. Today, in the most haggard part of the workday, I caught a glimpse at myself in the office bathroom mirror, with its raggedy bruise-colored light from the side and interrogation-bright fluorescent light from above, and wondered, just who is that ugly bitch?

Resting bitch face (RBF) is when your face makes you look bitchier than you are. RBF has gotten a lot of play lately. So much, in fact, that I asked my editor if writing about it for this column had jumped the shark. The reason you’re reading this is because I got the all-clear. Or maybe it’s just the holiday week.

I don’t think I have RBF, though the many strange men on the street throughout my life who have yelled, “Smile!” at me might disagree. (Actually, so would my various female dance and acting teachers over the years, as their plea that I smile might illuminate something vaguely redeemable in my performances.)

No, what I’m pretty sure I have is Ugly Bitch Face (UBF).

I don’t need a mirror on me to know what I look like being approached for money. Or sitting through an endless meeting where a sharp stick in the eye is an increasingly appealing alternative. Or what I look like going through the security line in the airport. Or waiting at the DMV.

Because, you know what? Those scenarios are unappealing. Some asshole yelling “Smile!” should bring out your bitch face. Be proud of it. If you’re displaying pleasantry on your puss in a distasteful situation, you look like a fucking psychopath. 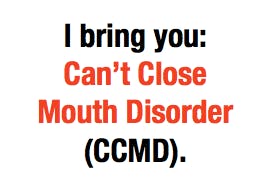 Unfortunately, we have to deal with many, many scenarios that can prompt a bitch face of any kind. And you know what? That’s okay. Please, don’t get plastic surgery to turn up the corners of your mouth. The hell? Don’t smile if you don’t want to! Even if the Today show tells you to!

In fact, let’s forget RBF and UBF and their falsely implied anger altogether and move our face-forward focus to something else. 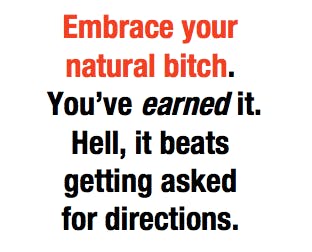 CCMD is not the same as Open Mouth Breathing (OMB), although it’s close. CCMD occurs when someone spends all their time with his or her (because it affects both sexes) mouth just slightly open.

If RBF makes you look mean, CCMD makes you look like a heaping bowlful of duh. At its worst, the CCMD-afflicted resemble the most difficult skee-ball target or the clown-faced last hole at the mini-golf course. Either you have a yawn that got trapped, you’re airing out your teeth, or you really like to re-apply Blistex to a cracked, parched set of lips. It’s annoying, and it’s gross. Shut your mouth!

But, really, why are we even talking about faces? Sooner or later we won’t even need ‘em. Botox is rendering character as irrelevant as a telephone with a base and a receiver. (Or as archaic as the word “telephone.”) We won’t verbalize to communicate. We came from one-celled organisms, and we’ll devolve into them at the end, the most ethereal of creatures, digital wisps, all with the help of technology.

It’s enough to give anyone an RBF.