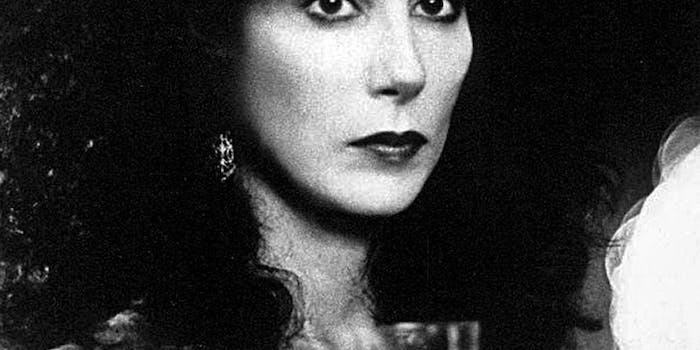 No caps can kill.

My husband and I went to the supermarket earlier than usual this week. Usually we show up close to closing, but this week we arrived around 5 p.m. due to a combination of work schedules, food scarcity, and total serendipity.

For when we were scanning our groceries, we did it to the tune of Cher.

Cher: “Do you believe in life after love?” 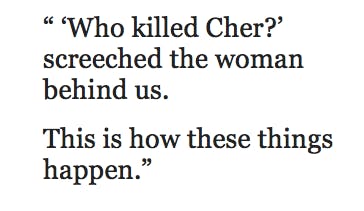 Since he spends most of his workdays off the computer, lifting heavy things and talking to people about them, he shook his head.

“You know how Margaret Thatcher died? Well, there’s a British website ‘Is Thatcher Dead Yet?’ And when she died, they tweeted #nowthatchersdead.”

“The British. They’re all literary and shit. They should know better.”

“What are you talking about?” asked my husband, who still uses the wrong form of “too,” “they’re,” and “your.”

“Few talented individuals—save your for your writer wife and her ilk—are double-jointed enough to hit the shift key. They think all those lower case letters seem thoughtful. Or melancholy. So there was no punctuation.”

“Yes, but there were no caps at all in the hashtag. At all. Ergo, people thought: now, Cher’s dead. Then others picked it up, ran with it, and started capitalizing it correctly—except that when they did, they killed Cher.”

“Who killed Cher?” screeched the woman behind us.

This is how these things happen. 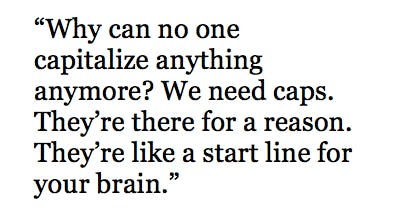 Last year, a woman named her baby “Hashtag.” Sigh, yes but with all the messed up names (including mine) in this sick sad world, it offended me even more that the mom couldn’t spell “weigh” correctly.

It makes me wonder: When is someone going to name their child WTF? And how will that be pronounced? WT, the F is silent? When are we going to get people who insist the first letters of their names are not capitalized? And why am I thinking SanDeE* from LA Story was so ahead of its time (gargh! 21 years ago now?! I went on a date to that movie!)?

Why can no one capitalize anything anymore? We need caps. They’re there for a reason. They’re like a start line for your brain.

Is everyone SO SCARED OF SHOUTING ON THE INTERNET that we’ve completely reverted in the other direction? On Twitter, you really need to throw in one here and there. It’s bad form otherwise. (I’ve got more hate for hashtags being thrown in everywhere for no reason, but that’s another story for another time.)

I don’t even know very much about Margaret Thatcher at all. I didn’t even see The Iron Lady, though I love Meryl—possibly more for beating out Michelle Williams for that awful Marilyn Monroe movie.

I know more pop than politics. At least in the supermarket.

But really, Cher, would it be so hard to let us know you’re all right? Isn’t that what celebrity tweets are for, anyway?