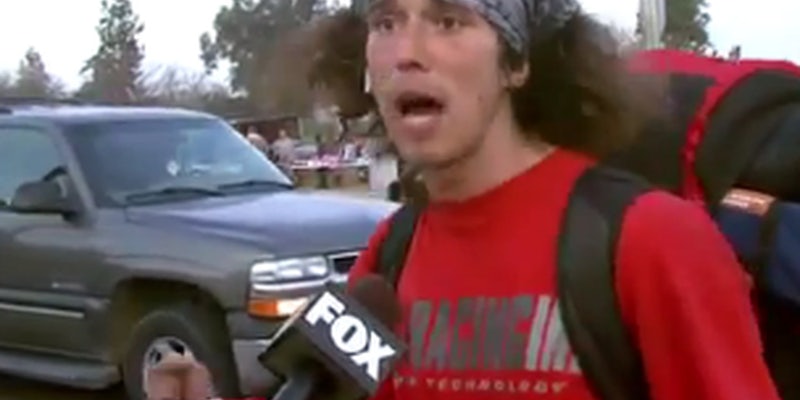 A homeless hitchhiker in West Fresno, Calif., may have saved two people’s lives Friday after they were attacked by a giant, epithet-spewing racist who claimed to be the reincarnation of Jesus Christ.

The bizarre series of events unfolded around 2 p.m. on Friday after 54-year-old Jett Simmons McBride drove his car into the back of a black electrical worker and pinned him to his utility truck.

“I’m Jesus Christ and I can do anything I fucking want to do,” he supposedly told Kai, a hitchhiker he’d picked up, right before slamming into the man.

Apparently intent to finish him off, McBride stepped out of his truck and tried yank him out from between the two vehicles. All along, he spewed more weird racist rants: He was Jesus reborn, and he was here to remove “ni**ers” from the face of the Earth.

Tanya Baker, an eyewitness, ran over to try stop him. McBride responded by smothering her in a bear hug.

That’s when Kai and his hatchet arrived. McBride was 6’4″ and 290 lbs. “Like a guy that big can snap a woman’s neck like a pencil stick,” Kai told Fox affiliate KMPH in a must-watch interview.

At such a disadvantage, Kai came to the only logical solution: “I fucking ran up behind him with a hatchet. Smash, smash, smash!”

We’re not sure, but since Kai went “smash” instead of “chop,” we’re assuming he used the blunt end of the weapon. No matter, it was enough to take out McBride and rescue Baker from his giant embrace. Soon the police and paramedics arrived. The electrical worker was rushed to the hospital, where he was treated for two broken legs. McBride is in police custody and no doubt sporting a few hatchet-sized lumps on the back of his head.

“That was woman in danger,” Kai told KMPH. “He’d just finished what look like at the time killing somebody. And if I hadn’t of done that  he would have killed more people.”

Kai became quite the Internet celebrity after the video hit Reddit Sunday. The original video has since been removed, but we’ve posted a duplicate below.