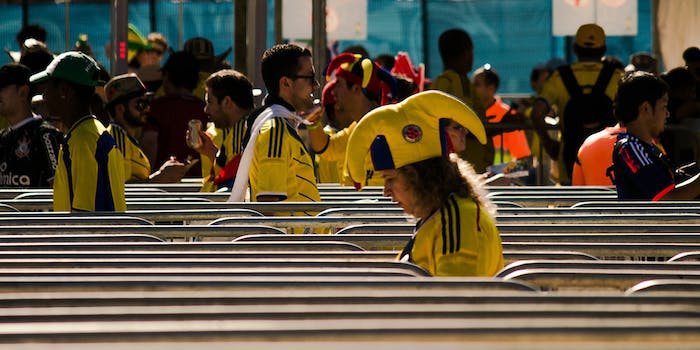 Social media was an active force in campaigning against Russia's human rights abuses in Sochi. In Brazil, it's been silent.

This year, Americans are taking more of an interest in the World Cup than ever before, thanks in no small part to the drive of social media. What was once an abstract sporting event on at a handful of bars with ardent futbol fans is now a phenomenon for Americans—and while many still aren’t sold on it, enough are watching to make it an unprecedented event.

Yet, as people engage with the World Cup on social media at an unprecedented level, there’s one thing they’re not talking about: the high human cost of international sporting events like this one. The hashtag activists, it would seem, have decided to sit this one out. Reporter Dave Zirin of Democracy Now, who was tear gassed while working in Rio on the World Cup, tells an important story that’s not widely heard in the U.S. media. His reporting on the event isn’t about the sports as much as it is about the machinations behind them, and the story he tells is not attractive.

In the weeks, months, and years leading up to the World Cup, Brazil has been ramping up to host not only this event, but the 2016 Olympics. To prepare, it’s been “socially cleansing” the favelas, the low-income communities scattered around Rio. The city’s poorest residents call these communities home, building homes out of scrap material and scrabbling to survive.

Chilling images show the military sweeping in to forcibly remove people before destroying their homes. Thousands of families have been pushed out of their homes with nowhere to go, including those in areas around the stadium, the port, and any areas where tourists might be present. Brazil has even been killing its stray animals, lest they offend the sensibilities of visitors.

It’s a form of whitewashing, designed to present the prettiest side of a city, but it’s also about stratospheric land prices and the realization that the land currently squatted by the favelas could be worth a fortune. After the government displaces people, though, sometimes it doesn’t even do anything with the land, as Zirin reports. He notes that some former favelas lie in rubble, with no new construction or meaningful change.

What’s happening in Brazil has been very well documented in liberal and socialist media; this is hardly Zirin’s first piece on the subject, and after all, he’s also the author of “Brazil’s Dance With the Devil: The World Cup, the Olympics, and the Fight for Democracy.” But it’s not getting out into the media at large, and it’s also not engaging social media—unless you happen to follow a bunch of socialists and Marxists and their lively conversations about Brazil’s actions.

These conversations are like déjà vu for those who remember the 1.5 million evictions that led up to the Olympics in Beijing, or those booted out of the East End to make way for London’s 2012 Games. Meanwhile, in Qatar, where preparations are underway for the 2022 World Cup, much of the work being performed on stadiums, buildings, and other infrastructure is being done by slaves. While Qatar has tried to avoid accusations of human rights violations, the United States just downgraded its status on the U.S. human trafficking watchlist on the basis of concerns about World Cup laborers.

Millions of people are being affected by organized government action as well as unscrupulous landlords and corrupt local politicians in regions preparing to host sporting events. These evictions and disruptions last long after such events are over, making it impossible for people to return home, breaking up communities, and leaving people with crumbling sports infrastructure they can’t even use.

Where is the hashtag activism on this issue? The snappy, pithy tag to slap on to tweets challenging the human rights abuses associated with the World Cup? Defenders say that hashtag activism draws attention to social issues and that this is a good thing, though they seem a bit unclear on what happens after the attention. Others cite “the power of the swarm” and Twitter’s ability to kill book deals, get products pulled from shelves, and make other localized changes.

Hashtag activism has not, however, jumped on the World Cup situation, despite the fact that it’s rife with things that appeal to white liberals: A chance for racial self-flagellation, militarized violence, human rights violations, sad-eyed children displaced from their homes, innocent animals killed under government orders.  Indeed, there is a strange sort of silence on most liberal social media about the World Cup, unless people are talking about the event itself. Nowhere in the discussions about goals and players and advancing is a there a conversation about who is paying the price for the event.

A similar phenomenon was visible during previous World Cups, Olympics, and other major events—with the exception of the Sochi Olympics, which white liberals rallied around because of gay rights issues in Russia, and not for any other reason. Do human rights violations need a media-friendly, easy, hook for people to latch on to before they’re willing to take to Twitter to condemn them?