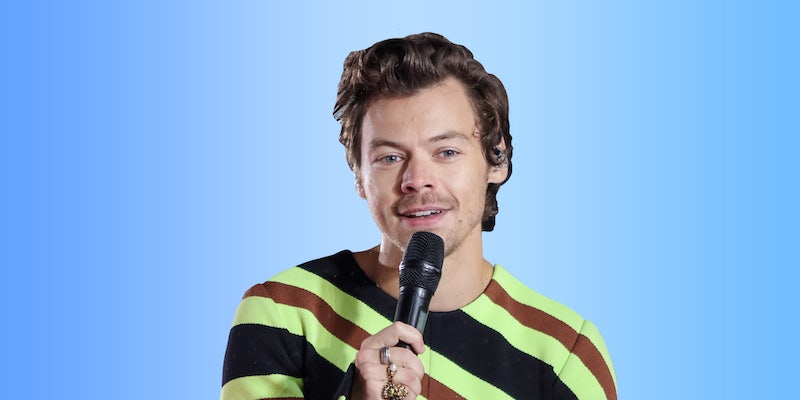 ‘So much of gay sex in film is two guys going at it’: Harry Styles under fire for his comments about gay sex scenes

Harry Styles' description of his new movie 'My Policeman' was not well-received.

When promoting a queer movie, there are certain things an actor just shouldn’t say. Harry Styles managed at least two of them in a new interview with Indiewire, sparking criticism and mockery as soon as the quotes hit Twitter.

In the upcoming romantic drama My Policeman, Styles plays a closeted gay cop in 1950s England. He’s married to a woman but has an affair with a man; a classic narrative for historical movies about queer identity and homophobia.

Speaking to Indiewire, Styles said, “It’s not like ‘This is a gay story about these guys being gay.’ It’s about love and about wasted time to me.” This was a controversial statement because there’s a long history of straight people marketing queer stories as “universal” in order to make them seem more palatable to straight audiences.

This idea of universality is tricky, because while films like Moonlight and Brokeback Mountain have themes and emotional arcs that appeal to a diverse array of viewers, they’re rooted in very specific cultural experiences. Both are about gay men whose lives are restricted by homophobia and toxic masculinity, and it sounds like My Policeman covers similar territory. Denying that it’s “a gay story about being gay” was an insulting statement to many people reading this interview.

Of course, the main issue here was what Styles said about the sex scenes, prompting a dazzling ratio of 16,500 quote-retweets on the original headline, compared to a couple of hundreds RTs. (In other words, thousands of people commenting on and/or arguing with it instead of just sharing the article.)

“So much of gay sex in film is two guys going at it, and it kind of removes the tenderness from it,” said Styles. “There will be, I would imagine, some people who watch it who were very much alive during this time when it was illegal to be gay, and [director Michael] wanted to show that it’s tender and loving and sensitive.”

Basically, Styles is trying to articulate that My Policeman‘s sex scenes will be romantic instead of raunchy. In itself, that’s a totally neutral detail. But he phrased it in a way that feels ignorant about other queer movies and plays into homophobic stereotypes about gay sex being dirty, loveless, or otherwise negative. In reality, there’s a wide range of movies featuring romantic sex scenes between men. This quote says more about Styles’ attitude than it does about the film industry, coming across as defensive and judgemental.

Much of the backlash here ties into Styles’ own public image. Styles prefers not to put a label on his sexuality, and he likes to experiment with bold fashion choices like wearing a ballgown on the cover of Vogue. He has a staunch queer fanbase and a long history of queer allyship. However, some people find this frustrating because they perceive him as a straight man who benefits from appearing sexually ambiguous. A lot of the responses to this interview specifically call out Styles’ fashion sense, accusing him of incompetently appropriating queer culture while secretly holding homophobic views about gay sex.

This backlash has been brewing for a while now, and it’s already gone to some rather ugly places.

A lot of the criticism of Styles’ public image actually plays into homophobic talking points. For instance, insulting him for wearing nail polish and dresses “as a straight man” just reinforces conservative gender roles. And demanding that he “prove” that he’s queer is a very familiar example of biphobia, emphasizing the belief that people are straight until proven otherwise.

Styles’ teens and early twenties were shaped by this kind of scrutiny, thanks both to his role as a tabloid celebrity, and to the persistent conspiracy theories about a supposed romance with his One Direction bandmate Louis Tomlinson. This surely influenced his evolution in the public eye, embracing his queer fanbase while taking a “neither confirm nor deny” stance on his own sexual identity. In the current phase of his career, it seems like he’s just enjoying dressing up and having fun—but as a celebrity with such an ambiguous relationship to queerness, he evokes strong feelings in his audience. Some find him relatable and charming, while others believe he’s appropriating a queer image in a disrespectful way.

So when he comes up with a tone-deaf statement like his comments on My Policeman, it’s immediately inflammatory. This Indiewire interview echoes homophobic ideas that queer audiences have heard many times before, and the goofy phrasing is easy to mock. (Yes, Harry, gay sex is indeed “two guys going at it.”) But the original quote is arguably more clueless than malicious; something that might go unnoticed from a different actor. It provoked strong reactions thanks to people’s preconceived ideas about Harry Styles, suggesting the My Policeman press tour could get pretty awkward before the film’s release in October.