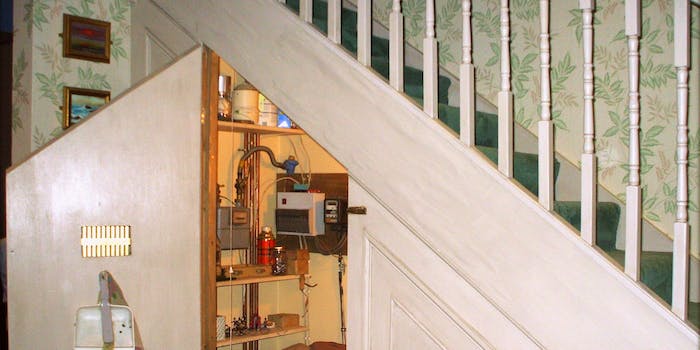 Alex Lomax is having no luck finding an apartment in London, but she did find a rental listing that puts the wand in Wandsworth: a cupboard under a staircase in a Battersea home listed at £500 ($725) per month.

The listing for the property on London2Let currently doesn’t include a photo, but Lomax’s pictures clearly indicate that the room is literally a coat closet.

The advertisement cheerily declares that in addition to paying the exorbitant rent, the renter will also have to pay an additional £60 ($90) in utility and shared living costs.

“We are looking for a friendly, open-minded and outgoing person to join our houseshare in a great period house in Clapham,” writes the ad, reportedly placed by landlord Dan Smith.

“We’re a good bunch and like to chill out a lot together—not really looking for somebody that just wants to stay in their room. Room comes with a bed. Bills to be shared—approx. £60 per month each.”

If you ignore the bit about the “bed”—“mattress pad wedged into a coat closet,” however you say it—at least finding a roommate who wants to stay in their room should be easy, given how hard it would be to get into the room to begin with.

@alex_lomax Is the extra money for some sort of Harry Potter experience?

We don’t know if the landlord had Harry Potter on the brain when he suggested this, but we’re pretty certain you’d need magic to make the most out of this apartment.

Update 12:00pm CT, Oct. 1: Is this real estate ridiculousness too good (or too horrible) to be true? At least one skeptic, after sniffing around on Twitter and LinkedIn, has opined that the story is a likely hoax. But he probably doesn’t believe in magic, either.