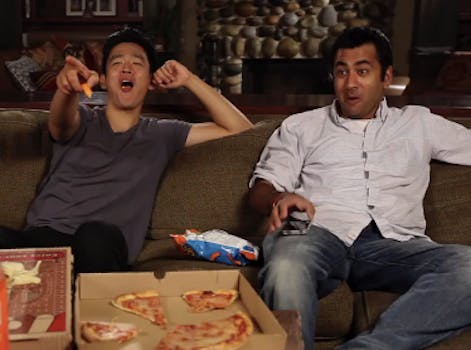 Kal Penn, actor and longtime collaborator with the Obama administration, will host the DNC's live coverage. His Harold and Kumar co-star, John Cho, makes a cameo in the ad.

On Sep. 3, Obama For America uploaded a YouTube video featuring the President making a phone call. “Listen, I need to know if you’re on board,” he says, deadly serious in tone.

At the end of the call, the camera pans to its recipient: Kumar Patel, Penn’s character from the Harold and Kumar film series. Seated on a couch with him is co-star John Cho, reprising his role as Harold. Both stare mindlessly at a TV.

Penn, who has been employed with the Obama administration off and on since 2009, was named a co-chair for the President’s re-election campaign in February. The video serves as an advertisement for live coverage of the DNC, hosted by Penn, which will air on barackobama.com on September 6.

Penn tweeted the video shortly after its release.

“I love everything about this” Sarah Lang wrote when she retweeted the link.

Not everyone was so impressed with the campaign’s advertisement.

“So Obama puts﻿ his faith in stoners? Guess we know why his policies are awful. Only high people can support this idealistic but unpractical president. Now let the thumbs down commence,” commented YouTube user HurricaneKidNB2 on the video link.

The video currently has close to 130,000 YouTube views, and thumbs up outnumber thumbs down 5 to 1.